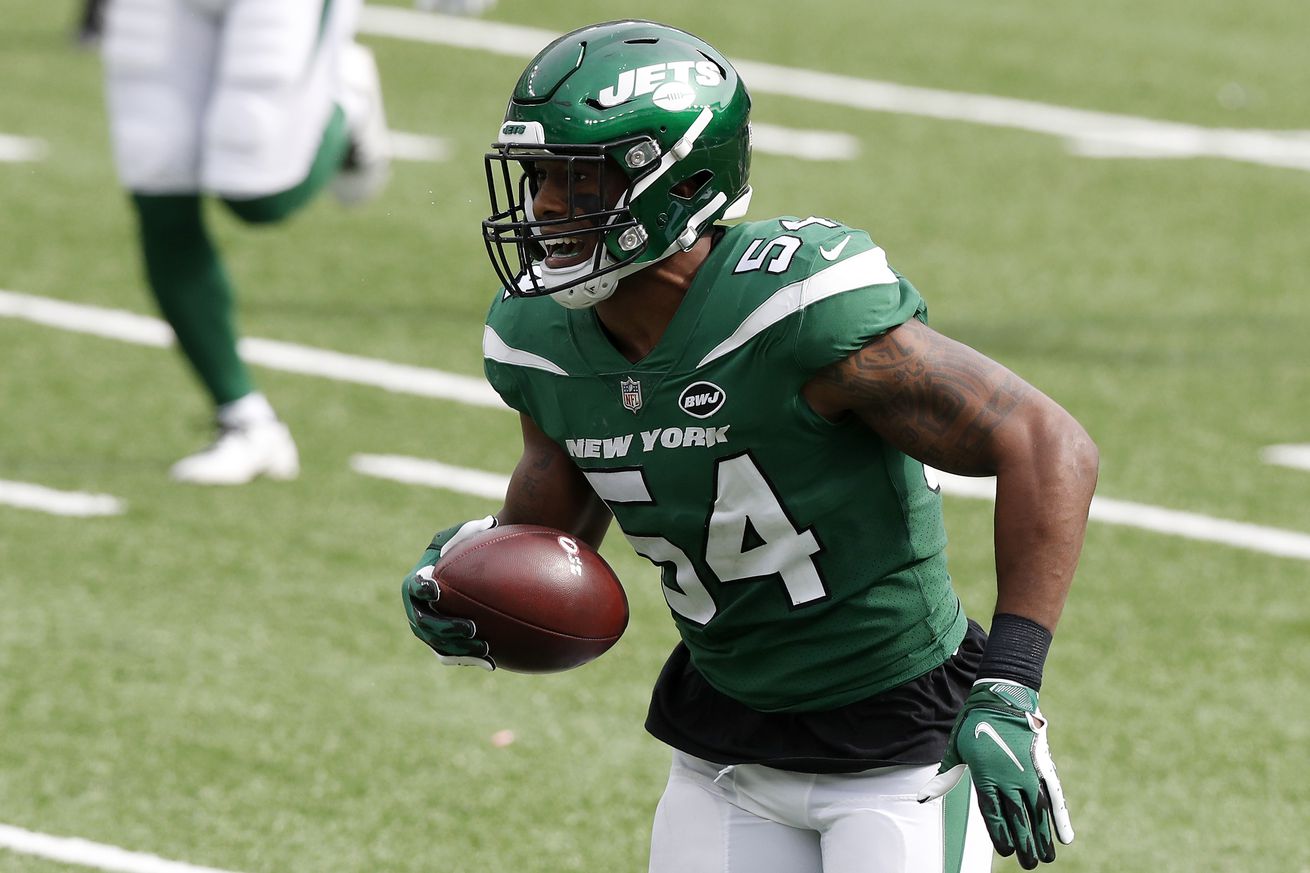 Looking at the Steelers newest defender, and his skill set.

With Devin Bush on injured reserve and Ulysees Gilbert III out with a back injury, the Steelers made a move, trading a 5th round pick for New York Jets linebacker Avery Williamson and a 7th round pick.

In his press conference Mike Tomlin stated that they envision using Avery Williamson as the third inside linebacker, and mentioned his time playing in Tennessee when his defensive coordinator was Dick LeBeau as a positive in his ability to play in the Steelers defense.

Robert Spillane and Vince Williams are both making plays and playing above the line, but with little depth behind them and room for rotational snaps, I wanted to look at Williamson’s film to see what he brings to the Steelers defense, and what his eventual role might be.

The Steelers were the second best run defense in the NFL heading into week 8, but they didn’t leave week 8 in the same spot. The Steelers gave up 265 rushing yards in their win over the Baltimore Ravens, the second highest rushing total in the NFL this season, second only to Cleveland’s 307 yard run game against the Dallas Cowboys defense.

The majority of the Steelers problems stopping the run can be attributed to injuries to key run stoppers, especially defensive tackle Tyson Alualu. But, as I pointed out in my film room on Robert Spillane, it was also partly due to over pursuit to the outside leading to cutback lanes for big gains.

Williamson is a solid gap-shooting linebacker. A player who can get into the backfield and force the running back to change course and force them into the heart of the defense. This isn’t on the level of Vince Williams or even Robert Spillane who frequently make tackles on plays like this, but it is a solid play leading to a good result.

Week 5, 1st quarter, 8:24. Avery Williamson is the linebacker to the left side of the screen.

The Cardinals get an offensive lineman on Williamson, who is able to hold his ground, shed the block to the play side and wrap up the runner for a short gain. Williamson shows a consistent ability to get off blocks and get to the ball. This is an area I would rate him higher than Robert Spillane, but not as high as Vince Williams.

Week 8, 1st quarter, 12:27. Avery Williamson is the linebacker to the left side of the screen.

Williamson navigates traffic, catches up to Le’Veon Bell and flattens his run to the sideline, helping to hold this run to a 2-yard gain. Williamson isn’t as quick as he was before his injury that cost him the 2019 season, but he can run.

One thing that stands out in these three clips and across Williamson’s film is his positioning. Williamson does a great job finding the leverage points in a run, and either attacking the hole or reading multiple lanes and getting off blocks to make plays.

The loss of Devin Bush was a big loss in man defense. Bush is an elite athlete and was used a good bit to cover tight ends and running backs, and that job has fallen to Vince Williams in his absence. It shouldn’t shock you to hear me say that Vince Williams in man coverage isn’t ideal, he’s been playing really well in coverage, but at the same time he is one of the best blitzers the Steelers have, and the defense is far better when he’s blitzing than when he is in man coverage. Can Avery Williamson be a coverage linebacker?

Week 4, 1st quarter, 9:22. Avery Williamson is the linebacker to the top of the screen.

Williamson does a really good job on these routes, on this play evading a pick route to meet Melvin Gordon at the line of scrimmage Melvin Gordon scored a touchdown on a similar pass against the Steelers when he was being covered by Vince Williams.

Here Williamson ends up on a tight end in the slot and easily stays with him on a simple deep route. Williamson can handle most running backs and tight ends just fine in man coverage. But that doesn’t mean he’s going to be a lock down mismatch eraser.

Week 8, 2:24. Avery Williamson is the linebacker to the bottom of the screen.

This is Williamson covering Travis Kelce, and like almost every linebacker tasked with covering the Chiefs star, it doesn’t go well. Kelce creates a lot of space on his out cut and then breaks Williamson’s tackle for good measure.

Williamson is good, not great, in man coverage, a definite upgrade on Vince Williams. Time will tell who is the better man defender between Williamson and Spillane.

In zone is where you find Williamson’s best, and worst film. One of the problems with Williamson’s numbers and bad plays is the New York Jets defense is terrible, and also not very creative. They run a lot of cover-3, I mean a whole lot of vanilla, easy to read cover-3, and that doesn’t do hook defenders many favors in advanced stats. For this section I am more concerned with plays that show his traits than how effective the scheme is.

Week 5, 1st quarter, 3:27. Avery Williamson is the linebacker in between the hashmarks.

I like this play. The Steelers have had problems with tight ends and slot receivers getting behind the linebackers and running free while the linebackers watch the quarterbacks’ eyes. On this play Williamson picks up the crossing receiver and carries him through his zone with really solid technique. His backpedal is good and he looks like a player that might be able to fill some of the harder zone roles that Bush played in the Steelers defense that had to leave the playbook when Bush went on injured reserve.

Week 7, 2nd quarter, 11:57. Avery Williamson is the linebacker lined up on the hashmarks to the top of the screen.

Another one I love. How many touchdowns have we seen the Steelers give up where they just lose track of a player in these exact situations. For a really good defense, it’s far too many. Williamson is able to stay with his player while still stealing looks at the quarterback. Too often the Steelers defenders pick either the player or the quarterback and lock on to them, instead of what you see here. Williamson is covering a key route on this play, and his defense on an extended play is a big reason Josh Allen throws this ball away.

Week 7, 1st quarter, 7:08. Avery Williamson is the linebacker to the left side of the screen.

I don’t know if you can pick up a trend here, but this is another situation we’ve seen burn the Steelers this year. But here Williamson reads the scramble, knows his team mate has to take Allen, and runs to follow, gaining on the Bills receiver making any throw that could come that way a tougher one.

Avery Williamson isn’t a star linebacker, he isn’t a top tier athlete, he isn’t a lock down coverage guy, a dynamite run stuffer and he isn’t a good blitzer. He has an interception on a ball that was tipped right to him, and that’s about it for splash plays.

What he brings to the Steelers is a reliable defender who specializes in preventing big plays more than making big plays. That fits well with the Steelers linebackers who made but also gave up big plays against the Ravens.

Mike Tomlin has stated Williamson will be depth, but considering the Steelers have also said they want to limit Robert Spillane’s snaps and have been limiting Vince Williams’ snaps, I expect some play time for Williamson early on, with a chance to increase his role as the season moves on.

The real value of this addition is the Steelers having three inside linebackers that can play in their 7 man fronts and in nickel, but it is nice to see that he may have more value than that as he becomes more accustomed to the defense.