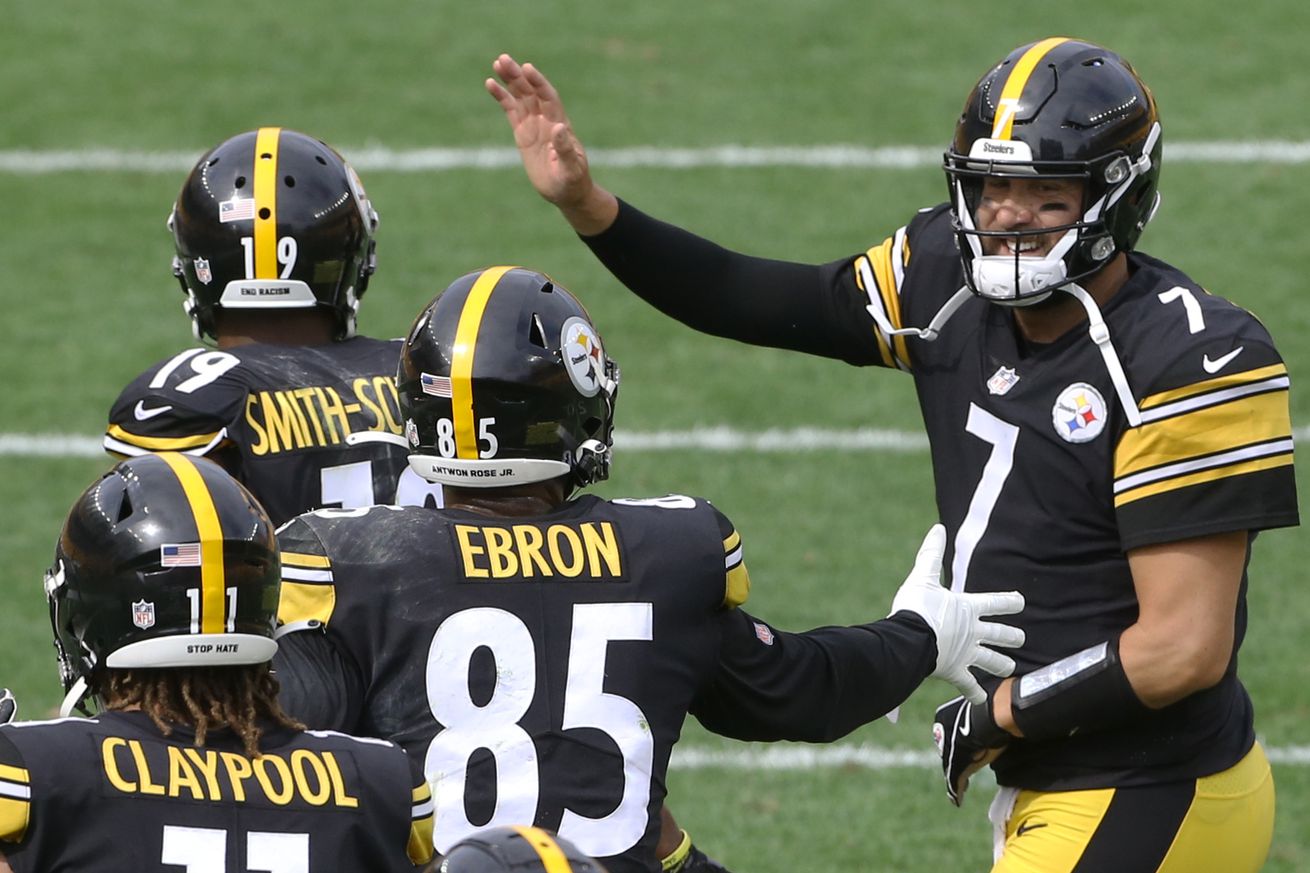 The Pittsburgh Steelers were victorious in Week 5, and the offensive scheming by Randy Fichtner and company are a large reason why.

The Steelers offense exploded for 38 points against the Philadelphia Eagles on Sunday, eclipsing the 30 point barrier for the first time since a December, 2018 game against the Los Angeles Chargers. While rookie receiver Chase Claypool was the undisputed star of the afternoon, scoring four touchdowns and looking like Calvin Johnson 2.0, offensive coordinator Randy Fichtner and assistant coach Matt Canada played important roles as well. The Steelers unveiled several creative play designs that both confused and exploited the Philadelphia defense, most impressively on their opening drive of the second half that resulted in Claypool’s third touchdown. This article breaks down the best of that drive.

Leading 17-14, the Steelers opened the second half with the ball at their own 25 yard line. Ben Roethlisberger converted a 3rd and 5 from the 30 by hitting tight end Eric Ebron for a seven yard gain. On 1st and 10 from the 37, Fichtner dialed up a reverse to Ray Ray McCloud that netted 58 yards and set the Steelers up at the Philadelphia 5 yard line.

The reverse was an obvious attempt to get McCloud, who has proven to be a shifty runner in his brief tenure in Pittsburgh, into space with the football. McCloud did his part, taking the ball through a nice seam in the blocking and sprinting away from Philly’s pursuit. The timing of the call, however, and the way it played off of one of the Steelers’ core designs, were the real brilliance of the play.

Before we look at the reverse, let’s look at this play from the first quarter. The Steelers went heavy on run plays from bunch and compressed sets early on. Here, they motioned James Washington across the formation before running a counter back into the boundary, with left guard Kevin Dotson and tight end Vance McDonald pulling from the right side of the formation. The play only gained a few yards. But this one, and others like it, got the Eagles defense to flow with the pulling blockers.

At halftime, the coaching staff likely looked at how fast Philly was running to the ball (watch the reaction of the linebackers to the pull action in the GIF above). So, they dialed up what is often called a “constraint” play: a play that protects core concepts like power runs or pass plays like Mesh by adding wrinkles to them designed to exploit a defense that commits to taking them away.

Fichtner and Canada’s constraint for counter was the reverse to McCloud. It began with a bunch set that looked similar to many sets the Steelers had employed in the first half. McDonald (indicated by the arrow) was on the inside of the bunch, where the puller would be on the traditional counter run. McCloud (circled) was on the opposite side of the formation in a condensed alignment that made a reverse simpler to execute:

At the snap, Conner ran his counter path and faked taking a handoff from Ben Roethlisberger. Left guard Kevin Dotson pulled, as did McDonald. The true sell of this play was in the first few steps by McDonald, which precisely resembled his steps in the counter play shown above. However, as McCloud came around to take a flip toss from Roethlisberger, McDonald redirected and became a lead blocker, eventually applying an effective kick-out on cornerback Darius Slay (24). Center Maurkice Pouncey and right tackle Chuks Okorafor got downfield to provide clearing blocks, and once McCloud got vertical he used his speed to split the defense before being run down at the five yard line:

With the ball now close to the goal line, Fichtner and Co. did not get conservative. They aligned in a quads set with four receivers in a diamond configuration to one side of the formation and Ebron singled up to the other side. Roethlisberger had the option to throw a quick screen to Claypool, who was at the bottom of the quads set, or to throw slant to Ebron:

For Roethlisberger, this was a simple calculation. Count the numbers, throw to the advantage. Philly walked a linebacker into the alley to defend the slant to Ebron, creating a two-on-one disparity to his side. On the other side, Roethlisberger saw that the fourth defender to the quads set was not wide enough to chase (no pun intended) Claypool to the boundary and figured the three blockers in front of him would adequately cover the three opposing jerseys. That, and the fact that Claypool’s 6’4-238 frame is an advantage unto itself, made this a simple choice. Roethlisberger’s throw was quick and precise and the three big bodies the Steelers flanked out to block for Claypool — Conner, McDonald and running back Trey Edmunds — did their jobs. Claypool walked into the end zone to give the Steelers a ten-point lead:

The Steelers needed all the points they could muster on Sunday, as a plucky Eagles squad made the game close until the final minutes. Interestingly, it was another constraint play, a double move off of a commonly-run option route, that netted Claypool his fourth touchdown and set the final score.

Fichtner’s schemes had a lot to do with the success of the offense, as he kept the Philly defense off-balance with a host of motions, jet sweeps and misdirections. The degree to which Matt Canada has been involved in these wrinkles is uncertain. The offense looks different than it has in recent seasons, however, and Canada, who developed a reputation as a master of disguise during his time as a college coordinator, appears to be playing a significant role.

The Steelers will need to keep finding ways to get into the end zone with the high-scoring Cleveland Browns coming to town next week. Stay tuned for our preview on Cleveland coming soon. In the meantime, enjoy the 4-0 start and the fact that this Steelers’ offense, with a healthy Ben Roethlisberger, an array of weapons and a scheme that is suddenly fresh and compelling, could be one of the best in recent memory.