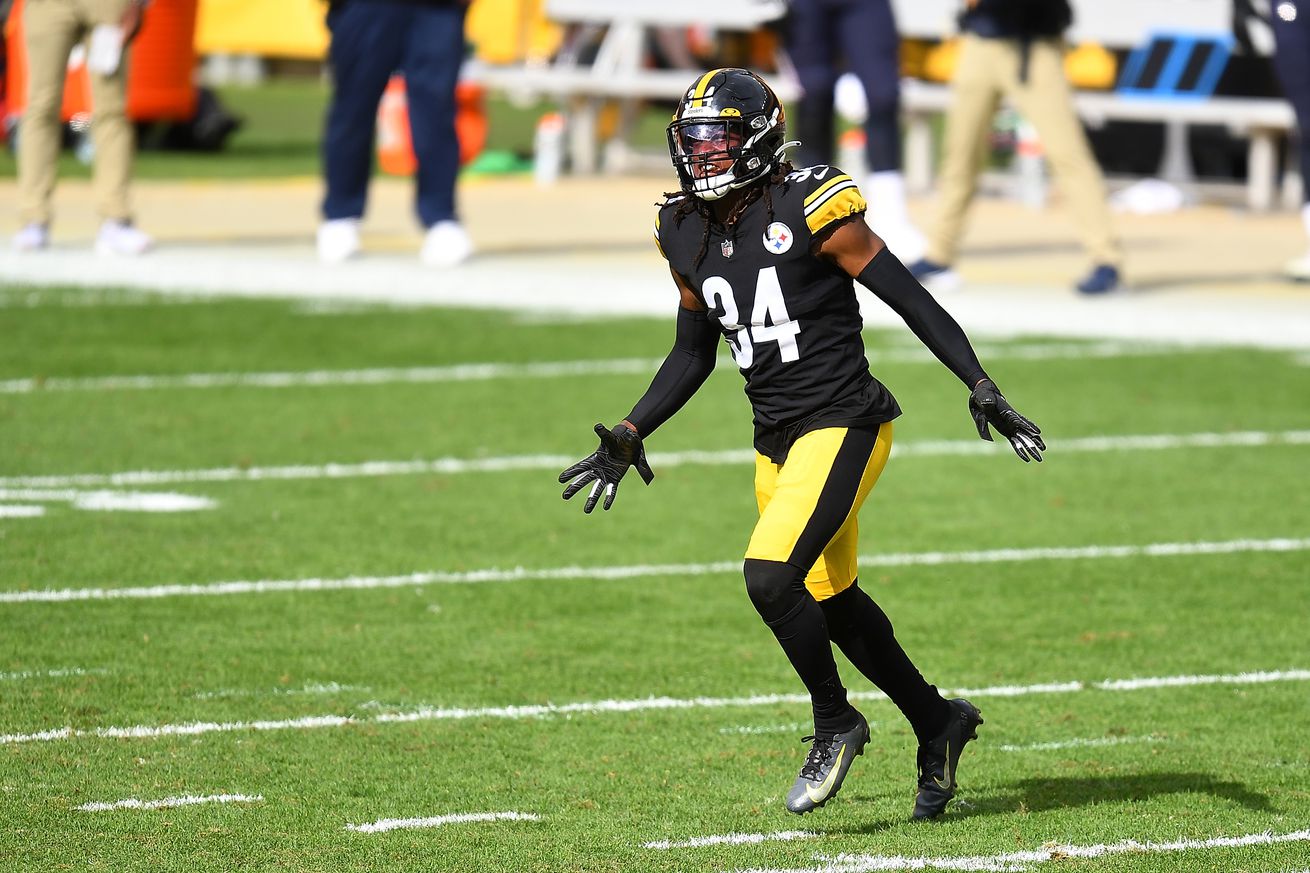 Looking at the successes and failures in how the Steelers defend tight ends.

The Pittsburgh Steelers defense in 2018 was getting burned regularly by athletic tight ends. Travis Kelce, Jared Cook, Austin Hooper, even C.J. Uzomah recorded at least 50 yards against the Steelers, with both Cook and Kelce passing 100 yards.

That offseason the Steelers brought in Mark Barron and drafted Devin Bush to improve their tight end defense, and it worked, the Steelers allowed 57 yards to George Kittle and 100 yards to Hunter Henry in a game that Mark Barron and Steven Nelson missed, and both Joe Haden and Devin Bush missed chunks of the game to injury. The 2019 Steelers allowed the 3rd lowest DVOA (courtesy of Football Outsiders) to tight ends in the NFL. After the Steelers let Mark Barron leave and didn’t replace him, fans (including me) assumed that Ulysees Gilbert III, or safety turned linebacker Marcus Allen would take over that role in the defense.

Neither of those players have even played a snap on defense this season, and yet the Steelers currently rank as the 3rd best defense against tight ends according to DVOA. It shows up in regular stats too.

Opposing No. 1 tight ends the Steelers have faced have a combined stat line of 8 receptions on 15 targets for 94 yards and 1 touchdown. 6.3 yards per target and 31 yards per game to tight ends that have each averaged 40+ yards against other teams this season.

The Steelers have the answer to athletic receiving tight ends, even with Mark Barron no longer on the team.

Week 1, 3rd quarter, 7:15. Evan Engram is the tight end farthest to the top of the screen

Evan Engram is locked down on this play. Terrell Edmunds stays with him through his out cut and is still on him when he turns upfield. At no point is Evan Engram a viable target on this play, and it matters, because the play was designed for Engram to beat that coverage. Look at the play again, there is only one route to that side of the field.

Engram is Daniel Jones’ primary read, and Saquon Barkley slipping out the back of the pocket after the play action is his safety valve. Barkley was wide open, while Terrell Edmunds had Engram locked down.

Again Terrell Edmunds is on Evan Engram, and Engram has to push off to gain the separation he needs to make the catch. It’s an easy call for the refs and they manage to not mess it up.

Week 1, 3rd quarter, 9:52. Levine Toilolo is the tight end second from the top of the screen.

The Steelers have Terrell Edmunds matched up on Saquon Barkley here, and Toilolo slips the defense in the play action fake, Terrell Edmunds runs him down ahead of Minkah Fitzpatrick to limit this play to 13 yards, it was the longest play by a New York Giants tight end on the day, despite the Giants frequently using three tight ends.

Terrell Edmunds mirrors Fant easily, staying with him through the out cut and his turn back to the inside. Edmunds will struggle against receivers with elite change of direction ability, but even the best tight end isn’t going to cut quick enough to shake Edmunds.

Edmunds delivers perfect coverage, but this play is made by Devin Bush’s blitz getting to the quarterback. Take a look at the pre-snap communication on this play.

Terrell Edmunds, Cameron Sutton and Devin Bush are together, talking to start the play. Bush and Edmunds were involved in a decent bit of miscommunication in 2019, but here they sort it out quickly and it ends with Sutton deep, Edmunds locking down Fant and Bush disrupting Drew Lock’s throw.

Steven Nelson and Terrell Edmunds have both deep routes on their side locked down as Edmunds shows again he can handle even the most athletic tight ends deep.

On this play Terrell Edmunds is in deep zone to the bottom of the screen, and Noah Fant is matched up on Steven Nelson. The Steelers have Minkah Fitzpatrick forward a bit, getting him out of the deepest defender role as the Denver Broncos approach the redzone. It doesn’t look like the Steelers are running a switch between Fitzpatrick and Nelson here (Nelson would be dropping deep middle if they were) this is just Nelson in man getting beat and Fitzpatrick getting a foul trying to bring down Fant.

When the Steelers pulled Edmunds off of Fant it showed that they really didn’t have other solutions for him. This may also help highlight the slow statistical start to the season Minkah Fitzpatrick has had. When the team puts Fitzpatrick in the role of deepest defender, opponents can avoid him, and when they put Terrell Edmunds in that deepest defender role, the Steelers not only have a weaker deep defender, they also have trouble defending athletic tight ends.

Watch the Steelers defenders to the bottom of the screen. Especially Devin Bush (In the box, on Fant to start) and Bud Dupree (lined up over the slot). This is a pattern match zone the Steelers run a lot to counter 3 receivers to one side. If you count receivers from the bottom of the screen to the offensive line, the outside receiver is #1, the slot is #2 and the tight end is #3. The switch between Dupree and Bush is determined by the #3 running outside. Bush is off the line and vulnerable to picks, and he has to chase the #3 outside. Dupree is already out there and can easily pick up the #3, while Bush is then in a great spot to pick up the #2 receiver who is running up field. You can see the #2 run at Bush before cutting upfield, not only does Bush need to get outside quick to cover Fant in the flat, he’s got an offensive player in his way. Without this switch Fant is going to be open.

That matters because of the play you are about to watch, where the formation is tighter and the personnel different, but the defense and the defensive reads look to be the same.

Week 2, 3rd quarter, 1:11. Noah Fant is the tight end to the top of the screen, Melvin Gordon is the runningback.

This is Noah Fant’s TD when the Broncos got Fant matched up with Devin Bush. But Bush shouldn’t be covering Fant here, Either Terrell Edmunds or Mike Hilton should be taking that job, dropping outside and covering Fant if he runs an out or a corner route. But neither drop, both cover the runningback. Here’s where the rules for the Steelers pattern match come into play.

Tyler Wise did a great job breaking down how the Steelers pattern match (can be called Cover-3 Mable or cover-6 depending on who you are talking to) in this film room from after the game. He does a great job showing all the responsibilities of the players on that play. He concludes that Terrell Edmunds should have dropped to cover Fant on the play, and I think everyone can agree that would be the best result. But look at the timing of the offense on that play, I think there is more to it, I don’t think this is a blown assignment by anyone, it is a great job by Denver to attack the Steelers defensive tendencies.

I’ve covered before how good Mike Hilton is at being aggressive and attacking forward, and also that he will err on the side of attacking and being aggressive. I’ve also covered the number of times both Hilton and Edmunds have been involved in miscommunications. It comes together with what Melvin Gordon did to the Steelers on this play. Go back up and watch the running back, that’s an out, but how quick is that out? The timing of his cut is really important, because until he cuts outside he’s Terrell Edmunds man, once he is seen going outside you can make the case he is Hilton’s man, but before that he is Edmunds’ responsibility.

Now look at the exact frame where Melvin Gordon’s step shows he is about to cut outside.

Gordon is stepping into his cut with his outside foot, and Fant is already past both Hilton and Edmunds. Melvin Gordon times his cut after Noah Fant passes both defenders that could be tasked with covering him.

Minkah Fitzpatrick called it a scheme bust, and that’s what it looks like to me too. It looks like Gordon slowed his route down until Fant got past both Edmunds and Hilton. Minkah Fitzpatrick also stated that they made adjustments after that play and the 2-pt conversion to fix the problem.

This is the only other time the Broncos ran a similar route combination again in that game. You can see the adjustment, Devin Bush covers Fant as soon as he goes vertical, and Terrell Edmunds covers the running back from the start. This “solution” to the scheme problem still ends up with the exact same problem, Devin Bush coming from the inside to cover Noah Fant who is running a corner route. Bush does well here, there really isn’t much more he could do, he got to Fant, and got underneath him to make the pass a tough one, but Noah Fant makes the play and the Broncos get their second 20+ yard play to their athletic tight end.

I wanted to spend time on those two plays because they are two of the three longest pass plays to tight ends the Steelers have given up so far this season. The third was to Jordan Akins in week 3, on a play where Deshaun Watson scrambled, holding the ball for 7 seconds before finding Akins breaking free from Mike Hilton’s coverage. Terrell Edmunds came up to make the tackle.

The Steelers defense is holding opposing teams tight ends to below their average production, and rank 3rd in DVOA against the position. Furthermore, when Terrell Edmunds is covering those tight ends they do next to nothing. The two passes to Fant and the 20 yard pass to Akins account for 62 yards and a TD, and all involve Terrell Edmunds notably not covering them on the play. The better adjustment after the Fant touchdown probably would have been to tell Devin Bush to chase down any fast outs from the running back and just stick Edmunds on Fant. Hopefully the Steelers have learned their lesson, because how well the Steelers can cover top tier tight ends will be an enormous factor in their next game, when they will face Zach Ertz and the Philadelphia Eagles.