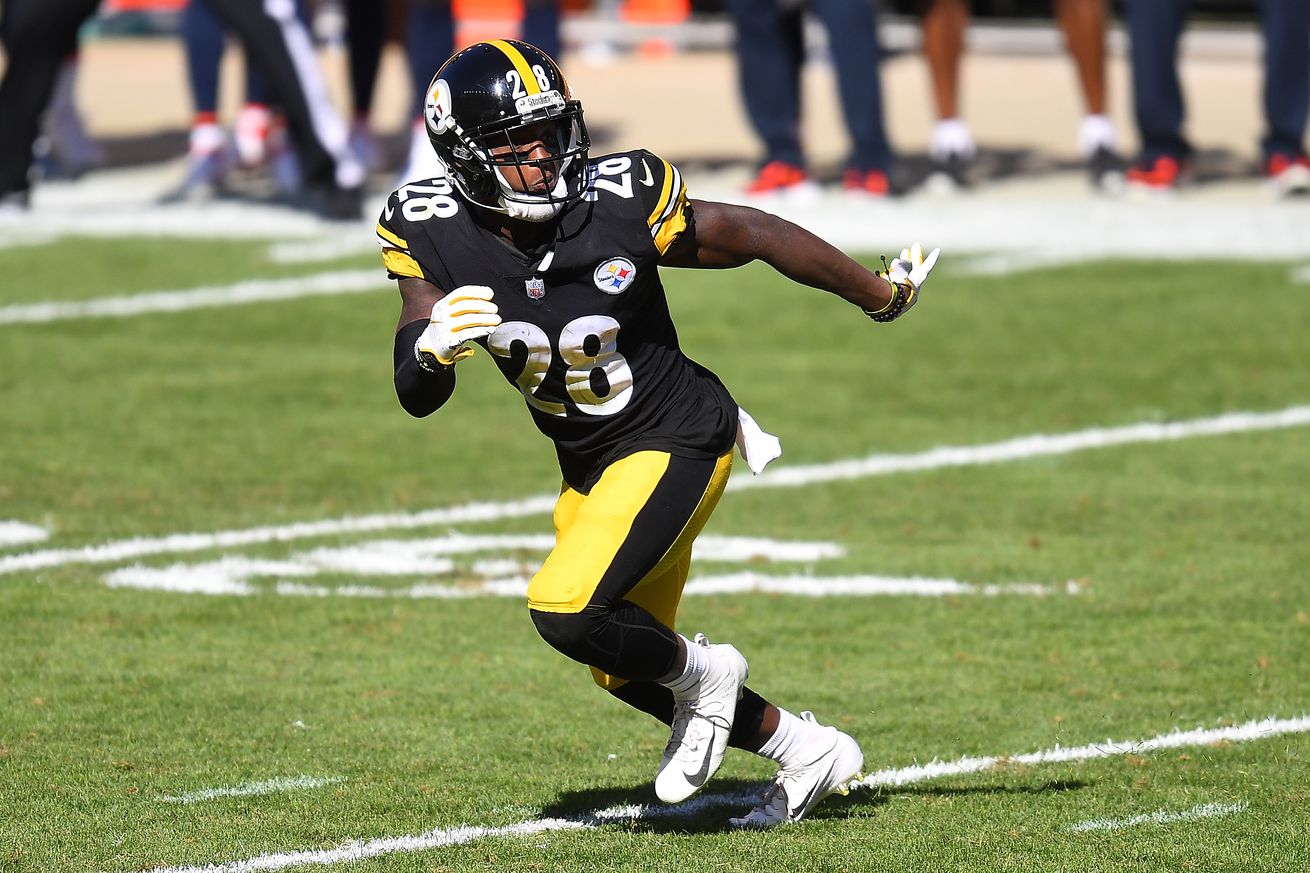 Mike HIlton is playing every position and it matters more than you think.

That’s been true for a while, but in 2020 the Steelers are pushing that much farther than in previous years. We see that on offense where wide receivers have 86 yards and a touchdown rushing, we have seen Terrell Edmunds line up as a receiver in a bunch formation, we’ve even seen rookie guard Kevin Dotson come in as a second eligible lineman.

On defense the Steelers are pushing their players to be more versatile than ever, and it has shown up on film with good plays, and with bad plays.

Mike Tomlin lover small players that hit hard, defensive backs that think they are linebackers. That’s why the Steelers draft players like Antoine Brooks Jr., and it’s why a player like Mike Hilton has become one of the most valuable slot defenders in the NFL.

Look at how far out Hilton is lined up. Look at how few steps the running back takes before Hilton has his legs. This play is ridiculous. This angle shows the distance covered really well.

But to get an appreciation for the way Hilton adjusts to, and finishes the play look at it from this angle.

Watch Tyson Alualu, the defensive tackle to the right side of the screen. He holds his ground, and by the time the running back gets to him Hilton has the running back’s legs.

Look at Hilton alter his path, getting really low to change direction without losing speed, then wrap and twist Miles Sanders legs. Watch it 5 or 6 times. You don’t get to see a play like this every week, unless you are a Pittsburgh Steelers fan.

If the Steelers line up Terrell Edmunds behind Mike HIlton and you don’t have a blocker dedicated to Mike Hilton he’s going to wreck your play.

Week 5, 4th quarter, 6:19. Mike Hilton is the slot defender to the top of the screen, Terrell Edmunds is lined up behind him.

The Philadelphia Eagles learn from their mistake, they see Hilton is coming, and their left tackle leaves Bud Dupree to be blocked by the guard and he blocks Hilton. Normally this leads to easy yards as the slot receiver is being covered by a safety who is giving him 10+ yards of cushion. This time Terrell Edmunds is up to the challenge and breaks up the pass.

Look at that break up, in the current NFL that could be called pass interference and not make the fans list of worst calls in the game. It is incredibly hard to crash that route fast enough to make the play and even harder to make sure you time up contact so you don’t get a penalty. Most of the time these routes are easy yards with Terrell Edmunds flying in to make the tackle.

On the Miles Sanders touchdown run in the first quarter, the Steelers used a different defensive back as the slot blitzer.

The Steelers switch Cameron Sutton and Mike Hilton’s roles on this play, Sutton blitzes, HIlton plays dimebacker and neither makes the play. Look at the difference between Hilton’s run blitz above and Sutton here. The Steelers know teams are used to Mike Hilton blitzing, so they want to be able to mix it up, but Sutton isn’t in the same league as Hilton as a blitzer, and Hilton isn’t as good at dime backer as Cameron Sutton is.

That’s not the only time the Steelers switched Sutton and Hilton’s traditional roles in week 5.

Week 5, 2nd quarter, 1:10. Mike Hilton is the slot corner to the top, he starts dropping back right before the snap, Cameron Sutton is in the same spot, on the opposite side of the field.

The Steelers run their cover-3 variation I call their “tent” defense here. They rotate into the tent a little differently, and send Mike Hilton deep and keep Cameron Sutton up and on the outside. Mike Hilton had an interception in week 3 when he was playing deep like this. The Eagles see this same defense and attack Cameron Sutton.

Sutton isn’t guarding the first down line, he’s well in front of it and Travis Fulgham makes one of his many catches on the sideline for a third down conversion. The cornerback’s job is to not get beat deep, the underneath defender has to protect that first down line, keep the play in front of them and tackle the catch to force 4th down. Mike Hilton does a great job in that role, Cameron Sutton is much better playing the deep middle.

The Steelers are trying to build more versatility, to be less predictable and allow them to move players like Minkah Fitzpatrick around more without the other team being able to predict where Minkah will be. Plays like these are the growing pains the defense is going through as it tries to evolve.

Week 5, 2nd quarter, 11:45. Terrell Edmunds is the slot defender to the bottom of the screen.

The Steelers are in their 3-4 set, and they line up Terrell Edmunds in the slot. When the receiver goes in motion, that coverage responsibility is passed off to Vince Williams, and Terrell Edmunds does his best Vince Williams impression, reading the run outside in, filling the lane and meeting the back with enough force to stop his momentum.

Terrell Edmunds isn’t the same player as Mike Hilton, but they are both players who can cover in the slot and also bring linebacker talents into the box.

This is what the Steelers want in their interior defensive backs, from their slot corners and especially from their safeties.

A few ties a game, the Steelers have been subbing Terrell Edmunds out and playing Mike Hilton at strong safety. You can see here that it is a natural fit for his talents as similar to the Edmunds play above, Hilton is responsible for covering the slot but is strong in run defense as well.

If you saw my film room from yesterday focusing on Minkah Fitzpatrick, you may see this play and think that Mike HIlton’s role on this play would also be ideal for Fitzpatrick. Minkah Fitzpatrick is a dynamic defender when he is able to read the play in front of him and attack it. He is an elite talent, and versatile enough to also be the Steelers best free safety, but that role doesn’t play to his real strengths.

The truth is the Steelers have three really good slot linebackers on their roster right now. Minkah Fitzpatrick, Terrell Edmunds and Mike Hilton. The Steelers best showed this in week 3 of last season, when the Steelers truly used both safeties as both free and strong, and they alternated based on the offensive alignment. I covered that and the results in this film room from the offseason (the last third of the article covers that game and the results). For a quick summary, Minkah Fitzpatrick isn’t a great blitzer, and Terrell Edmunds is not a good single-high safety, and the Steelers never tried it again.

That is not the way. Fitzpatrick is a good, not great tackler, and he will occasionally do something like this. As a slot linebacker his linebacker side is more of a Mark Barron than a Vince Williams or Devin Bush.

There is a natural fit for Minkah Fitzpatrick on the field, but the Steelers rarely use it, and it leaves them exposed at deep safety.

Week 5, 2nd quarter, 0:27. Minkah Fitzpatrick is the safety to the top of the screen.

This is one of the many plays the Steelers run in their “prevent” defense package. Minkah Fitzpatrick comes up in a shallow middle zone, he’s playing a robber role, just a little deeper because of the situation. Terrell Edmunds is the deep safety, and it is fine here because of how incredibly deep he drops, at that depth he doesn’t need to react to the play quickly, he’ll have a lot of time to get to the catch point.

If you look at the defensive front on this play the Steelers rush 3, have Vince Williams spy on Carson Wentz (more about keeping him in the pocket than stopping him from running), and Mike Hilton playing a middle zone up close to the line.

Minkah Fitzpatrick can take away any routes to the middle, and he can jump routes knowing that he has help behind him. The problem using him in that role on most downs is the offense is going to see Terrell Edmunds deep and only have to deal with a 4-man rush.

This is why so many Steeler fans wanted a free safety to be drafted by the Steelers. This is why I was so excited by Sean Davis’s return to the team. Because with another safety who is actually pretty good in that cover-1 deep zone, Minkah Fitzpatrick could leave that deep zone role he is so often tied to and move around more and attack freely.

With all the tweaks to this defense we have seen, Sean Davis playing free safety isn’t one, in fact he hasn’t seen the field on defense at all. Instead Mike Hilton is learning to play both strong and free safety.

I was hopeful the Steelers would use more three safety sets this season, envisioning Sean Davis, Minkah Fitzpatrick and Terrell Edmunds being able to play interchangeably and change the entire dynamic of the defense on the fly depending on who played where. It doesn’t appear that Sean Davis will be involved in that, but the Steelers may still pull it off if Mike Hilton can add free safety to his list of roles he can play at a high level.

We are seeing the growing pains the defense is going through as it tries to evolve, hopefully in the future we will see fewer mistakes and more payoff.