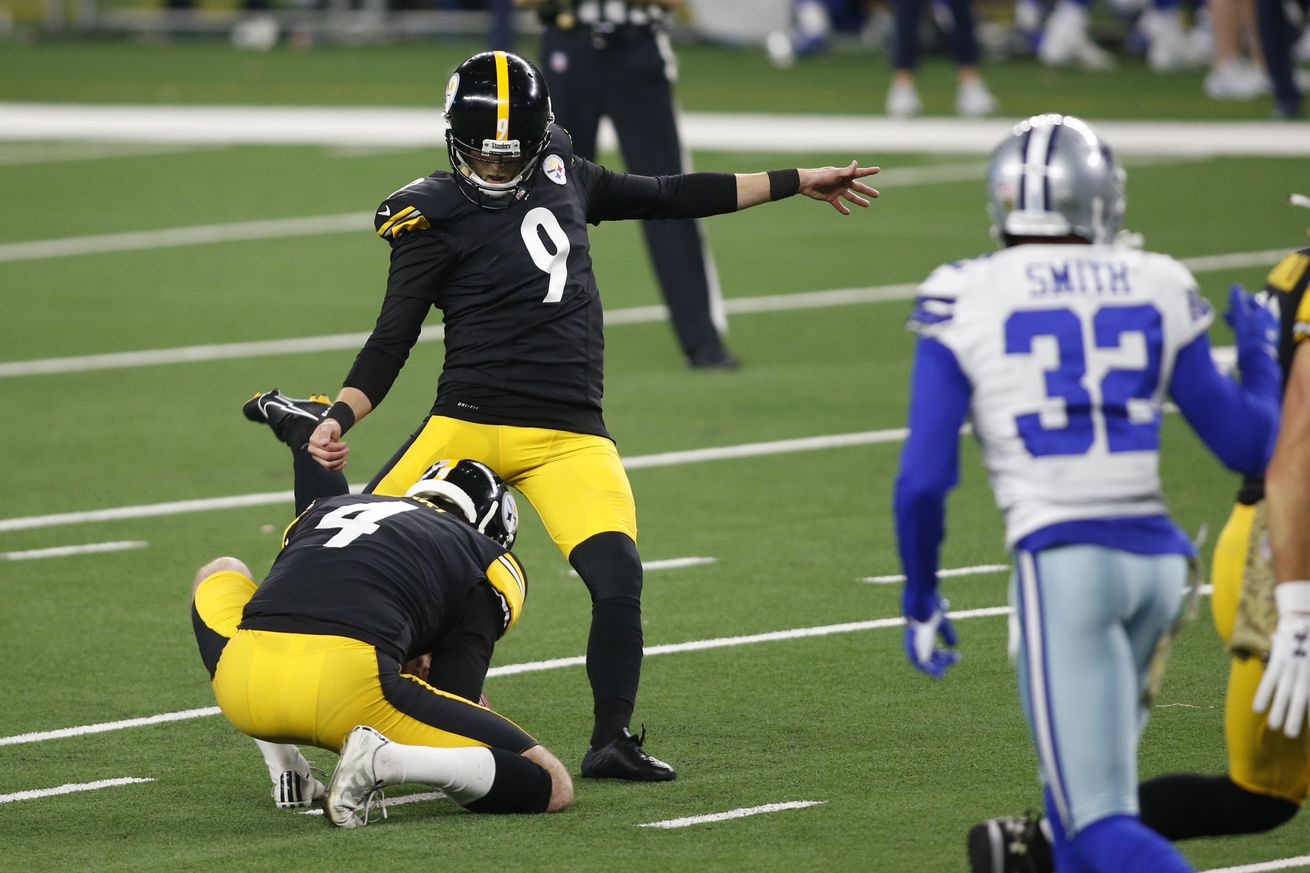 The special teams day for the Steelers reads like a soap opera script.

A missed extra point, a blocked extra point, two long returns and passing on a short field goal add up to a bad special teams day for the Pittsburgh Steelers, and those plays helped keep the Dallas Cowboys in the game, while a false start penalty on a missed field goal led to a franchise record 59 yard field goal from kicker Chris Boswell.

With so many interesting and crazy plays to cover, let’s jump into the film.

The Steelers have been a pretty good punt coverage team this season, and it showed for most of Week 9.

The Steelers on the right side of the screen do a great job shutting down anything to that side, James Pierre (#42) holds down his side to screen left, and gets the tackle as Jordan Dangerfield (#37) closes in. Notice the role Robert Spillane (#41) and Sean Davis (#21) are playing as well on this play, reading the play and going to where the defense looks the weakest. This is good coverage.

Week 9, 1st quarter, 1:55. Dallas gives a punt block look and the Steelers call the gunners in to help block. Chase Claypool (#11) is the Steeler farthest to the left.

Chase Claypool, James Pierre and Justin Layne (#31) do a great job sealing the outside lanes, so on Dallas’s second punt of the game, they ran a punt block look to pull the gunners inside. Sean Davis and Benny Snell do a good job taking over the outside responsibility, Chase Claypool dominates a linebacker to get downfield quickly and Jayrone Elliott (#45) mops up the play for another short return.

The Steelers were shutting down the Cowboys punt returns, until this happened:

The Cowboys trickery works, and it takes a great effort from Jordan Dangerfield to save a touchdown. A penalty for the push that put Dangerfield on the ground brings it back another 15 yards and the Steelers would get out of a tough spot thanks to a Minkah Fitzpatrick interception.

Due to the length of the play I had to cut it in half, here’s the first half of the play, watch the Cowboy to the top of the screen.

The Cowboy player pulls up a bit, like he’s hurt, and then jogs downfield, away from the Steelers, and it gives him a ton of open field to turn into a big return, the first punt return of his career.

That’s C.J. Godwin, who you may remember from 2014, when Mel Blount told he Steelers to check him out. The Steelers signed him, and put him on the practice squad for that season. Godwin took that foot in the door and has turned it into a 7 year NFL career and $3.5 million in career earnings, primarily as a special teams player. It wasn’t the only play he would make in the game.

Godwin beats James Pierre and makes the tackle on Ray-Ray McCloud. A nice couple of plays in his first, and in all likelihood, only game he will play against the Steelers. A nice story made more palatable for Steeler fans by the final score. A salute to C.J. Godwin, he has scraped together an NFL career and had a career game against the Steelers. To think it all started with Godwin cutting the grass at the Mel Blount home for youth.

The Steelers are top ten in the NFL in kickoff return yardage allowed, even after this past week.

Here’s the players on the following kickoff coverage plays. Note Antoine Brooks Jr. getting his first snaps of the season.

Antoine Brooks Jr. is impressive here, going right up the numbers, drawing a double team and holding his own to stay in the return lane. Henry Mondeaux also draws a double team, while Alex Highsmith against a single blocker helps Brooks Jr. seal off the return and keep it short of the 25 yard line.

Later in the game it wouldn’t go that well.

Week 9, 4th quarter, 14:51. the same alignment, mirrored due to the change in sides at the end of the quarter. (James Pierre is to the far right, Antoine Brooks Jr. third from the right, etc.)

A series of happenings create this return, all of them in the short span after the returner catches the kick.

Let’s start with James Pierre (far right), Pierre gets caught with a great block from a tight end. You can see he tries to get free of the block and get to his left, but he is stoned and sealed outside and has to chase the play down from behind. 2nd from the right is Justin Layne, and he makes the biggest mistake. watch the returner head inside, but keep facing upfield, he’s setting Layne up, and Layne bites, giving up his lane to cross the face of the lead blocker, gambling on a return to screen left. If you look to that side, though, you see Antoine Brooks Jr., Benny Snell and Jordan Dangerfield have any return to the left covered. Layne needed to keep integrity to his side. But one mistake doesn’t make a big play. Adeniyi stumbles, and both Alex Highsmith and Henry Mondeaux are double teamed and held (although not really bad enough to get called very often). It all adds up to an open lane with no support, and a big return.

This is a fluky play, and the parts that need fixed, notably Layne’s gamble will be pretty easy to correct with it being so glaringly obvious on film. I was worried it was due to guys like Mondeaux and Brooks Jr. playing, but they were solid on special teams all day, which is good news going forward.

Chris Boswell missed the Steelers first extra point try, and it was just a miss, nothing really to see on film, he just missed it. At the end of the half he’d miss another kick.

You can see #98 Tyrone Crawford trying to shoot that gap next to the long snapper, and while he does get his hand on Kameron Canaday, it’s more incidental on this play. The thing that stands out is Cameron Heyward’s false start. Seriously. Cameron Heyward was called for a false start on this play. No one moves. No one. Doesn’t make sense, but it leads to this:

Five yards farther back, a more egregious push-off and a franchise record kick that never should have happened.

#90 lays on Kevin Dotson, keeping him from coming up and disrupting Crawford, and Crawford puts his hands on both Dotson and Canaday, pushing off to jump (both feet leave the ground and go over the blockers as they put their shoulders together) through the gap and block the kick.

Here it is in slow motion.

And here’s the respective section of the NFL rulebook:

Sure looked like putting hands on an opponent in an attempt to jump through a gap to block an opponent’s kick.

There would be reason to be sore about this, except for that phantom false start penalty that led to three points, meaning the Steelers were +2 points on bad calls involving kicks on the day.

You can see why the Steelers didn’t kick a field goal on their last drive, the Dallas Cowboys were illegally jumping gaps to block kicks, and the refs were not going to call it. Canaday and Dotson couldn’t’ defend it even when they put their shoulders together, because Dotson was being held down the Dallas player was pushing off of them to get over their blocks.

Overall a crazy day for special teams with a great story for C.J. Godwin, a bizarre refusal to uphold a rule made to protect players from injury, a phantom false start that led to three points and a franchise record kick for the Steelers, and a cross-field lateral on a punt that the Steelers managed to prevent from turning into a touchdown.

Seriously, what a game.