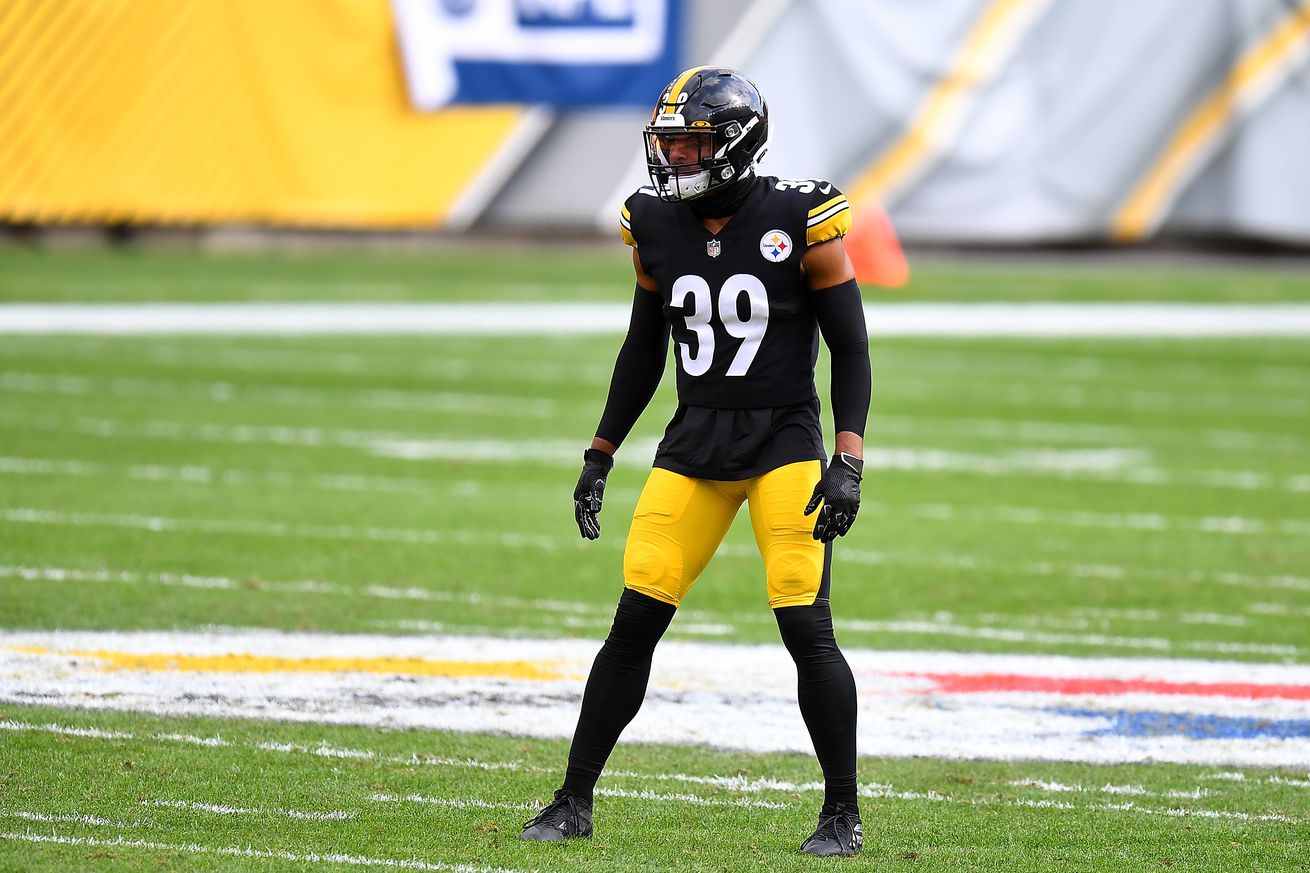 The Steelers star safety hasn’t been noticeable this year, but why?

The Pittsburgh Steelers defense is a top 5 unit in the NFL right now, but they aren’t the same defense that was a top 5 defense in 2019. One of the biggest changes has been the defense against deep passes. The Steelers were the best defense in the NFL in 2019 at defending deep passes, in 2020 they are mediocre.

This coincides with Minkah Fitzpatrick having a very tame stat line with no interceptions or passes defended so far this season. A top playmaker for the 2019 season, he hasn’t shown up in the stat sheets or the highlights in 2020.

Let’s look at why.

Week 5, 1st quarter, 13:53. Minkah Fitzpatrick is the deep safety, by the hash marks to the top of the screen.

The Steelers are using an awful lot of single high safety looks this season as they focus more personnel on blitzes. Minkah Fitzpatrick on this play shows where his strengths lie in single high safety. He reads the quarterback and the play and his movement takes away any attack on the middle of the field here, and Carson Wentz ends up scrambling and getting sacked by T.J. Watt.

We’ve covered this before, but the Philadelphia Eagles used these concepts a good amount. There are only two real routes being run here, and those routes are designed to beat a single deep safety. The corners are both funneling their receivers toward the deep help, but the routes have different levels to them and Fitzpatrick can’t be the inside help for both routes. As soon as he steps up to help Joe Haden, Wentz throws deep, and fortunately the Eagles don’t connect on this one.

They run it again later, and this time Fitzpatrick takes away the deep route and the Steelers give up a first down. Running a max protect with this two layer attack on the deep safety is a great counter to cover-1 blitzes. The defense can counter it by taking a rusher and using them in an underneath zone as a robber. It takes a player off of the blitz, but it allows the defense to provide inside help on both levels. The Steelers do use robbers occasionally, but so far they have preferred the extra blitzer to increased security in the secondary.

It should be noticed that on both of these plays Minkah provided help to Joe Haden, and it was Steven Nelson that was left without help. This is a common theme this season, and a big reason why advanced stats say Joe Haden is playing terrific while Steven Nelson is struggling.

On this play the Steelers are working on some new-ish tweaks to the defense, and it leaves a tight end wide open. Fitzpatrick crashes down to tackle the catch, and we get another example of how mix ups by linebackers can make the free safety look bad, especially when advanced stats count this reception and yards against Minkah Fitzpatrick. This defense will get coverage in my next film room, but if you look at the LBs in the middle of the field you can likely get an idea of what went wrong.

Enough single high, how does Fitzpatrick do when he’s in a defense that fits his skill set better.

Week 5, 2nd quarter, 10:29. Minkah Fitzpatrick is the safety to the bottom of the screen.

Terrell Edmunds is the deepest safety on this play, and Fitzpatrick crashes the routes on his side. Carson Wentz sees Fitzpatrick some up and throws as far outside as he can. The Eagles completed a good number of these far outside throws in week 5, but it is always good defense to force a long throw to the sideline that would gain about 8 yards if caught.

Week 5, 2nd quarter, 0:22. Minkah Fitzpatrick is the deep safety to the bottom of the screen.

And now we get to the key part of this film room. Here Minkah Fitzpatrick gives up a long throw with Joe Haden in coverage because he wandered off to help Steven Nelson, right?

Take a look at Carson Wentz on this play.

When Wentz escapes the pocket to his left, Fitzpatrick follows him. you can see as Wentz is throwing that Fitzpatrick is just a bit inside of Wentz, 30 yards downfield. Fitzpatrick gives Wentz that deep ball, because he has to make that throw from an awful spot, throwing deep to his arm side while moving the opposite way and he can’t set his feet or square up to the throw properly. That’s a nearly 60 yard throw into a small window and Wentz nearly makes it despite the difficulties he is facing as he attempts the throw.

Fitzpatrick made the right decision here, take away the easier throws, make the quarterback throw a really difficult pass.

Carson Wentz made a lot of really difficult passes in week 5. He completed throw after throw to the sideline, he put deep balls in pretty good locations without being able to set his feet and throw properly, and in general looked a lot more like the MVP candidate who excelled against the blitz than he did the Carson Wentz we’ve seen since Nick Foles won the Super Bowl.

That play reminded me a lot of a play from week 1.

Devin Bush is manned up on Saquon Barkley on this play. He has no chance of defending Barkley, as he is expecting a run. Minkah Fitzpatrick reads the play and takes away Saquon Barkley, leading Daniel Jones to try and throw the ball to Sterling Shepard. Bud Dupree hits his arm and the Steelers turn the momentum of the game back in their favor.

Now compare that to a play from week 5.

On this play the Eagles motion Zach Ertz from a wingback alignment across the formation into the flat. Terrell Edmunds is manned up on Ertz, and the Eagles have their slot receiver to the top of the screen run an in route pick to free up Ertz. Terrell Edmunds, like Bush is out of the play. Minkah Fitzpatrick reads the play and goes for Ertz, only to run into the pick himself. But Ertz isn’t open, because Joe Haden switches and covers that flat, and T.J. Watt also reads the play and gets in the passing lane. A pass to Ertz isn’t going to work.

But while Haden and Watt shut down Ertz, no one drops into the middle zone to cover Haden’s man. Terrell Edmunds and Minkah Fitzpatrick both are looking at Ertz, and the ball goes right where Fitzpatrick should have been. Fitzpatrick left his zone to cover a man that would be picked up by other players, and Edmunds didn’t swap with Fitzpatrick. That’s a scheme bust and a miscommunication all rolled into one bad play.

Teams have figured out Minkah Fitzpatrick’s tendency to read plays and jump the route they are freeing up, and at times they are able to exploit it. It’s a similar problem the Steelers faced when they had Troy Polamalu at strong safety. Sometimes when they adlib to shut down something they see, they leave something else open.

I wanted to throw this in at the end, because while teams occasionally take advantage of Minkah Fitzpatrick’s aggression to the flats, it not only forces bad throws like the Daniel Jones interception, Fitzpatrick also is a fantastic defender on outside runs because of it. You can see Fitzpatrick running, but not full speed, as he stays just behind Miles Sanders. Sanders can outrun Vince Williams to the sideline, but when he commits to that Minkah Fitzpatrick will run him down. When Sanders cuts back, Fitzpatrick is still in position to help on the tackle.

If you envision a role that might suit Minkah Fitzpatrick’s skill set better, and allow the team to better cover his gambles, I will understand if strong safety, dime linebacker or slot corner are the names you come up with. In my next film room I’m going to talk more about what the Steelers want from their defensive backs, and why it is working well, but maybe not as well as they planned.

But for this film room I wanted to show that Minkah Fitzpatrick is still playing good football, He’s making smart reads and shutting down what he should shut down. Right now he isn’t getting the chance to make plays, he’s often covering for the Steelers who are getting those chances, namely the pass rush, but also, teams have learned his tendencies and are able to avoid him more often.