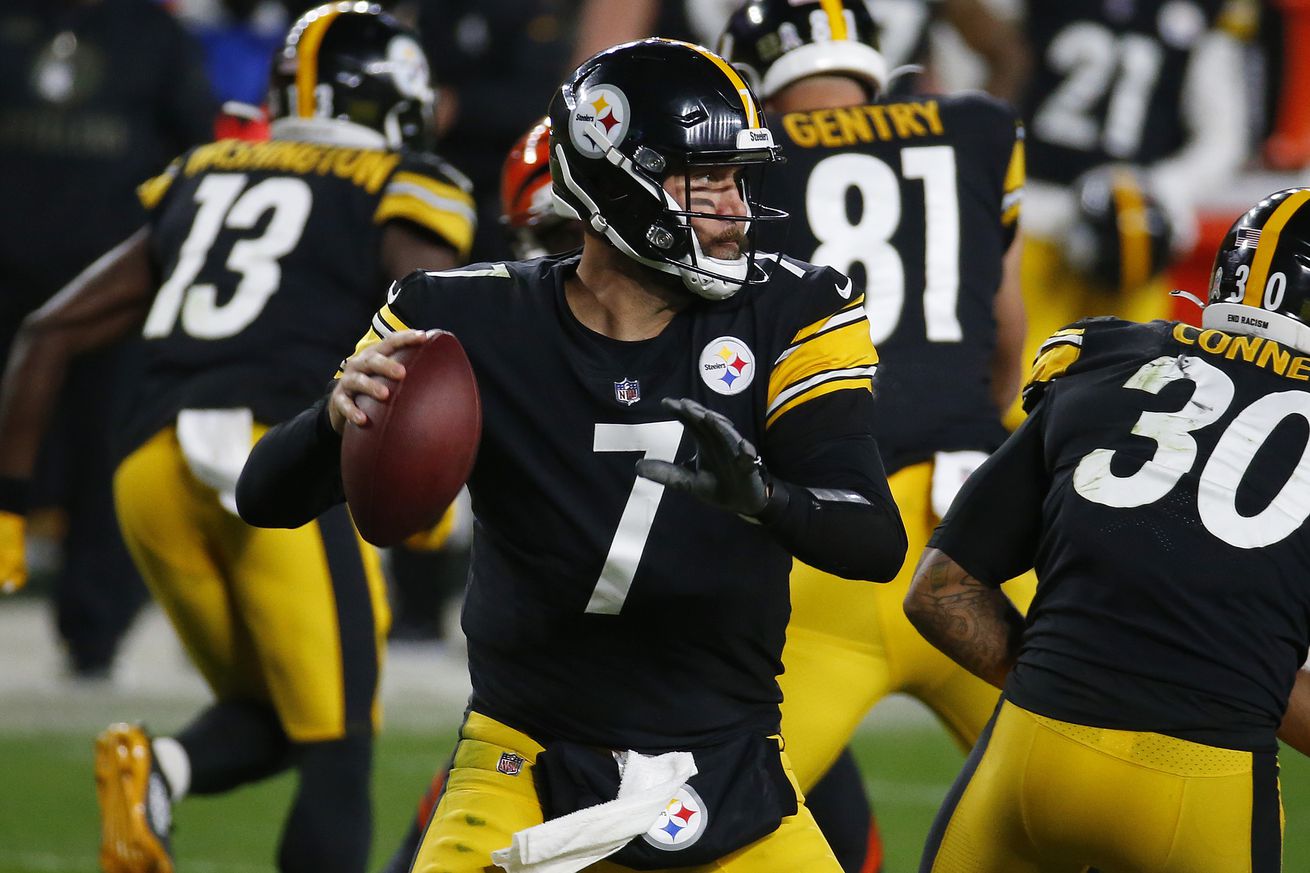 Pittsburgh Steelers dominate Joe Burrow and the Cincinnati Bengals to advance their record to 9-0 on the season.

The Pittsburgh Steelers entered Week 10 with a perfect 8-0 record, and they would face off against the 2-5-1 Cincinnati Bengals for the first time in the 2020 regular season. The Bengals had two weeks to get rookie quarterback Joe Burrow ready for his first meeting with the Steelers, but he would have to wait for his first opportunity with the Bengals winning the toss and choosing to defer their possession to the second half.

After just one first down on their opening possession, Jordan Berry punted the ball away to Jordan Erickson. Erickson made a move and before he was down Ola Adeniyi punched the ball out, which was recovered by Benny Snell Jr. for the first turnover of the game.

With the ball on the Cincinnati 32 yard line, Ben Roethlisberger and company could not even muster a first down, forcing Chris Boswell for his first attempt of the game. His 41-yard field goal was good, giving the Steelers an early 3-0 lead with 11:23 left in the opening quarter.

Joe Burrow and company couldn’t muster a first down after a false start on their first play from scrimmage, and just like that it was the Steelers with the football again. The Steelers’ third possession was more of the same with another Berry punt.

Another three-and-out for the Bengals gave the Steelers their best field position of the day not coming off a turnover, and after a reverse to Chase Claypool on first down the Steelers found themselves on the cusp of the red-zone. However, another drive stalled and Boswell was forced to kick a 30 yard field goal to give the Steelers a 6-0 lead with 4:53 left in the first quarter.

Joe Burrow continued to struggle, and it resulted in another three and out. Needing an injection of offense, Ben Roethlisberger connected with Diontae Johnson for a 42-yard completion, and followed it up with strike to Johnson over the middle for the Steelers touchdown.

The Steelers went for a 2-point conversion to go up 14-0, but failed when a pass intended for Chase Claypool fell incomplete. The result was a 12-0 lead with 1:51 left to play in the first quarter.

The Bengals’ offense was able to move the ball on their next possession, but it ended in a similar fashion when a pass intended for Tee Higgins was ripped out of his hands by Cam Sutton and recovered by Steven Nelson. It was the Steelers’ second turnover of the quarter, but resulted in just another Jordan Berry punt.

Cincinnati’s offense finally woke up with Burrow delivering a huge 54-yard strike to Tee Higgins to get the ball into the red-zone for the first time in the game. Just a few plays later it was Burrow who hit Higgins again on 4th and goal to cut into the Steelers’ lead, 12-7 with 10:37 left in the first half.

The first time the Bengals cracked the Steelers’ defensive code, it was the offense’s turn to answer. They did just that with Ben Roethlisberger orchestrating a drive which featured key third down receptions to Chase Claypool, and none larger than a touchdown pass to JuJu Smith-Schuster.

Chris Boswell’s point after was good, making the score 19-7 with 7:23 left in the first half.

Burrow and the Bengals’ offense went right back to their three-and-out ways on their next drive, giving the ball back to Roethlisberger and company with just over four minutes remaining in the first half. Completions to Dionate Johnson and Eric Ebron moved the offense into field goal range, and that is where they would stop. Chris Boswell made his third field goal of the half to make the score 22-7 with 1:48 left in the second quarter.

Cincinnati was unable to put up any points on the ensuing possession, and the score would hold heading into halftime.

The Bengals received the football to start the second half, but the start of the quarterback featured more punts than big plays by both teams. Ben Roethlisberger’s second possession of the half was one of the best of the day. Roethlisbeger was masterful on third downs, with completions to JuJu Smith-Schuster and Chase Claypool, and once reaching the red-zone it was a pass to Chase Claypool for the touchdown.

Threw it where only @ChaseClaypool could get it

Chris Boswell tacked on the extra point to make the score 29-7 with 4:19 left in the third quarter.

After both teams exchanged several possessions with no one drawing blood, a Ray-Ray McCloud punt return set up the Steelers’ offense inside the red-zone. It took just three plays before Roethlisberger hit Claypool on an inside slant for his fourth touchdown of the game.

Chris Boswell was good again to make the score 36-7 with 10:31 left in regulation.

When it looked like the Steelers defense put the locks on the Bengals, a fake punt gave them new life and moved them well into Pittsburgh territory. However, the drive wouldn’t move much further and Randy Bullock was called on to kick a field goal, making the score 36-10 with 5:05 left in the fourth quarter.

Mason Rudolph came in for Roethlisberger in mop up duty, and did nothing but hand the ball off to Benny Snell Jr. After another Berry punt, Burrow and company took over just to run out the clock. The final score would finish 36-10 in favor of the home Steelers.

The Steelers’ win keeps their record a perfect 9-0 as they now turn their attention away from the Bengals and onto their Week 11 opponent in the Jaguars in Jacksonville. Stay tuned to BTSC for the latest news and notes surrounding the black and gold as they continue to roll through the regular season.