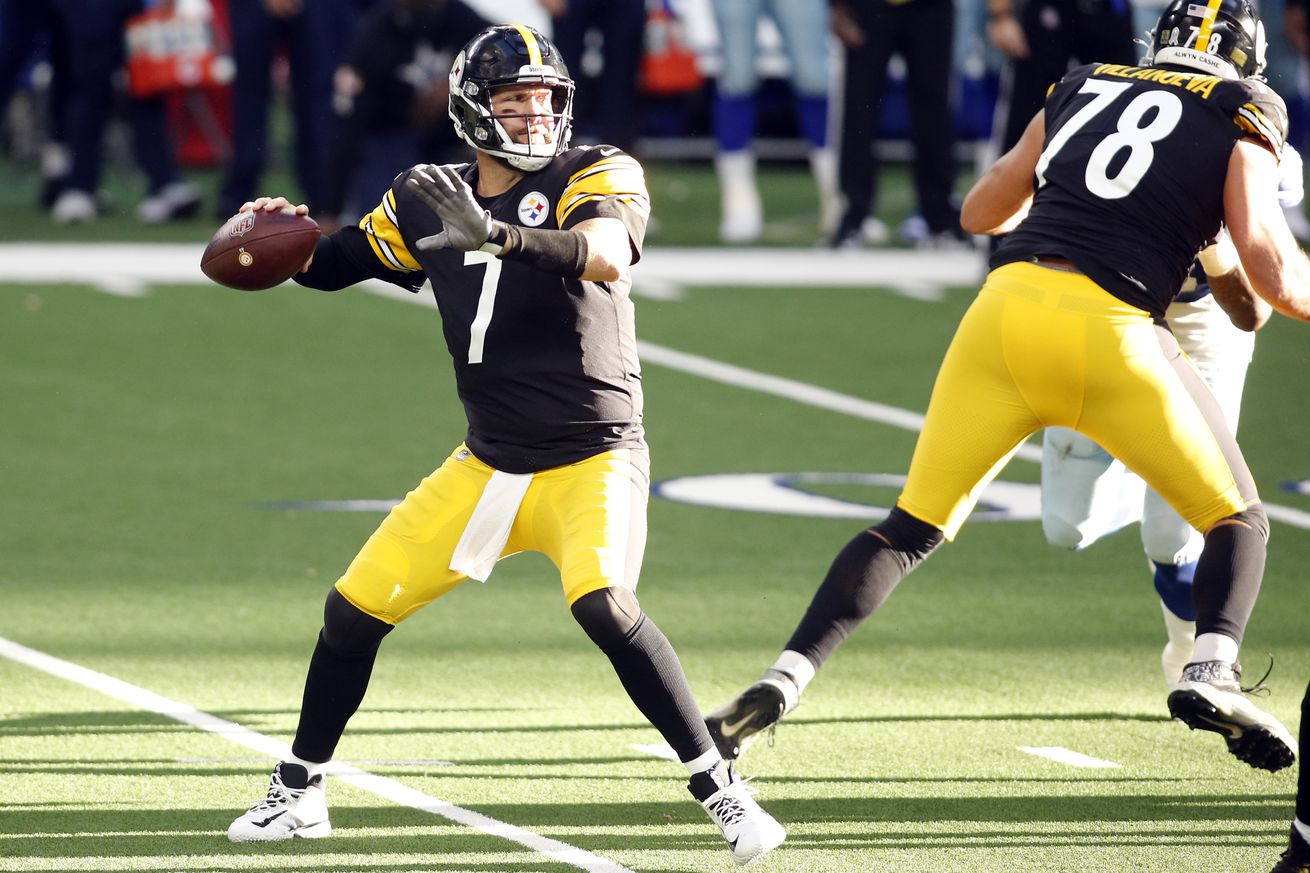 The Pittsburgh Steelers were able to overcome early season struggles as they remained a perfect 8-0 by beating the Cowboys in Week 9.

The Pittsburgh Steelers came into the Week 9 showdown with the Dallas Cowboys with a perfect 7-0 record. On paper, it seemed as if the 2-6 Cowboys wouldn’t be much of a match for the last undefeated team in the NFL.

But that is why they play the games, and the Steelers lost the opening coin toss and put the offense on the field to start the game.

Ben Roethlisberger and the offense were able to move the ball near midfield thanks to two third down conversions, but a deep pass intended for Chase Claypool, which looked to draw interference, was dropped and the Steelers were forced to punt the ball to Dallas.

Garrett Gilbert and the Cowboys’ offense took over on their own 15 yard line, and it was Gilbert who delivered the first big play of the game via a 32-yard pass to Amari Cooper down the sideline. Pittsburgh’s run defense suffered a big run which put Dallas in the red zone, but the drive stalled and Greg Zuerlein was called upon to give the Cowboys an early 3-0 lead.

The third Steelers offensive possession was their best of the game, but when they faced a 4th and short they chose to not go with a 53-yard Chris Boswell field goal, and instead ran it with Benny Snell Jr. Snell was stopped short of the yards to gain, giving the ball to Dallas on downs.

Garrett Gilbert used his legs on the next drive to move the ball quickly into Pittsburgh territory with two quarterback scrambles. Gilbert then used his arm with a beautiful pass to CeeDee Lamb for the Cowboys touchdown. Zuerlein hit the extra point to make it 10-0 with 7:45 left in the first half.

Ben Roethlisberger and the Pittsburgh offense continued to sleep walk through the first half, and another three and out gave the ball right back to the red-hot Dallas offense. After another Jordan Berry punt, the Cowboys used some special teams magic to get the ball deep into Pittsburgh territory on a pass back return. However, the Steelers’ defense held them to another Zuerlein field goal, making the score 13-0 with 3:46 left in the first half.

Desperately needing a response, Ben Roethlisberger went to the air to make it happen. Big completions to JuJu Smith-Schuster, Diontae Johnson and Eric Ebron moved the Pittsburgh offense into Dallas territory yet again. However, on a second down throw Roethlisberger was hit low and was visibly favoring his left knee. He didn’t leave the game, and capped off the drive with a touchdown pass to James Washington.

Chris Boswell missed the point after to make the score 13-6 with 1:10 left in the first half.

Things changed quickly when on the second play on Dallas’ next drive a pass completed to Lamb was stripped by Cam Sutton and went into the hands of Minkah Fitzpatrick. With Roethlisberger still in the locker room, Boswell was called on for a 59-yard field goal which was good.

After halftime the Cowboys received the football to start the third quarter, and it was Garrett Gilbert who continued to move the ball efficiently against the stout Steelers defense. The first drive of the second half was filled with key plays, and big runs, which ended with another Greg Zuerlein field goal to extend the Dallas lead 16-9.

With Ben Roethlisberger back on the field, the Steelers couldn’t must a first down on their first possession of the second half before Jordan Berry had to punt the ball back to Dallas. Gilbert continued to move the ball with ease against the Pittsburgh defense, but another drive ended in a Zuerlein field goal to make the score 19-9 with 2:15 left in the quarter.

Roethlisberger’s next opportunity was possibly his best as he found JuJu Smith-Schuster early and often to move the ball into Dallas territory. The Roethlisberger to Smith-Schuster connection remained red-hot as the Steelers’ quarterback his his favorite receiver for Pittsburgh’s second touchdown of the game.

Boswell’s point after was blocked, and made the score 19-15 with 14:50 left in regulation.

Due to a personal foul penalty, the Steelers were able to kick off near midfield. The pooch kick was perfect, but the coverage was less than ideal. The huge return was just the latest blunder for the Steelers special teams, and gave a quick injection of life into the Dallas offense.

Gilbert and the offense continued to have positive plays move them into the red-zone, but on third down Gilbert was pressured and his as he threw. The ball was intercepted by Minkah Fitzpatrick, giving the Steelers new life.

Pinned back in their own end, a huge 3rd down conversion to Chase Claypool gave the Steelers a new set of downs and some breathing room. The drive saw conversions to Chase Claypool, and also aided by a personal foul penalty against Leighton Vander Esch of Dallas. However, the drive stalled and Pittsburgh settled for a Boswell field goal. The kick made the score 19-18 with 7:11 left in the fourth quarter.

The Pittsburgh defense hadn’t made too many stops throughout the game, but they did on the next Dallas driving, giving the ball back to the offense with 4:11 on the clock and trailing by just one point.

What looked like a quick three and out changed quickly when a roughing the passer penalty was called on Dallas, extending the drive and giving Ben Roethlisberger new life. They didn’t waste the extra opportunity and a beautiful catch and run by Diontae Johnson set up the offense in the red-zone. Two plays later Roethlisberger hit Eric Ebron for the Steelers touchdown. Pittsburgh elected to go for two, to make it a 7-point lead, but the pass intended for Claypool fell incomplete, making the score 24-19 with 2:14 left in regulation.

Needing a touchdown to win the game, Gilbert was able to hit a quick pass to Amari Cooper on first down, but it was the last completion he would make. On 4th and 8 it was Cam Heyward who busted through the line and sacked Gilbert, giving the ball back to the offense and securing the Pittsburgh perfect record.

The Steelers ran four straight times, giving the ball back to Dallas, and although Gilbert moved the offense into scoring range, it didn’t amount to the touchdown they needed to win the game.

The win moves the Steelers’ record to 8-0 on the season as they prepare for the Cincinnati Bengals in Week 10 at Heinz Field. Stay tuned to BTSC for the latest news and notes surrounding the black and gold heading into that big AFC North game.