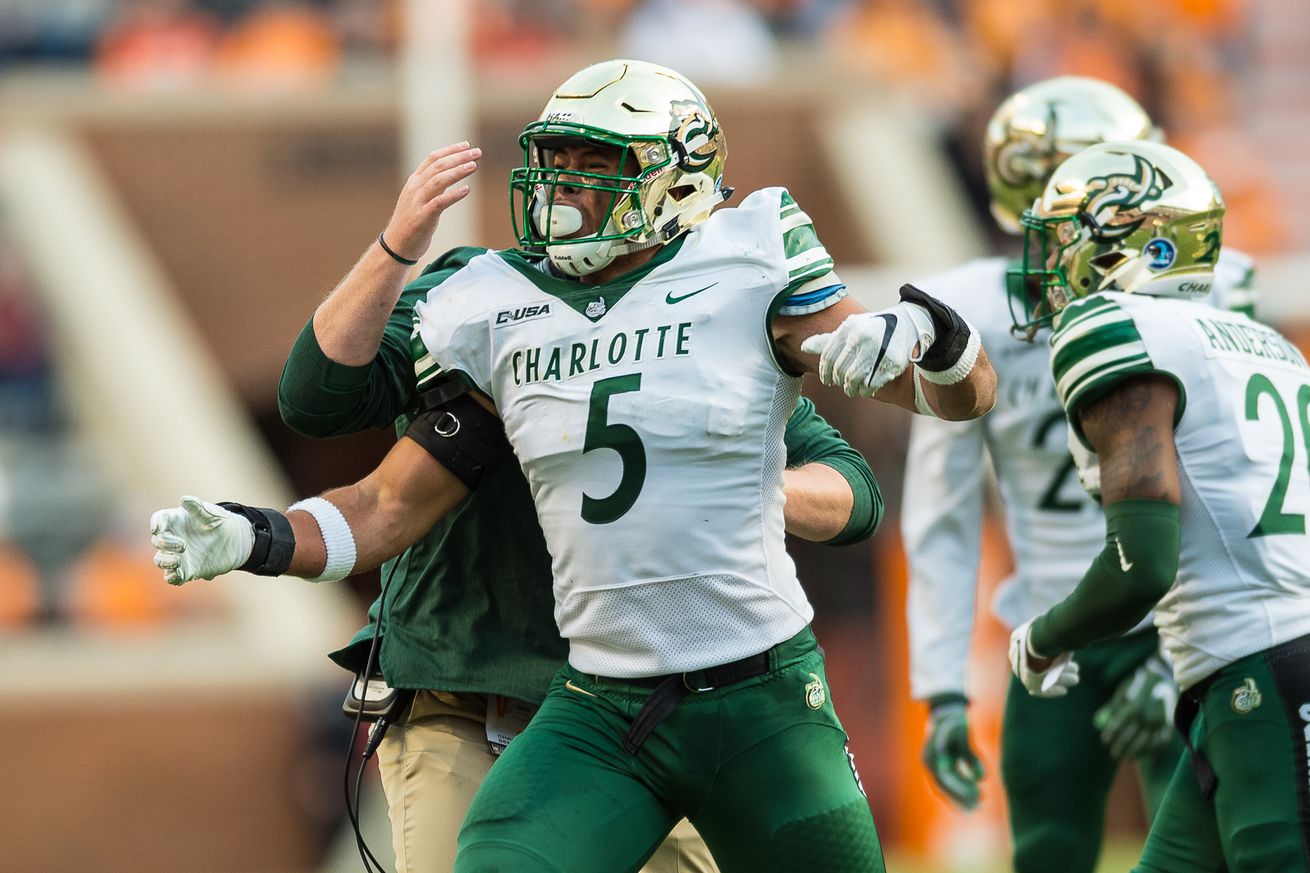 If Alex Highsmith can live up to the picture headlining this article, look out, world!

Since the Steelers selected him out of Charlotte in the third round of the 2020 NFL Draft, outside linebacker Alex Highsmith has already liked one of my articles about him and had another shared on Facebook with someone named Sam Highsmith.

I don’t know who Sam Highsmith is, but I assume he’s a relative to Alex—perhaps his father, brother, uncle or cousin. Anyway, Sam, the photo of Alex that headlines this article, well, it’s pretty badass. I’ve always thought so. I’ve seen it a zillion times since your son/brother/nephew/cousin was drafted by the Steelers back in April. I never looked at it closely, but I always assumed it was of him badly beating a pass-blocker on the way to demolishing another college quarterback.

I was wrong (see what I get for assuming things)? Turns out, the picture is of a celebration Alex was having with his coach and teammates after a huge play against Tennessee in November of 2018.

But, seriously, isn’t that picture badass, Sam? Doesn’t it look like he just whipped an offensive lineman? If you were Alex’s agent, wouldn’t you use that picture when trying to negotiate a deal for a new contract and/or to star in whatever superhero movie they’ll be making around the time he becomes a badass pass-rusher in the NFL?

Can you imagine Alex Highsmith proving the doubters wrong and going on to have a stellar career in Pittsburgh? If you’re his father, brother, uncle or cousin, you already are imagining it.

I think it can happen. I think Alex can really do it, Sam. I think he has the potential to replace Bud Dupree and be the Chad Brown that the Steelers let get away because it was the 1990s, they didn’t like to sign their own free agents much and, besides, Greg Lloyd was already under contract. Unfortunately, Lloyd suffered an ankle injury in 1997, an injury that was further compromised by a staph infection, and was done in Pittsburgh after that. I don’t expect you to know that, Sam. I only know that because I’m an old nerd who remembers just about everything that’s happened with the Steelers since 1980.

I’ve seen it all, Sam, and I don’t see the Steelers making the same mistake twice, not today, not when they try and make deals with every single one of their free agents and are always so cap compromised.

Are you a capologist, Sam? If you are, maybe you can try to figure out a way for the Steelers to sign both T.J. Watt and Dupree to lucrative, long-term deals.

Wait a minute, why would you want to do that? You want what’s best for your son/brother/nephew/cousin.

Don’t worry, Sam. Alex is going to get paid one day. That picture from his days in Charlotte is, again, really, really badass. Do you know how to do photoshop, Sam? Maybe you don’t, but maybe someone else reading this does. If you do, can you take the picture that headlines this article and put Highsmith in a number 56 Steelers jersey? And can you make it look like he just demolished some All-Pro tackle? And can you paint in a picture of Tom Brady looking really scared?

Back to you, Sam. Your son/brother/nephew/cousin (sorry for not doing the family research) is going places.

That picture, the one up above, it speaks to me.

Alex Highsmith is going to be something special.