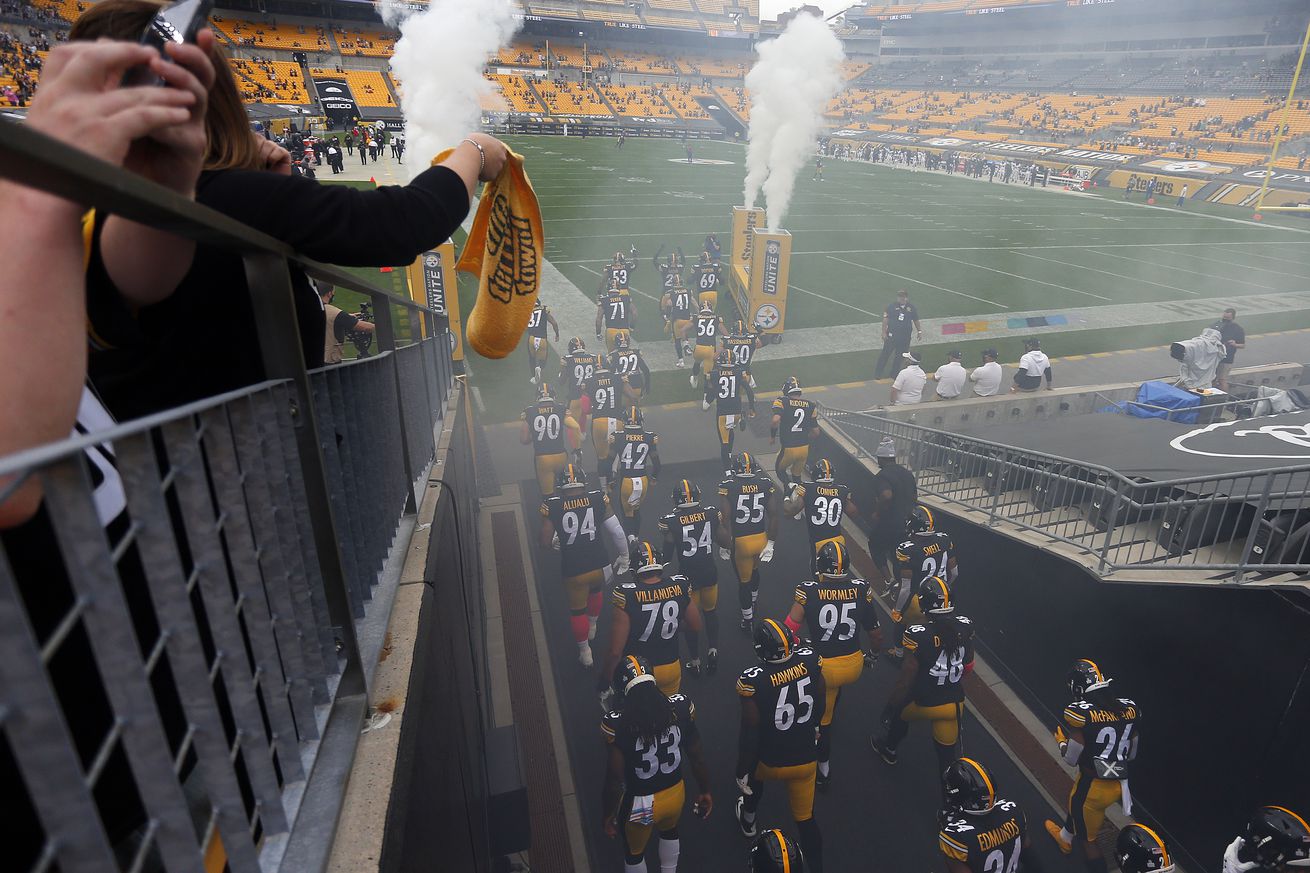 The other day I landed on an NFL stats page that noted that T.J. Watt and Vince Williams are currently ranked first and second in the entire league in Tackles for Loss, despite having played one fewer game than most of their competitors. (They’re up by quite a bit too – Watt has nine, Williams has eight, and no one else has more than six.)

Well, sometimes that’s all it takes. Suddenly I was three miles down the rabbit hole, sorting and resorting stats at the 2020 season’s quarter-pole (at least for the Steelers). Raw numbers often don’t mean much to me mid-season – I really don’t know what an impressive number of completions looks like for a four game stretch – but conference and league rankings make sense. So I collected some, many of which were quite surprising.

Below are some highlights of what I found. I tried to use percentages or “per game” versions instead of raw numbers, to account for the fact that not every team has played five games. I also didn’t bother noting where the Steelers were tied with another club at a certain number, but that happened sometimes.

This won’t necessarily add up to a single conclusion (at least not one I can extrapolate), but it’s an interesting snapshot of how ferociously the Steelers are tearing up the league in some categories, and how clumsily they’re stumbling along on in others. Enjoy.

A couple of things leap off the page. For one, Ben Roethlisberger is playing very careful football right now. He’s getting the ball out of his hands faster than anyone else in the league, even though he’s one of the least blitzed quarterbacks in football. It’s also not an illusion that he’s passing short — he’s playing nearly the shortest game in the NFL. Moreover, the Steelers are running less play action than anyone in the league, which is often a way to buy receivers time to get deep.

This strategy also seems to be working: Ben is one of the least touched quarterbacks in the game right now. His completion percentage would also be a career high if it were sustained over 16 games, as would his passer rating, and his percentage of touchdowns and interceptions are both top 5 in the NFL.

And that takes us to the gut-punch of the chart: according to Pro Football Reference, Roethlisberger is top tier for passes being on target, but his receivers are among the worst in football for drops. It’s also worth noting that PFR credited Chase Claypool and JuJu Smith-Schuster with zero drops between them, so the rest of the WR/TE/RB corps must be exceptionally inconsistent when it comes to simply making the catch. If Big Ben seems to trust Claypool more than a lot of his other receivers already, there might be a reason why.

So apparently rumors of the death of the Steelers defense were a bit exaggerated. This unit gave up a few too many plays to the Eagles, but they are still an absolutely elite defense — arguably the best in football, according to the numbers.

And they’re right in the middle of the pack in missed tackles, which sounds about right — and definitely needs to get resolved.

Look at all those 1’s. Goodness.

We knew the Steelers had a fercious pass rush (they’re on pace for a ridiculous 80 sacks this year). But there are definitely some numbers here I didn’t expect: completion percentage, opponent YAC, interception percentage, passer rating…

One area of perplexing failure, though, is in yards per completion, where the Steelers are dead last in the league. This is complicated. The Steelers allow one of the lowest completion percentages in football, and when opponents do get a reception, the Steelers give up the fewest yards after catch of anyone in the game (and, to the surprise of some I’m sure, only miss tackles at a moderate rate). Moreover, when quarterbacks hold the ball too long, allowing receivers to get deep, the Steelers are punishing them for it at an historic pace. So how are teams getting all these yards?

The only explanation for this is that Steeler opponents have found they can’t run, and they can’t play a short-passing game against this team. Screen passes, short crosses, and other plays designed to get the ball out quickly and get the receiver in space, aren’t working at all. The Steelers swarm, gang-tackle, and otherwise cover too tightly up close. So opponents just keep trying to throw deep. That’s why they’re getting pounded so much. It’s why they’re completing at such a low rate. And it’s why they’re getting such high yardage per reception: they don’t complete a ton of these, but they get enough to hurt (and turn too many into touchdowns as well).

This is just a hypothesis, but it bears watching as the season moves on.

When it comes to efficiency, the story takes an awkward turn. The Steelers are outstanding in time of possession and sustaining drives. (Side note: it’s a problem when your offense continually needs to convert on third down. But if you’re converting at a high rate, a lot of third downs means a lot longer and more demoralizing drives.) Meanwhile, the Steelers defense is among the league’s worst at getting off the field on third downs. Keep that in mind; it’s going to come up again later.

Another lesson we might learn at this point is that the Steelers’ terrific run defense and efficient, short passing game suggests a type of long-haul thinking. That is, when the opponent can’t run or pass short, they can’t control the clock. That 6:22 time of possession advantage is going to mean an awful lot as the season drags on and players start getting banged up.

So this is also confusing — the Steelers appear to be in the lower third of the league/conference at sustaining drives, and yet they lead the AFC in time of possession. How is that possible? Well, look at the defensive stats here. Opponents cannot sustain drives against this Steelers defense at all. No one creates 3-and-Outs like the Steelers D.

But what about all those third-down conversions from the previous graph? you might ask. Well, it turns out that the Eagles game was a real outlier for these guys (and with a four-game sample, one bad week can really throw off the averages). The Steelers defense’s 50% conversion rate was 42.8% before the Philly contest — which would have moved them from 14th in the AFC to 7th.

It also seems to me there’s a feast-or-famine quality to this defense. Remember the yards per completion stat from before? Opposing offenses seem to either move backward while going 3-and-out against the Steelers, or (at least last week) they covert on 3rd and 17. I want to believe that they’ll get back on track as the competition gets stronger (they tend to raise their game against the NFL’s elite teams), but we’ll see.

I also want to draw your attention to the penalty stats. The Steelers are middle of the pack in committing penalties, which is not a big surprise. But if you feel like their opponents are getting away with holds, late hits, interference, and other infractions — well, you might be onto something. The Steelers opponents are getting flagged at an improbably low rate. This is even more startling because of how supposedly poor those squads are. “Losers” aren’t typically disciplined squads, but against the Steelers, this “inferior” competition seems to play pretty clean.

It’s nice that fewer flags are flying this year (there’s nothing worse than a game decided in the referee huddle), but this certainly seems worth watching. And it undercuts the sour grapes claim you sometimes see, that the Steelers have the refs in their pockets. The numbers suggest otherwise.

Anyway, as expected, this doesn’t necessarily add up to a single conclusion. But maybe these trends will be worth watching this weekend and in the months that follow.