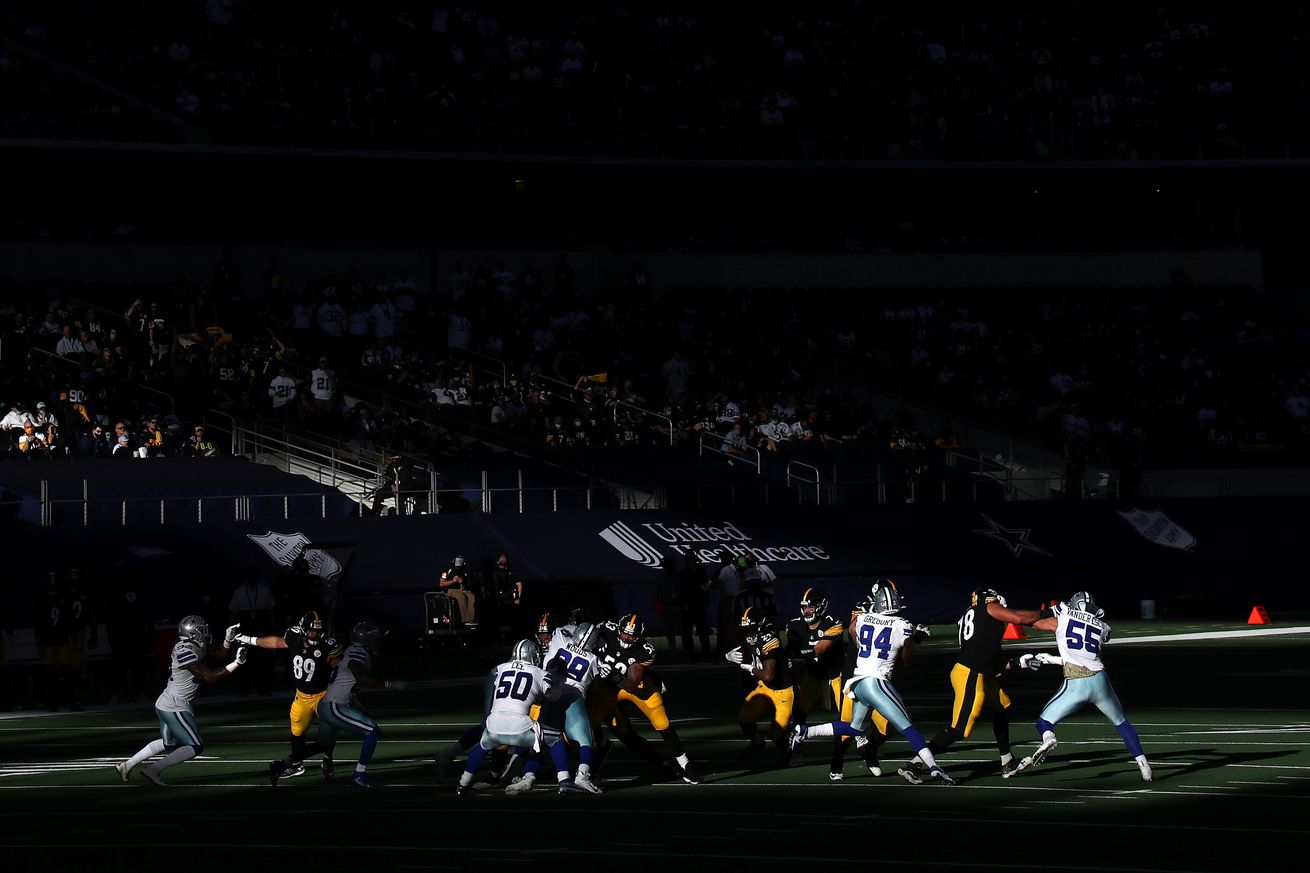 An educated guess at who will shine for the Black & Gold (or not) this in the second half of the season.

Now that every team has played it’s eighth game of 2020 (at least), the talking heads are weighing in on All Pro picks and award predictions. I read these articles compulsively (and with some irritation), but it’s occurred to me a couple of years ago that we rarely do that for just the Steelers.

So below is a series of polls to predict various “awards” specific to this Steelers team. I’ll make a case for who I’d choose as well, but when we did this last year, the polls proved to be the best part.

The article will come in two sections: Part 1 (this essay), will feature the more traditional awards (MVP, Rookie of the Year). Later will come Part 2, with more invented categories to argue about.

My goal is to start a few arguments in the comments section, and maybe help get Steelers Nation fired up and ready for the back-8. In any case, please make arguments, leave suggestions, and otherwise hash this out in the comments. On with the show. Go Steelers.

Here’s the short-hand version (with my picks). Explanations and polls to follow.

Whether it’s NFL MVP or Super Bowl MVP, league voters are often wildly inconsistent in how they define “most valuable.” For my part, I think of MVP as somewhere between “the team’s best player” and “the hardest to replace.” That is, the guy who, if you lost him you’d feel it the most; not just because his backups are bad, but because he brings something you can’t get anywhere else.

My Choice: T.J. Watt. I have a strong inclination to award MVP to Big Ben every year, since he’s always been the engine of this team. But Watt is almost certainly the best player on the Steelers at this point in his (and everyone else’s) careers. More importantly, Watt makes a difference on just about every play. He has a very good chance to take the NFL’s Defensive Player of the Year, probably should have won it last year, and he makes the players around him better.

Offensive Player of the Year

I think of OPOY (or DPOY) as the player having the finest season. Stats matter (especially on the offense) but so does the eyeball test. Which player is having/will have the most impressive 2020 season? Here are my candidates:

My Choice: Ben Roethlisberger. This is a wide-open field to me, and I could truly see any of the above names separating from the pack in the right circumstances. I’m running with Ben because he has been consistently strong this year. He’s playing point-guard more than field general, but we’ve seen some Backyard Ben the last couple of weeks, and he’s going to get his long-ball accuracy back eventually. Moreover, that spread-it-around method is working. Ben has always been the straw-that-stirs-the-drink. He’s the biggest difference this year from last year.

Defensive Player of the Year

Stats can affect DPOY, but with interior linemen eating up blockers and shutdown corners never being challenged, the eyeball test is at least as important. Who will be the most impressive defender in black and gold?

My Choice: Stephon Tuitt. Watt probably deserves this (and I guess I expect him to win the poll), but I’m trying to spread the adulation around. And honestly, Tuitt has quietly been a wrecking ball this year. He was deservedly Defensive Player of the Week after the Ravens game, but he’s been a force all year. Tuitt was recently ranked the 7th most disruptive defender in the league (Watt is #2, Dupree is #4), and has a knack for big moments, such as forcing the intentional grounding call against Ryan Tannehill that pushed the Titans out of field goal range. The Steelers front-seven is almost certainly the best in the NFL. You can’t go wrong on this one.

Rookie of the Year

This is always tough to predict. For every 2003, with Mike Logan starting all year and Troy Polamalu on the bench, there’s a 2013, with Larry Foote’s preseason injury and sixth round rookie Vince Williams in the lineup all year. This year, though, feels like a season where a rookie will be a legit star for the Steelers.

My Choice: Chase Claypool. I said before the season began that the Steelers don’t need any rookies to contribute this year for the team to win. And I hold to that. But Claypool has been a revelation anyway. I love the comparisons to Calvin Johnson; I actually see a little Terrell Owens in him too (though only ON the field — he seems like a genuinely good kid off of it). Claypool is only one-half of one season into his career, and he’s already a monster. Martavis Bryant, Antonio Brown, Mike Wallace, and JuJu Smith-Schuster all had impressive rookie seasons, but none of them had made a mark this early. This kid is the real thing. I can’t wait to watch him develop.

Newcomer of the Year

With the Steelers making a few moves in the free agency and trading market this season, I wanted to acknowledge that not all newcomers who matter are rookies. This is a little bit predictive — Williamson, for example, hasn’t been in town long — but that’s what we’re doing here. When the dust settles, who will have been the best pickup this season?

My Choice: RayRay McCloud. You can make a case for Eric Ebron already, or Avery Williamson as a projection, but I think McCloud has already become a cult hero in town. He’s the best overall return man we’ve seen in a while, and is becoming a legitimate part of the offense. For a low-key nothing-signing this offseason, what a find he became.

Comeback Player of the Year

This one often encompasses both “comeback from injury” and “comeback from poor/mediocre play.” The player was good once, but had slumped (or been hurt) and now has returned to the level they’re capable of.

My Choice: Tyson Alualu. Just like above, with DPOY, this is really Ben’s award, which I’m giving to Alualua to spread the wealth. But I think there’s a case here too. If we’re thinking of this as “improved” as well as “comeback” — that is, players who we knew had talent, but that have raised their game this season — then Alualu’s move to nose tackle deserves recognition. As evidence, notice how Steelers run defense has missed him the last two weeks.

For what it’s worth, I’m still pulling for Ben to win this at the NFL level.

(Side note: if Ben loses to Alex Smith, I’m going to be furious. Smith seems like a nice guy, and it’s cool that he came back to the league, but he’s not playing all that well. If “I put on the uniform after a gruesome injury” is all that goes into a comeback, then the Steelers should suit up Ryan Shazier for a game and put him on the field for the victory formation. Ben actually came back at a high level. That’s a big difference.)

This is different than “comeback” because these players aren’t guys who’ve proven they can play, then regressed or been injured, only to resurge this year. Instead, they’re players who I predict will come out of nowhere (or in some cases, out of mediocrity) and stand at the cusp of greatness. These are players who are becoming stars this season. (Side note: if it’s not obvious, I figured rookies have their own section, so I’m looking at vets here.)

My Choice: Robert Spillane. Raise your hand if you thought Spillane was going to be starting at ILB on one of the top defenses in football, and delivering two of the biggest highlights of the season (the goal-line thunder-strike on Derrick Henry, and the opening drive pick-6 against Lamar Jackson). Hmm, No one else, either, eh? If he keeps balling out like this, he may be positioning himself to eventually replace Vince Williams and line up alongside Devon Bush sometime in the future. Who saw this coming? Amazing.

Assistant Coach of the Year

In some cases, these coaches are new to their positions and leaving their mark; in others they’re getting the most out of players they already know. All of these guys are doing good work.

My Choice: Shaun Sarrett. Canada is probably the trendy pick, but I’m giving Sarrett the nod because the Steelers offensive line was supposed to take a few steps back this year — after losing B.J. Finney and Ramon Foster, and then Zach Banner, while as the best players put on another year of wear/tear, and the top free-agent backup (Steve Wisniewski) has been injured (and now cut). Instead, the offensive line has been stable and largely pretty good. Sarrett got Chuks Okorafor into the lineup smoothly, has helped make Kevin Dotson a surprise rock at guard, and kept Matt Feiler delivering. This isn’t the strongest O-Line we’ve ever seen, but it’s doing the job — which is certainly more than I’d have expected, given all the chaos.

Remaining Game of the Year

This was harder to come up with for some reason. The absence of New England on the schedule, the quieter offseason out of Cleveland, and the lack of a real grudge game from last year just kind of softened the schedule. That said, Baltimore will always matter. Meanwhile, Buffalo is surging still. Cincinnati has a good young passer (and is playing with house money), which makes them dangerous. Philip Rivers vs. Ben Roethlisberger is always worth watching too. And the division might still be in jeopardy in the final week at Cleveland. Did I miss any? You tell me.

My Choice: Week 12 against Baltimore. The Ravens probably hate themselves for the way they lost to Pittsburgh the other week. And they figure to NOT put the game in Lamar Jackson’s hands nearly as much (seeing as how he’s now played his two worst career games against the Steelers). So this one could really go either way. It’s on national TV (Thanksgiving), which the Steelers always rise to, and it will be in Pittsburgh. And it could have massive playoff implications. This will be a decider.