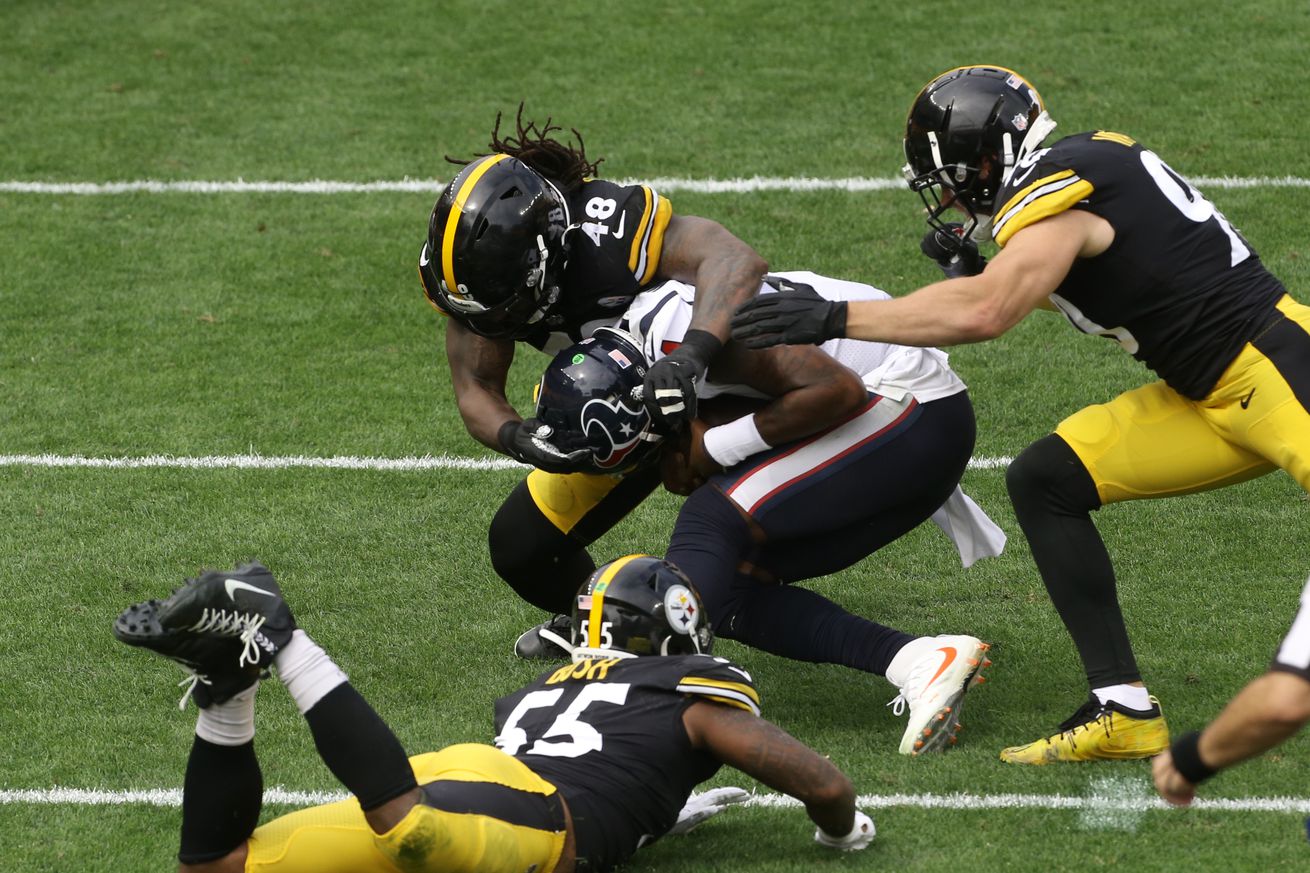 An educated guess at who will shine for the Black & Gold (or not) in the second half of the season.

This is Part 2 of a series, debating midseason “awards” for the Steelers. Part 1, featuring more traditional awards, can be found HERE. In Part 2, I wanted to speculate about some less traditional awards. I’m making these up as I go (or using the titles from last season).

I’ll keep my explanations minimal since so we can just get to the polls. My goal, as always, is to start a few arguments in the comments section, so have at it. On with the show. Go Steelers.

Here’s the shorthand version (with my picks). Explanations and polls to follow.

This category is probably self-explanatory. It refers to phenomena, rather than individuals or positional units (those will come later).

My Choice: Tackles for Losses. We talk a lot about sacks with the Steelers, but TFLs matter too, and the Steelers are absolutely dominating this category. They lead the league with 59, despite playing one fewer game than most. On a per-game basis, they’re getting more than one per game more than the league’s #2. Moreover, Vince Williams and T.J. Watt sit at numbers 1 and 2 in the league outright, as well as per game. The Steelers are killing it in this realm.

Again, like with “pleasant surprise,” this refers to phenomena, rather than units or individuals.

My Choice: Third down defense. There’s a lot of overlap in these Venn diagrams — splash plays and inability to play 60 minutes both affect the third down D — but my biggest frustration has been with how often the Steelers give up big conversions.

My Choice: Outside Linebackers. This was oddly hard to compile. I think the Steelers are pretty strong across the board, but not spectacular in most areas. That’s probably how they keep winning even as starters shift in and out. In any case, I strongly considered WRs (who seem deeper than ever, but also have struggled a lot with drops this year) and DLine (which is probably the best unit when they’re healthy, but without Tyson Alualu, they seemed to suffer). Meanwhile Watt and Bud Dupree are both stars this year, and Alex Highsmith looks ready for the big leap too. Maybe it’s a coin-flip, but I liked OLBs best.

My Choice: Quarterback Depth. I’ve been beating the drum for an experienced backup QB for a while. It’s possible that Mason Rudolph will be fine for a game or two if needed, but I don’t see it. And Josh Dobbs and Devlin Hodges are even lower on the totem pole. (Oddly, I think Duck is the best choice for short term relief, because he’s a confident wildcard. Rudolph looks to me like he’s in over his head every time I see him.)

P.S. I noticed in writing this one that there really isn’t a single starting unit that’s a weakness. That’s kind of nice. I even had to remove “Punter” which was originally an option, because Jordan Berry came back and is kicking really well. Some of you might disagree (hence: “other”) but that’s my reading.

My Choice: Vince Williams. VW is having a career year this season. As mentioned above, he’s leading the league in tackles for a loss, and leads the Steelers in combined tackles, solo tackles, and assists, while also sitting at third on the team with 3.0 sacks. And all this without Devon Bush beside him.

This is a category for players who we had high hopes for, but who have seemed to disappear. I’m thinking of Morgan Burnett, who was brought in to solidify the safety position, couldn’t stay healthy, and ultimately made more-or-less no impact on the team at all.

My Choice: Steven Nelson. Nelson was practically a shutdown corner last season, While he only had one interception, he held opponents to 50% completions, NO touchdowns, and a 65.8 rating. This year, Nelson has two interceptions, and only has two missed tackles all season (which is third best among Steelers starters), but he’s giving up 62.3% completions and a 109.6 rating. I don’t know what’s changing, but I hoped for more from Nelson this year.

Next Man Up Award:

I want to name this the “Chris Hoke Award,” but doing that would mean I’d have to come up with a corresponding player’s name for each of these, and I’m already late in posting this.

My Choice: Robert Spillane. This probably speaks for itself. Spillane has played outstanding in releif of Devon Bush, and even provided several of the biggest defensive highlights we’ve had this year.

Emphasis here is on “regular season.” That is, “I want them to win the Super Bowl” doesn’t count. We all want that. What do you want to see in the meantime.

My Choice: No more significant injuries. As always, I want all of these, but this team is probably the most balanced in football. If they can avoid losing too many crucial parts, it won’t matter if they drop a few games, if their stats sag a little, or if they get the #1 seed or not; they’ll still be in position to win a title.

This category is reserved for starters who, regardless their season so far, seem primed for a big second half.

My Choice: Minkah Fitzpatrick. This is proably cheating, since Minkah started lighting it up two weaks ago. But I’m predicting that he’s on the cusp of another bang-up season. Will he be an All Pro again? I don’t know, but if he keeps up his current pace, the odds favor it.

Backup about to get a lot more minutes:

This award differs from the last in that I’m looking for backups/depth players who appear primed for a lot more playing time in the season’s second half. You might think about Martavis Bryant, who didn’t even dress for the first few games of 2014, but then erupted with seven touchdowns down the stretch.

My Choice: Alex Highsmith. Highsmith is at a great crossroads: he’s coming on as a player right as the season starts to drag on (and other guys figure to get banged up more often). I see him mirroring Lamar Woodley’s rookie year, in which Woodley spelled Clark Haggans all seasons, came on at the end, and entered year 2 as a powerhouse starter opposite a superstar.

Okay. Back to the grind. Go Steelers.