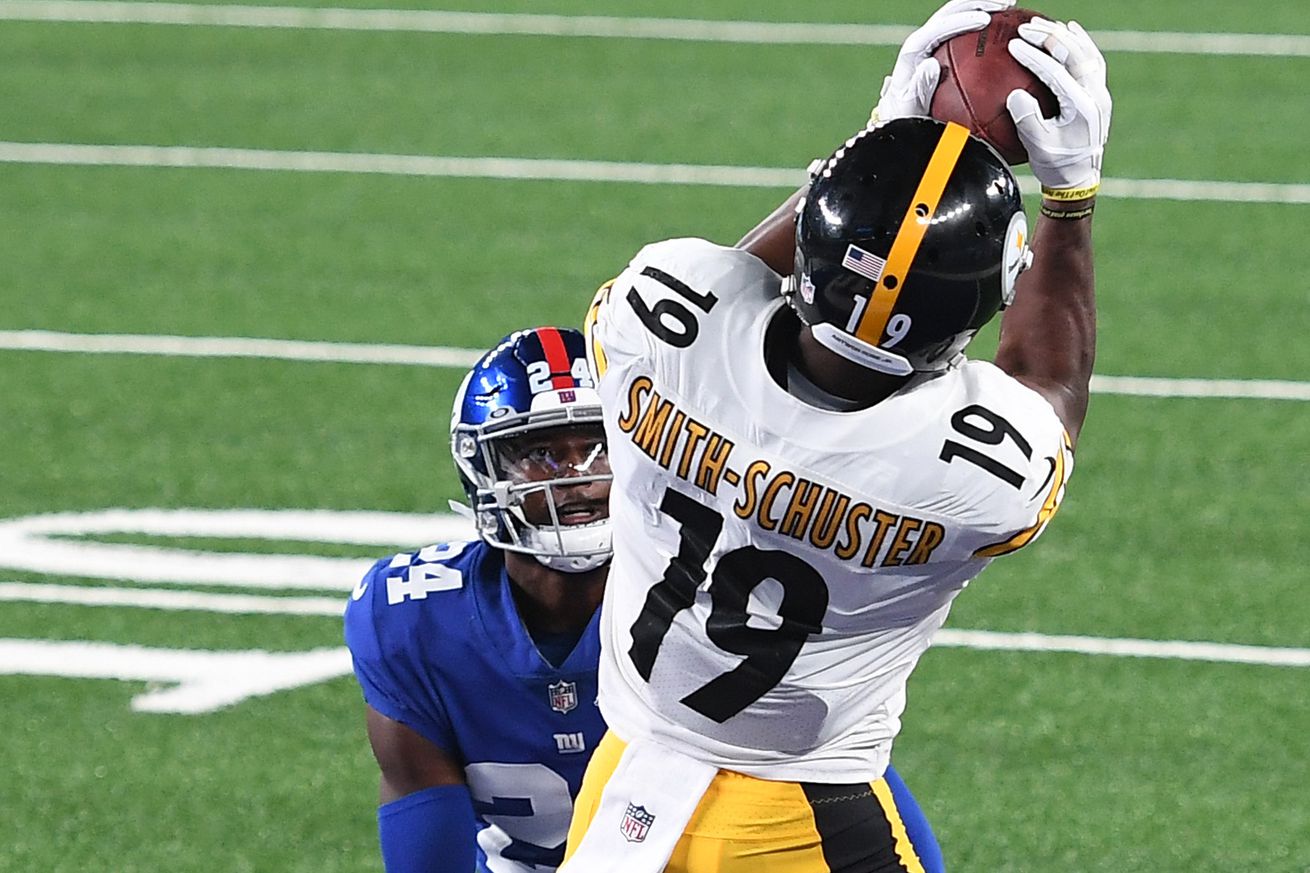 Not many surprises as the Steelers knock off the Giants, 26-16, at MetLife Stadium on Monday Night Football to kickoff their 2020 campaign.

There were many unknowns as the Steelers prepared for the 2020 regular season opener against the Giants at MetLife Stadium on Monday Night Football.

For starters, how would their returning franchise quarterback, Ben Roethlisberger, look after being sidelined for almost exactly one year with a major elbow injury? How would the team perform as a whole after an offseason that was unlike any other and didn’t include OTAs, rookie camp and mini-camp. As far as training camp? That didn’t include much news that wasn’t process, filtered and censored.

But if you were like me and expected Monday night’s season lid-lifter to start off slow and then pick up steam as the game progressed, you were not surprised by the Steelers 26-16 victory and workmanlike performance.

It was a game that went pretty much according to plan for a veteran team expected to return to its former contender form and was taking on a squad coming off a four-win season and doing so with a new coaching staff and a youthful quarterback.

It wasn’t a work of art, but the Steelers didn’t color outside the lines at an alarming rate, either.

There were some special teams gaffes, including a fumbled punt by second-year receiver Diontae Johnson early on that set the Giants up at Pittsburgh’s own three-yard line and delayed the 2020 debut of Roethlisberger’s surgically-repaired right elbow.

But no surprise, Pittsburgh’s defense, one that’s expected to be about as dominant as it was in 2019, clamped down and held the Giants to a measly field goal.

The offense was sluggish at the start, as Roethlisberger and his receiving targets were a bit out of sync early—that couldn’t have been a surprise to many—and the unit failed to move the football at an efficient rate for most of the first half.

Before I move forward, I must say that Roethlisberger’s elbow, while a bit rust early on, looked pretty darn good the entire night, as he made throws from the pocket, on the move and while being accosted by Giants defenders (vintage Big Ben).

The Giants jumped out to an early 10-3 lead on a drive that was aided greatly by a questionable pass-interference call on cornerback Joe Haden—questionable pass interference calls on Joe Haden are never a surprise these days. But just when it looked like the home team would seize control in front of its virtual fans (no fans were allowed to attend MetLife Stadium, so they had to cheer their G-Men on from their living rooms), T.J. Watt made his first of what should be many herculean plays in 2020 when he jumped up at the line of scrimmage to snag a Daniel Jones pass and set his team up at New York’s 36-yard line early in the second quarter.

Roethlisberger took advantage of the gift by ultimately finding receiver JuJu Smith-Schuster for a 10-yard touchdown pass. Yes, Chris Boswell missed the extra point, but judging by the way kickers were misfiring all around the NFL in Week 1, I guess that really wasn’t much of a surprise, even if Boswell didn’t miss any PATs in 2019.

After that, it really was all Steelers.

The defense was pretty dominant. It allowed some plays, but this is the NFL—that’s going to happen. Overall, the pass-rush was relentless, led by outside linebacker Bud Dupree who didn’t record any of Pittsburgh’s three quarterback sacks but seemed to be in Jones’ hip-pocket all night and provided the pressure that forced the errant throw that defensive lineman Cameron Heyward intercepted in the end zone late in the third quarter. That’s right, just when it looked like New York would go back in front after the Steelers had built a 16-10 lead on a Roethlisberger to James Washington 13-yard touchdown right before halftime, the defense, one that had bent a little over the course of the first 18 plays of a drive that had covered 87 yards and ate up nearly nine minutes of clock, ultimately broke the Giants back with yet another goal-line stand.

After last year, multiple goal-line stands by this defense are never a surprise.

Overall, the defense allowed 291 yards, but only 29 on the ground, including a mere six by running back Saquon Barkley (okay, that may have been a bit of a surprise).

As for the Steelers offense, it wasn’t perfect, but it appeared to get stronger as the game went along. Roethlisberger completed 21 of 32 passes for 229 yards and three touchdowns, including two to Smith-Schuster who, SURPRISE, looked really good catching passes from a franchise quarterback.

It wasn’t a great night for James Conner who carried the football just six times for nine yards and left the game with an ankle injury. Unfortunately, Conner getting hurt wasn’t much of a surprise. Hopefully, he gets well soon, but if he’s out a while, the ground game appears to be in good hands after second-year back Benny Snell Jr. rushed for 113 yards on 19 carries.

The only depressing part of Monday’s game for Steelers fans was the news that the team lost two of its offensive linemen to injuries. Zach Banner, who rose to the challenge to win the starting right tackle job at training camp, left the game late in the fourth quarter with a knee injury that, as of this writing, looks pretty darn serious. Also, Stefen Wisniewski, a veteran who was signed by Pittsburgh in the offseason to provide great depth along the interior line, suffered a pectoral injury after spending most of the night playing well at right guard in place of an injured David DeCastro.

Hopefully, the news on both is of the good variety.

As for the rest of the Steelers team? I think their performance on Monday night was a nice little preview of what to expect in 2020.

No surprise, the Steelers are contenders again.