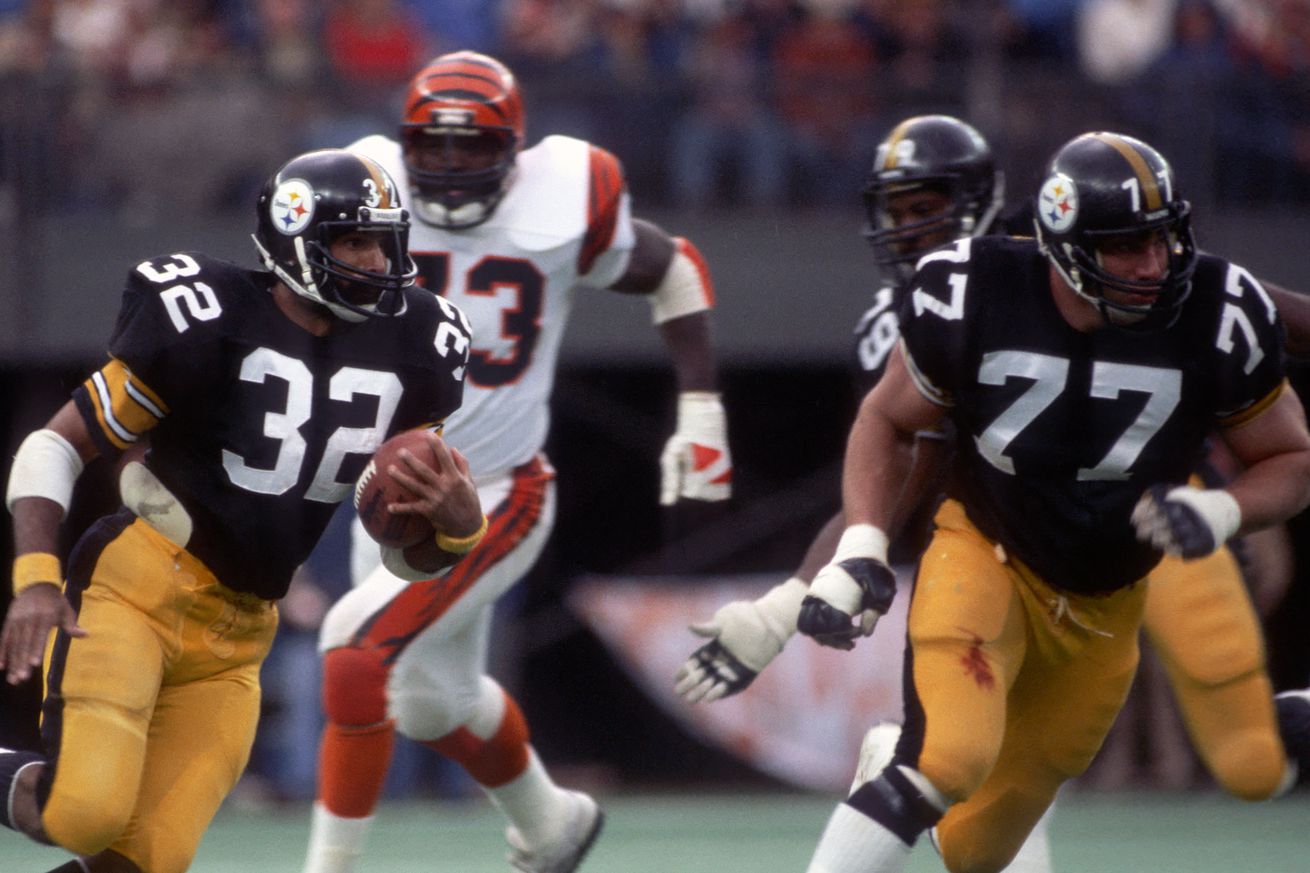 The Steelers have had a plethora of great players representing one number over the years. Find out which one number is ranked 12th.

BTSC continues to rank the best numbers in team history on a standpoint of thriving over time throughout multiple players. It seems there are a few numbers which are always represented with quality play in Steelers lore. One BTSC author has wondered aloud “what is the most accomplished number in Steelers history?” Through player and jersey value rankings found in Pro Football Reference, we have ranked the most successful numbers in Steelers history worn by multiple players. You won’t see numbers like 12, 58, 75, 31, 32, 52, 59, 36 and 47 as it would be basically ranking an individual player over the other and not the cumulative effort. In today’s submission, we take a look at those ranked 12th. Enjoy.

The No. 77 for the Pittsburgh Steelers was never rife with superstars, but it clothed solid players over the years. Let’s take a look at six of these Steelers to don double-sevens.

Marvel Smith started 108 games at the tackle position in Pittsburgh. The second-round pick out of Arizona State was valuable as Ben Roethlisberger’s blind-side protector in a career that earned Smith two Super Bowl rings. Marvel started 108 out of 111 games in his Steelers career and went to the Pro Bowl in 2004. After missing the postseason in 2007 and the Super Bowl XLIII season of 2008 due to injury, Smith retired from football after spending his entire nine-year career in black and gold.

Will Wolford didn’t play for the Steelers long, but the long-time Buffalo Bills player was a very important piece of the offensive line in the late 1990s. After a three-year stint in Indianapolis, the three-time Pro Bowl selection and 1992 All-Pro joined the Steelers in 1996 as a free agent. Wolford arrived in the Steel City in the same offseason in which Jerome Bettis did. While Will was no longer in his prime, the guard’s play was a prime factor in “the Bus” rushing for an average of 1,427 from 1996-1998. Wolford played most of ‘98 with a torn chest muscle and chose to end his career. After 13 NFL seasons and three in a Pittsburgh, Will Wolford’s career in the league ended with a solid run as a Steeler.

Carlton Haselrig arrived in Pittsburgh as one of the greatest college athletes of all time, but not as a football player. The six-time NCAA Heavyweight Champion (Both D1 and D2) at the University of Pittsburgh at Johnstown played football in high school, but was a wrestler at the college without a football program, So the future NCAA Hall of Famer focused on wrestling where one of many highlights was defeating Olympic Champion, WWE legend and Pittsburgh native Kurt Angle on the mat. Not expecting to be drafted, Haselrig was talking to NFL teams who saw potential in his skills as a possible undrafted free agent. The Steelers, however, drafted Carlton in the 12th round in 1989. Haselrig started out as a defensive lineman, but played both ways on the scout team. Realizing his wrestling skills were more suited for the offensive line, Chuck Noll switched “the Rig” to the other side of the line in 1990. By 1992, Haselrig was a Pro Bowler at guard. After injuries mounted and the grappler turned football player missed all of 1994, Haselrig left the team after five seasons for a season with the Jets in 1995. He retired after 11 starts that year with New York. After stints in MMA, Carlton is coaching in his hometown at UPJ.

The Joe Greene Great Performance Award winner in 2011 for the Steelers top rookie was Marcus Gilbert. A second-round pick that season out of Florida, Gilbert beat out Cam Heyward who was picked in the first. The solid right tackle wore the digits for the Steelers until 2019 when he was traded to the Cardinals after two seasons ravaged with injuries. A National Champ for the Gators, along with linemate Maurkice Pouncey, Smith anchored the right side of the line for eight seasons.

Steve Courson came to the Steelers in Round 5 of the 1977 NFL Draft out of South Carolina. He played in Super Bowl XIII and XIV and was a starter in the seasons of 1981 and 1982. After six seasons in Pittsburgh, the Gettysburg HS star played two more years in Tampa after a trade. As a Gamecock, Courson started using steroids and his weight went from 225 to 260 in 45 days. In the pros, Steve could bench press 605 pounds and became ashamed that he wasn’t achieving on his own. The drugs also caused him to need heart surgery and other problems. The offensive lineman became one of the first players to speak out about the drug in Sports Illustrated in 1985. Conducting 100 speeches a year to high school students, Courson allegedly fell out of favor with the league because of his outspokeness of the problem. The former Steeler died at age 50 when a tree he was cutting changed directions from the wind and struck Courson as he was attempting to save his labrador.

Dan James started 91 games for the Steelers from 1960 to 1966 at the right tackle position. James wore the double-fives his first season after coming over from the 49ers as an eighth rounder in 1959. His second season, James switched to No. 77 and held down the right side of the line protecting quarterbacks Bobby Layne, Rudy Bukich, Ed Brown, Ron C. Smith and Bill Nelsen. James passed away in 1987 at the age of 49.

Check back soon for the 11th best jersey in BTSC’s countdown of the most prolific jersey number stables in Steelers history. But first, a recap of the countdown so far.