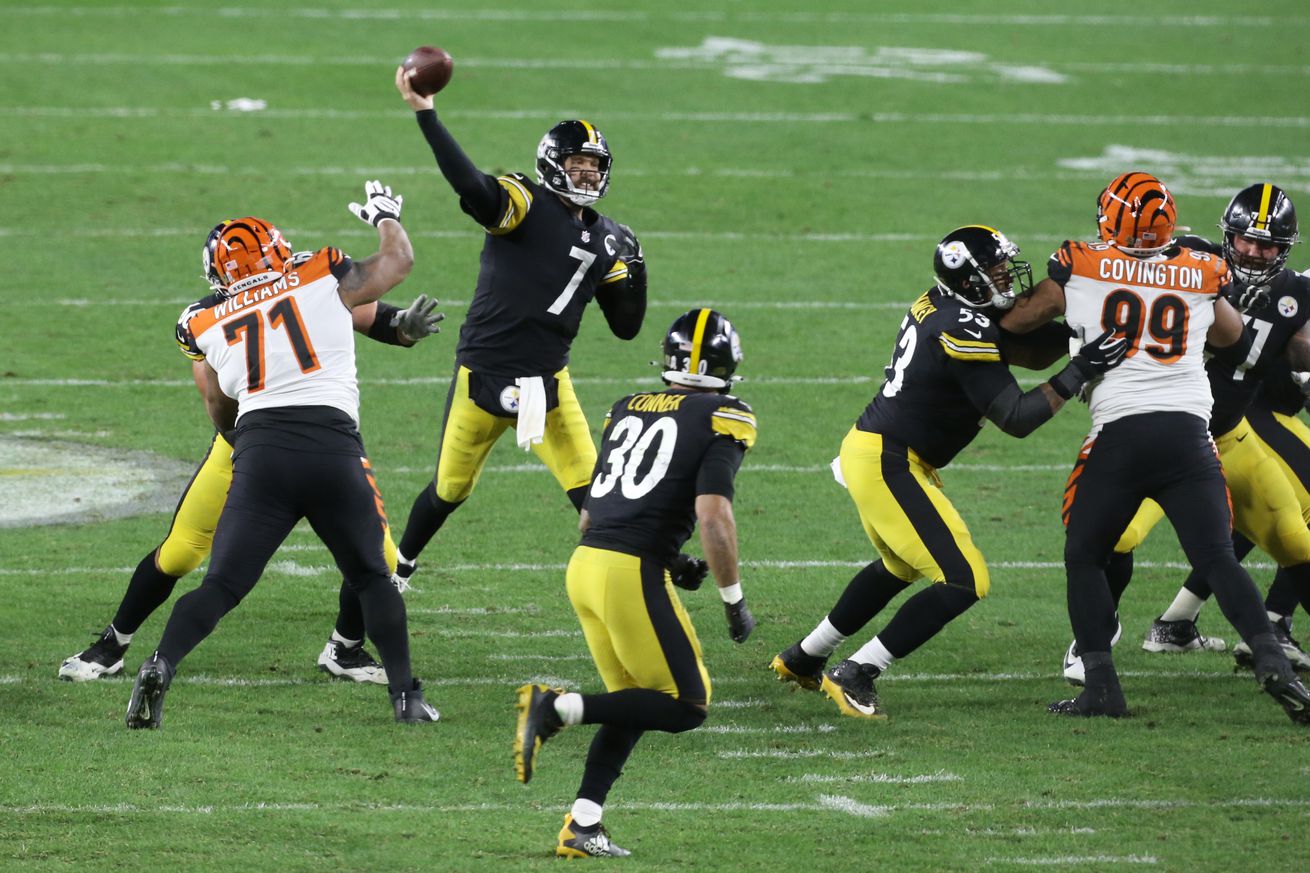 The Pittsburgh Steelers didn’t just dink and dunk their way to a win in Week 10.

Any fan of the Pittsburgh Steelers who has paid attention throughout the team’s red-hot 9-0 start to this 2020 regular season has heard the criticism of the offense.

No, not the lack of a running game which has popped up recently, but the questions on whether Ben Roethlisberger could still deliver the big play downfield. It wasn’t due to a lack of arm strength after season-ending elbow injury in 2019, but just an inability to complete all of the necessary throws to be considered the elite quarterback he was prior to his injury.

After some big passes, including one big time throw to Diontae Johnson, vs. the Cincinnati Bengals in Week 10, Roethlisberger continues to check boxes off his to-do list. Even the folks at Pro Football Focus (PFF) have taken notice.

Through the first nine weeks, Roethlisberger leads the league in the shortest average time to throw (2.18 seconds). His quick release wore out the Bengals’ pass rush, which generated pressure on just 8.7% of his drop backs. The Steelers’ offense produced seven explosive pass plays that went for 15 yards or more, and Roethlisberger completed two big-time throws to show he still has the ability to push the ball downfield.

Simply put, the Bengals’ secondary could not match up with the depth of playmakers the Steelers have at their disposal in the passing game. Whether lined up against Diontae Johnson, JuJu Smith-Schuster or Chase Claypool, Tony Brown could not hold up in coverage at his wide corner position. He surrendered six catches off of 12 targets for 84 yards and a touchdown. Roethlisberger went after Brown in critical situations and completed five passes against the third-year defender for first downs.

The Steelers left a lot on the field, especially on offense in the first half, but you would be blind to not see the evolution, and development, of the Pittsburgh offense. Are there still areas of concern? Absolutely. I did mention the lack of a competent running game earlier. However, the offensive line is doing a great job protecting Roethlisberger, and Roethlisberger is delivering to his wide array of weapons on their way to a perfect start.

Great start, but more work to be done…all while starting 9-0.

Be sure to stay tuned to BTSC for the latest news and notes surrounding the black and gold as they prepare for the Jacksonville Jaguars in Duval county Sunday in Week 11.