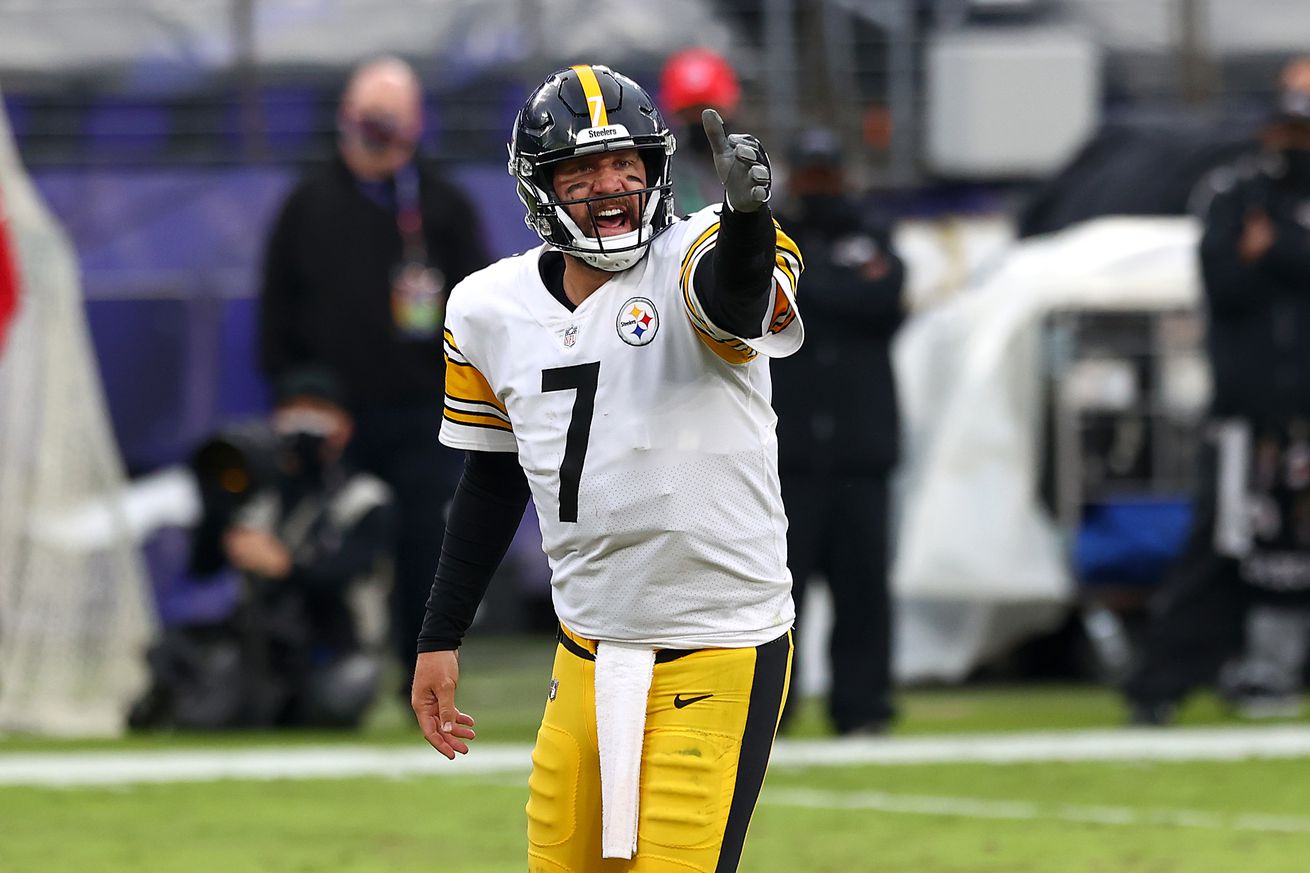 The Pittsburgh Steelers won in Week 8 via the arm of Ben Roethlisberger. The no-huddle was their mode of transportation, but it wasn’t really Roethlisberger drawing up plays in the dirt.

I can’t speak to your childhood, but a large portion of my upbringing was spent playing backyard football. The neighborhood gang getting into two teams, and scrapping. Nothing less, nothing more.

But during those games, the play calling was always something of legend, or so we thought. Players screaming they are always open, and quarterbacks saying things like, “Go to the tree and cut in.”

Backyard football at its finest.

Pittsburgh Steelers quarterback Ben Roethlisberger has often been referred to as ‘Backyard Ben’ for his ability to ad-lib and make something out of nothing. There have been moments in his career where this improvisation was born out of necessity. When you think about times where defensive linemen were on his back, only to be thrown off and a big play completed down the field to the likes of Santonio Holmes or Antonio Brown. But recently the improvisation is allocated to the no-huddle offense. The same offense which took over the Baltimore Ravens defense in Week 8 en route to a 28-24 win at M&T Bank Stadium.

Roethlisberger spoke about the second half and how the offense was functioning more like a backyard game than an orchestrated NFL offense.

“I’ve got to give a lot of credit, especially in the second half, to the receivers and tight ends.” Roethlisberger said. “I was just telling the line the protections and moving guys around and playing backyard football, if you will. I don’t know if we called too many ‘plays’ in the second half when we were in that mode. It was just more, ‘Hey run this, run this, run this’ and to me, that’s just credit to the receivers, [Eric] Ebron and other guys that just want to make plays. I was able to get the ball out of my hands and get guys the ball in their hands and let them make plays. They made so many plays in the second half. It was awesome.”

Since then, both Mike Tomlin and offensive coordinator Randy Fichtner have downplayed Roethlisberger literally throwing the team on his back and finding a way to win. This is what Tomlin had to say during his weekly press conference Tuesday.

“Adlibbing is a stretch. We run some no huddle. We have protections and within those protections, [Ben Roethlisberger] has some options in terms of route combinations on either side of the field is a function of how we move in no huddle, if you will, in two-minute and situational ball.

“We were behind 10 against the Baltimore Ravens, a group that possess the ball and does a really good job of possessing the ball. I don’t know that they have lost a game the entire time Lamar Jackson has been starting when leading at the half, so it required that we pick the pace up and utilize some of that stuff. We weren’t drawing in the dirt, as you suggest.”

On Thursday, when Fichtner spoke with the media, he too doused Roethlisberger’s excitement and play making ability with another bucket of cold water.

“I think drawing up plays in the dirt would be a stretch. The ability to call within a framework of what you might have in a system is probably what you’re talking about. As soon as you would say draw up in the dirt, I said I don’t really know if [Ben Roethlisberger]’s ever drawn up in the dirt. Maybe sometime extending plays, he’s done the Superman thing at his position to make things start to happen, but he did a really nice job of trying to take advantage of the looks he was seeing.

“Give credit to Baltimore. They give you an awful lot of looks. They stretch you in an awful lot of ways. At least in the end, we were able to and he was comfortably able enough to move the football.”

In all seriousness, Roethlisberger’s post-game comments actually do line up with what Tomlin and Fichtner have said this week in preparation for the Dallas Cowboys in Week 9. Roethlisberger is able to adjust protections, call plays and give receivers specific assignments in the structure of the Steelers’ no-huddle offense.

No, it isn’t literally drawing lines in the dirt, but it is as close as it gets in today’s National Football League. As Fichtner knows form working with Roethlisberger for many years, sometimes you just have to get out of his way.

“Oh yeah. A lot of times, it might just be as simple as “Get out of his way.” Sometimes, it’s as simple as saying, “It’s second-and-5. Remember it’s third-and-2. Pressure.” Then you just have to let it go because if you’re going to do no huddle it’s hard to kind of be half-in half-out. I think that’s what’s allowed for him to be able to feel and to be as successful as he is.

“Believe me, I have no ego. I want to move the ball as much as anyone for the Pittsburgh Steelers and for the guys that are responsible for it in the offensive room. Whatever gives us the best chance to do that, we will do. At various times in game, we’ve used no huddle to change the tempo. We’ve used no huddle to finish out games. We’ve used no huddle to – It’s nice and easy flow at the half because there’s a two-minute drive, and a lot of things come out of that. Obviously, if you get put in the two-minute drive at the end of the game you feel like all the work and the reps and the timing we’ve had in no huddle would really help us show in that two-minute-type situation if you had to go win the game.”

This season has been one of progression for Roethlisberger. At first it was his intermediate passes which were showing signs of rust, then his deep passes and now it seems as if he has checked yet another item off his to-do list. The ability to put the offense on his shoulders and win a football game.

Fichtner knew that player was always there, even coming off his elbow surgery.

“There were plays being made like you can’t believe. But Ben is just like anybody else. The whole group, it might take a little bit of time to get all of them together and playing. I don’t think we’ve even come close to playing near our best football game. I think we’ve put together a couple quarters here, a half here.”

The Steelers average 30.1 points per game through seven games in 2020, and they haven’t played their best football yet. That is a scary proposition for the rest of the NFL, and one Steelers fans should be excited to see develop this season.

Stay tuned to BTSC for the latest news and notes surrounding the black and gold as they prepare for the Cowboys in Week 9.