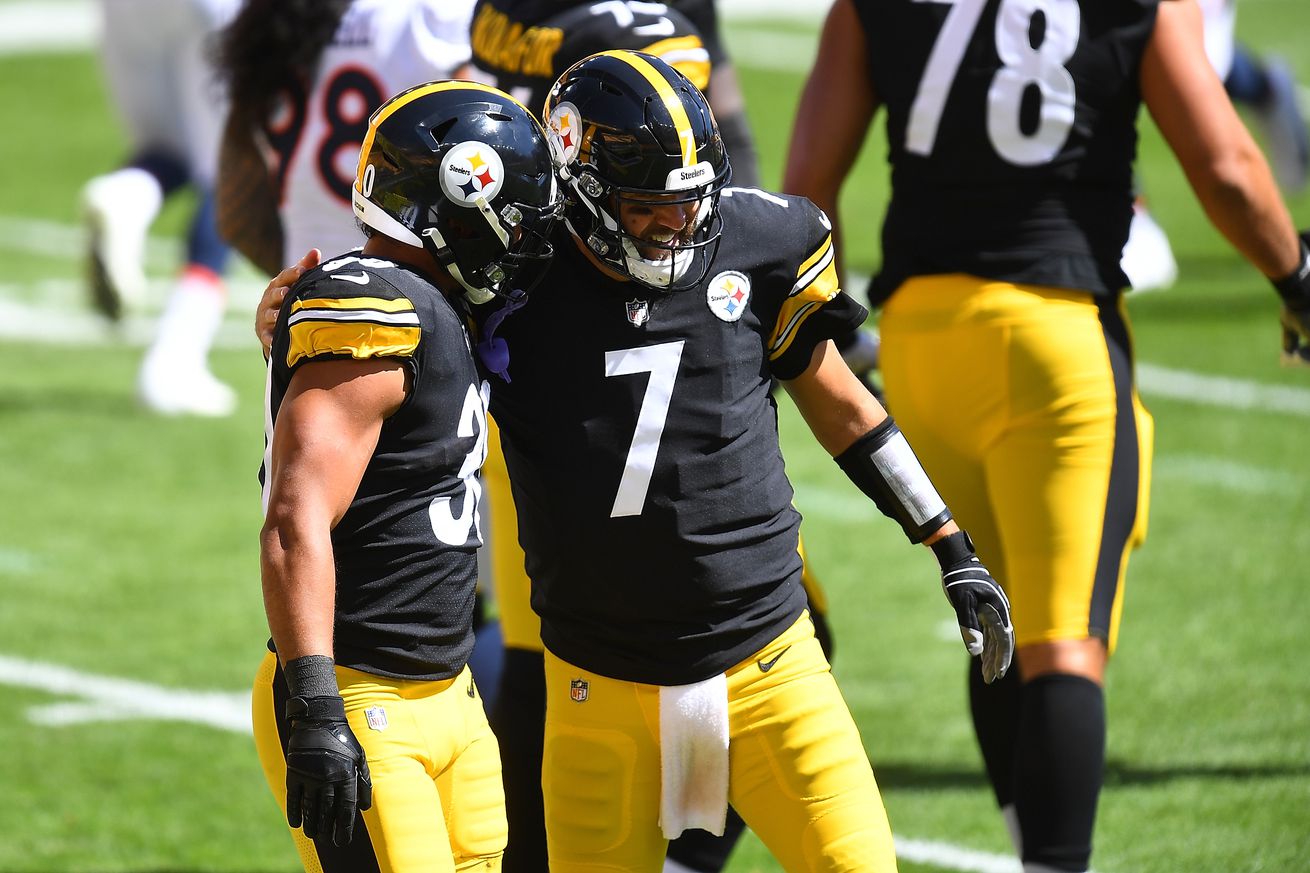 It’s a week later than anticipated, but the Pittsburgh Steelers have finished the first quarter of the 2020 NFL season. For the first time in more than 40 years, the Steelers come out of the quarter pole undefeated with a 4-0 record. But how are they performing as individual units? The staff at BTSC are throwing their grades on the Steelers offense, defense, special teams, and coaches as well as their overall performance.

Dave Schofield: A–
Ben Roethlisberger is back and has so many weapons to spread the ball around. This grade is on the ascension.

K.T. Smith: A
Who knew Ben Roethlisberger would look this good in his return or that Chase Claypool would resemble Calvin Johnson so soon? Life is full of (pleasant) surprises.

Geoffrey Benedict: B-
I will not let one game drive the grade for 4 weeks, and I’m not grading on a curve compared to last season. The offense ranks 15th in percentage of drives that end with a score, that’s average.

Jeff Hartman: B
This unit is only going to get better, but they have been taking huge strides every week. It hasn’t always been smooth sailing.

Big Bro Scho: B+
Balanced attack and spreading the ball around. Ben Roethlisberger’s chemistry with the receivers will continue to improve as the season continues.

Shannon White: B
The Steelers offense still has plenty of room for improvement and the ability to do just that with Big Ben at the helm surrounded by quite possibly the best assortment of talent in his career.

The Steelers are averaging 29.5 points per game and haven’t quite found their groove yet. Ben Roethlisberger is playing a very intelligent brand of football and his young weapons are eager to learn from the master.

Anthony Defeo: B+
Pittsburgh’s offense hasn’t been explosive, but it’s been highly effective. So far, the Steelers are averaging nearly 11 points more per game than last year. That’s good enough for me.

Dave Schofield: B+
While certain parts of the Steelers defense are A+, it’s a whole unit grade. The Steelers need to clean up the third down conversion rate.

K.T. Smith: A-
A wise man once said, “Style points don’t matter.” It hasn’t always been pretty but the defense is 1st in sacks, 3rd in yards per game and 6th in points per game.

Geoffrey Benedict: A
This is a top 5 defense and people act like it is weak. This is what a top defense looks like in the 2020 NFL.

Jeff Hartman: B+
Everyone will point to the secondary, but this defense is still legit in almost every facet. Then again, there is that secondary…

Big Bro Scho: B+
I don’t think we’ve even begun to see all the tricks this defense has at it’s disposal. The next few games will show if things are fine or if there is legitimate concern.

Shannon White: B-
This defense has the talent and depth necessary to be dominant. The rush defense and pass rush have been special. Now it’s time for the secondary to uphold their end of the deal.

The Steelers have nearly surrendered a few leads and the secondary has not performed brilliantly like last year. But the team is still 4-0 and the front seven is absolutely lethal. But I still think the unit is only playing slightly above average against the pass.

Anthony Defeo B
Not where it was last year, but you’re not going to hold teams under 20 points very often in today’s NFL. The defense still gets after the passer and takes the football away. Defenses that do that can win.

Dave Schofield: A-
The punting hasn’t been excellent, but the return game and coverage have been great so far. Other than the early missed PAT, Chris Boswell has been money.

K.T. Smith: B+
I will not be happy with the special teams until they draft a punter in the first round.

Jeff Hartman: A
How can you not give this unit an ‘A’? Great kick coverage and returns have become the norms, and no penalties either. I’ll take that.

Big Bro Scho: A
Coverage has been great, the return game much improved. Anytime special teams has no big negatives it is easy to give them an A.

Shannon White: A
The Steelers special teams have actually been special thus far this year. McCloud has been an answer to prayer, and penalties are down. Excellent job, all around.

Danny Smith Jr has his charges playing well. The coverage has been solid, Chris Boswell has been very reliable and the combo of Ray Ray McCloud/Diontae Johnson has elevated the return game. But they haven’t broken one yet, so not quite an A. But close.

Anthony Defeo A
I’d say this is the best the unit has looked in coverage in quite a while. Also, Pittsburgh now has two viable return specialists in Diontae Johnson and Ray-Ray McCloud. Chris Boswell is money.

Dave Schofield: B-
“They didn’t kill us.” The Steelers coaching staff hasn’t made obvious blunders, but I’m still not confident they can out-coach the top tier staffs in the NFL on game day.

Geoffrey Benedict: A
With no preseason the Steelers have implemented a lot of changes to the offense, brought rookies along quickly, and they navigated the screwed up bye week really well. 4-0 is hard no matter what your schedule.

Big Bro Scho: B+
Coaching still has some issues, but seeing improvement from last year. If the first four games were the Coach’s preseason, the next four games better be their time to shine.

Shannon White: A
The Steelers coaches staff has done a tremendous job having all the young talent ready to perform when called upon. The results and perfect record at this juncture speaks volumes.

Mike Tomlin and staff have been absolutely phenomenal so far.

Anthony Defeo A+
Undefeated. Remember that time you got every answer right on a test, but your teacher didn’t think the questions were tough enough, so she gave you a C? Yeah, me either.

Dave Schofield: A
They aren’t perfect, but they haven’t lost yet. All you can do is beat the team you are facing each week.

Geoffrey Benedict: A+
This team has found ways to win, and they have 4 straight games with the offense gaining a first down running the ball then kneeling out the clock to end the game.

Jeff Hartman: A
A 4-0 start is exactly what fans hoped for. The best start to Ben Roethlisberger’s career and the best since 1979. Tougher games ahead, but as of now they are top notch.

Big Bro Scho: B+
Yes the Steelers are 4-0, but neither the offense nor the defense is firing on all cylinders yet. Do I think they get there? Yes, but not comfortable with an A grade until I see it.

Shannon White: A+
No OTAs or preseason games, Ben coming back from injury, tons of new faces in new places, and implementing motion aspects to the offense. 4-0 record. Drop the mic!

4-0 is something we’ve been craving for 41 years. The only other two times that happened the Steelers hoisted the Lombardi. We crave that as well.

Anthony Defeo A
It all averages out to an A.

So what do you think? Who at BTSC got it right? What grades do you give to Steelers for each position? Hopefully you answered each poll, but feel free to leave your comments below.