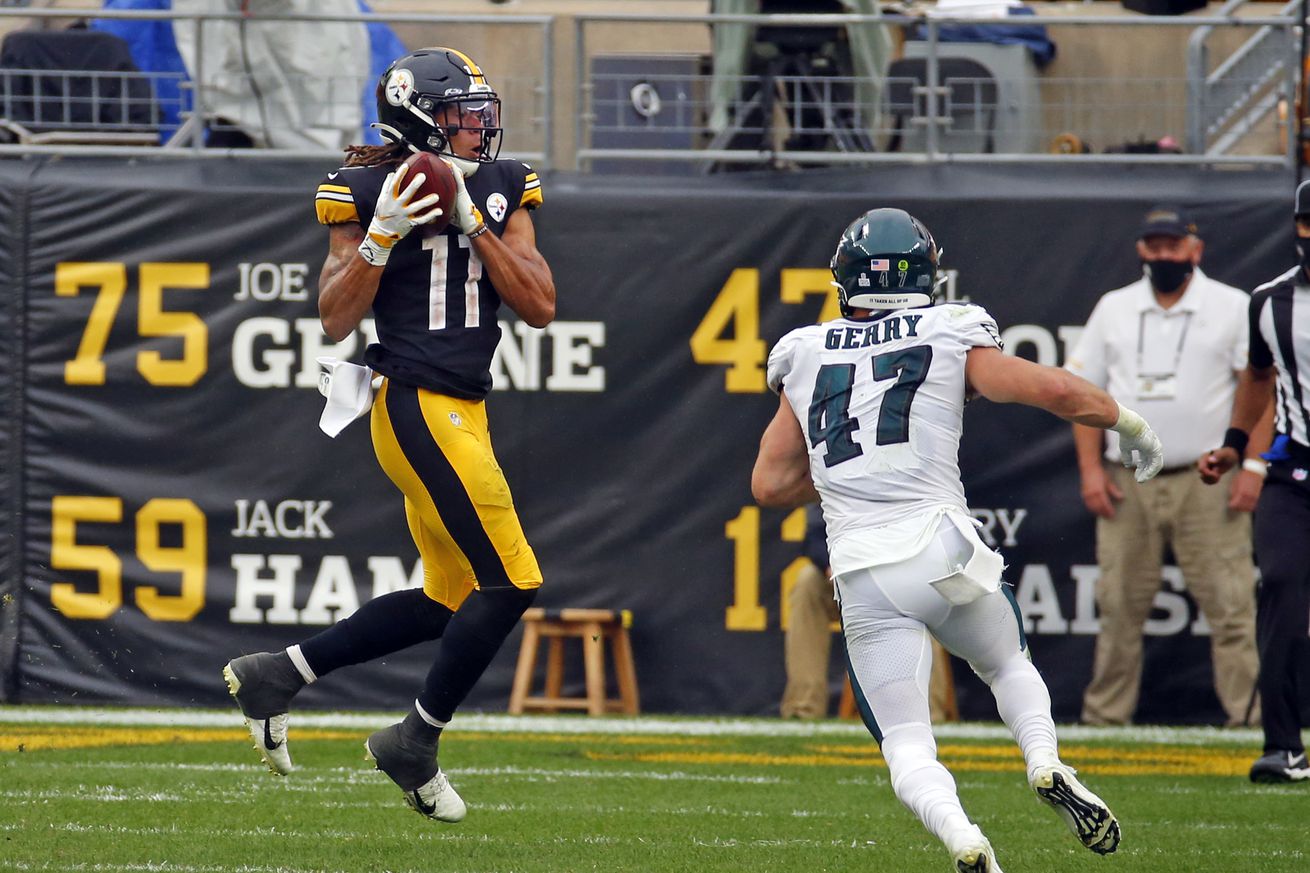 Breaking down the success and failures of Pittsburgh’s Week 5 performance.

The Pittsburgh Steelers were back in action following their Week 4 bye week. The cross-state rival Philadelphia Eagles rolled into town for a battle of the Keystone state. In a game full of ups and downs the Steelers emerged victorious and moved to 4-0 for the first time since 1979.

Let’s evaluate the team and highlight some individual performances. You may think my grades are spot on, you might also think I’m an idiot… Regardless, express your thoughts in the comments below.

This was nearly a perfect game for the Steelers offense, an untimely fumble and a couple missed 3rd down conversions from an A+. But let’s be honest, anytime an offense can put up 38 points they deserve a grade of at least a A-.

Ben Roethlisberger and Chase Claypool had a day to remember, and like their jersey numbers say 7/11 is open 24/7. The rest of the receivers didn’t get the ball much as a result of Claypool’s big day, so your fantasy teams may have struggled. As for the running game it was an all around average day for James Conner and company, but a monster play from Ray Ray McCloud pushed the Steelers rushing total over 100 yards for a fourth consecutive game.

As for negatives, the offensive line had a couple break downs, and Eric Ebron didn’t look very good in the fourth quarter both dropping and fumbling the football.

But other than that a great day from the Steelers offense.

It all started so well, back-to-back three and outs and the defense was flying all over the field. Then seemingly out of nowhere the unit lost all momentum, and never seemed to get it back. 5 sacks and a pair of interceptions keep this from being a F score, but they very nearly cost the Steelers a 31-14 lead.

The pass-rush disappeared for a long stretch of the game and some guy named Travis Fulgham absolutely shredded the secondary for 10 receptions, 152 yards, and a touchdown. Plus Pittsburgh native Miles Sanders scampered for a 74 yard score. A run where Mike Hilton should have wrapped him up for a minimal game.

Poor tackling was a theme for this game as Minkah Fitzpatrick, and Bud Dupree both gave up big plays after missing their guys at crucial spots in this game.

Two Steven Nelson interceptions and 5 sacks spread out along the defense, helps but the unit needs to figure it out and fast!

Most of the Steelers special teams units were relegated to the sideline in this game. The Steelers only punted twice and scored on their only field goal attempt (plus 5/5 on extra points). I was really impressed by the kick off team which seemingly has mastered the sky kick, where the ball is kicked for hang time landing in-between the opposing 5 yard line and end zone, then getting tacklers to the ball well before the 25 yard line.

Both return teams weren’t that special but didn’t receive many opportunities. Dustin Colquitt continues to look pedestrian in the punting game, but had decent placement on his two punts.

An average all around special teams day helped out by great kick coverage gets a B+ in my books.

Credit where it’s due the Steelers offense blended creative play design with (mostly) smart play calling against the Eagles and it’s reflected in the final score. Defensively, left a lot on the table. As Travis Fulgham continued to rip apart the defense, the Steelers refused to change up their matchups. It wasn’t until late in the fourth quarter when Joe Haden started following him around.

I wouldn’t be against the Steelers throwing in a fake punt or field goal in the game plan over the next couple games just to keep the opposition on their toes and potentially steal another possession, as long as it’s not to the detriment to the team.

The Steelers had a great day on the offensive side of the ball and pulled the defense to a victory. While yes, it would have been nice to bury the Eagles when the Steelers were up 31-14 they still walked away with the victory and the Steelers are sitting at 4-0.

The defense didn’t look good for most of todays game, but they are still brimming with talent. Hidden within the down game from the defense was a couple solid plays, and stuff to build off of. They’ll be fine.

Further on the plus side the Steelers are still yet to play a perfect game but continue to win football games. If this team can get all pistons firing by the playoffs they will be one of the most dangerous teams in the NFL.

While this game should never have been in doubt the Steelers walked away with a victory, and will play their first AFC North game of the season next week.

The Cleveland Browns have been rolling and the Steelers will need to play a better all around game to maintain its perfect record. Stay tuned to BTSC for the latest news and notes on the Steelers Week 5 battle with the Browns.