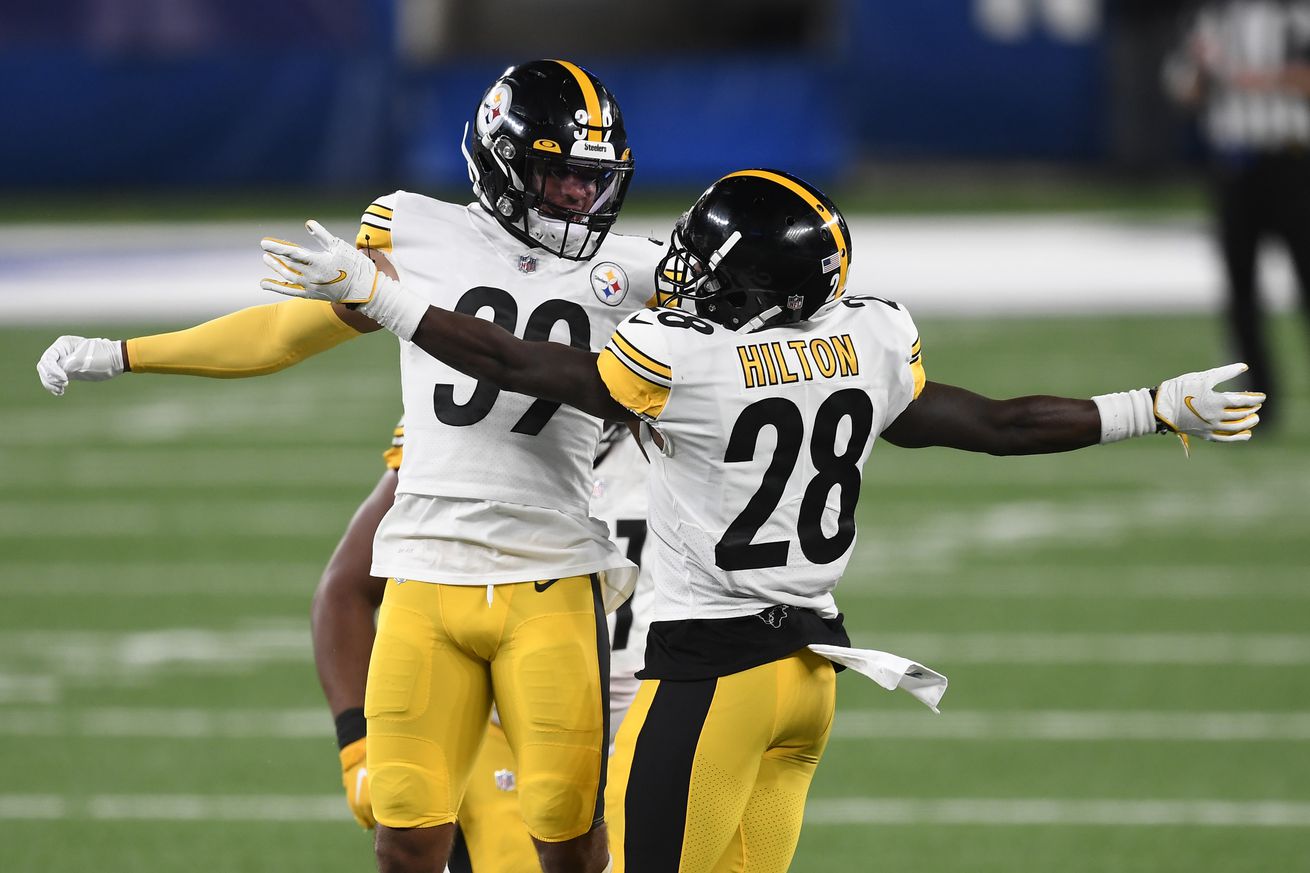 Breaking down the success and failures of Pittsburgh’s Week 1 performance.

For the Pittsburgh Steelers, they came into their opening game of the 2020 season with an opportunity to do many things, one of which was to make a statement about who they are and who they can be this year. It’s always a positive to start the season off with a victory celebration, but this is only the first step of a very long path to a hopeful playoff berth among other things. So how did the Steelers do tonight?

Let’s dive in and hash it out .

I won’t lie, five minutes into the game I saw this grade as an F, so I’ll get the negative out of the way first. The first quarter was riddled with issues. It was great to see Ben Roethlisberger take his first hit and throw his first pass. However, the very first thing we saw from this offense was ineptitude. James Conner couldn’t gain any yardage, the Steelers came out with the typical “Randyland” Run, Run, Pass offense with an uninspiring 3 & out.

Outside of the occasional completed pass, the first quarter was atrocious. For the media-driven hype about this offense during training camp, I was very disappointed early on. Fans witnessed a game where the offensive line struggled, Roethlisberger held the ball too long, and the Steelers lacked a run game in the early portions of the contest. Despite the success by Benny Snell Jr., the fumble could have been devastating. Diontae Johnson also looked out of sorts early. The first two and a half quarters of play calling was a horror show. On top of a poor first half, in the 3rd quarter, there didn’t seem to be any offensive adjustments.

Now the good. As the rust came off, JuJu Smith-Schuster, Roethlisberger, Snell, and others started to wake up. Chase Claypool had a great sideline catch, Smith-Schuster had a couple of touchdown passes and a heads up fumble recovery and James Washington might have actually had the most impressive touchdown catch of anyone in this game. Washington fought for every extra yard he needed through two potential tacklers to score a huge touchdown. Smith-Schuster caught everything passed his way. Snell, when finally given the reigns, really turned it on in this game with some huge runs. Eric Ebron had a very nice catch and run, and Roethlisberger had a good run himself. Zach Banner did admirable early at right tackle despite some issues on the offensive line.

Ben Roethlisberger: A-
For the first game in a year, his play was admirable.

Benny Snell: B+
Can’t be putting the ball on the ground.

James Conner: F
Not only was he not productive, he didn’t even make it though the first week without being injured.

Juju Smith-Schuster: A+
He is Back!

James Washington:
A if he had only had that 1 catch for a TD that would’ve been enough.

Diontae Johnson: B-
The beginning of this game was a nightmare. He calmed down and became productive.

Receivers (including TEs): A-
Overall very good, but still room for improvement.

Offensive Line: C+
This was a rough night for the line when it came to protecting Roethlisberger, although the quarterback was responsible for at least one sack. However in the fourth quarter the run blocking improved greatly.

When the dust settled, the Steelers got the win, but there is a lot of room for improvement. Having said that, we got to see glimpses of where this team could be great as the season progresses and perhaps only Randy Fichtner can hold them back.

What grade would you give the offense? Let us know in the poll below:

I am in no way suggesting there isn’t room for improvement with the defense, having said that, while the sack numbers weren’t really there this defense was flying all over the place.

The one thing I didn’t like defensively is the soft zone coverage where the unit kept giving up chunk yardage to Giants’ receivers. Terrell Edmunds had a mediocre game, yes he had a lot of tackles, but he also had several missed tackles including one on the big Saquon Barkley catch and run. Vince Williams came to play, that punishing sack on Jones injected a lot of juice into the defense. The secondary, despite the soft coverage, played well. I don’t care about the touchdown Steven Nelson gave up because it never should have happened. The Defensive Pass Interference call on Joe Haden prior to that play could not have been more bogus.

The other touchdown late was the result of Prevent Defense.

Turnovers, how about T.J. Watt and Cam Heyward?! Both excellent plays and the Heyward interception was a result of the continued great play of Bud Dupree. Devin Bush did a great job on Barkley throughout the game. The fact Saquon Barkley had next to nothing on the ground was a victory in this game for the defense. In fact, prior to this game a couple members of the BTSC team suggested the key to victory was exactly that, limiting Saquon; yes I’m looking at you Michael Beck and Geoffrey Benedict.

While Minkah Fitzpatrick had a quiet game, he did exactly what he needed to do. Daniel Jones simply stuck with passes away from Fitzpatrick in this game, Many of their completions were underneath, or near Edmunds. The defense, even from the start of the game, appeared to be continuing where they left off last season. Fans saw some big plays in the passing game by the Giants, but that was the only way the New York offense was even able to move the ball. The Steelers’ defensive line dominated the Giants’ offensive line in the run game and created turnovers by way of pressure. Limiting the passing game moving forward seems to be the primary area where the defense can improve, and you have to assume the defense will start getting to the quarterback sooner, rather than later.

What grade would you give the Steelers defense? Let us know in the poll below:

The Steelers’ special teams started off with what was an extremely bone-headed fumble by Diontae Johnson. He followed that up with an awkward fall to the ground on the next punt return, and later another weird in-traffic fair catch. Chris Boswell missed a PAT that, while annoying, wasn’t as bad as the kickoff out of bounds which shouldn’t happen. Newcomer Dustin Colquitt isn’t a booming punter, so some made a lot out of the less than 40 yard punt average in this game. Where Colquitt thrives is hit ability to kick high and limit returns. The issue Monday was Jabrill Peppers isn’t a guy that typically calls for a fair catch and the first guy was consistently missing tackles on kick teams. The special teams overall had a mediocre day. It could have been worse, but it has to be better moving forward.

What grade would you give the Steelers’ special teams? Let us know by voting in the poll below:

Mike Tomlin: A
I don’t feel the Steelers were playing down to anyone. I think Daniel Jones performed better than anyone expected, and the defense didn’t get to the quarterback consistently. The timeout near the end of the first half before getting the ball back was a little confusing, but ultimately didn’t matter.

The one thing that keeps me from giving Tomlin an A+ is the decision not to have your full 48 allowed active players. It simply doesn’t make any sense.

Randy Fichtner: F
The defense bailed him out of his terrible play calling. The defense, and the simple fact the Steelers have a lot of offensive talent. The run, run, pass telegraphed offense and calling awkward flat passing plays on 3rd & 1 instead of running it up the gut with Snell as just a few examples. It seems the Steelers won this game despite of Fichtner.

Keith Butler: C
I would be willing to give him a better grade if not for the soft zone the defense ran a large majority of the game. Thankfully, the Steelers have enough talent to make plays when it matters most. Also, in the fourth quarter, Dupree could have dialed down the blitz a bit. It’s easy to give him a pass because Bud Dupree helped force a Heyward turnover, but the fact is Jones used the defensive aggression against them for much of that drive, and Butler did not adjust.

Danny Smith: C
I hold Smith responsible for not making a change to the Punt Return situation.

How would you grade the coaching staff in Week 1? Let us know by voting in the poll below:

In closing, this was a sloppy win, but one that follows an offseason unlike the NFL has ever seen. There is a lot of room for improvement, but it was great to see the band back together again. The ability to create turnovers and fight through adversity is there. There was enough optimism in this game to build on.

Now the team must prepare for Denver Broncos.