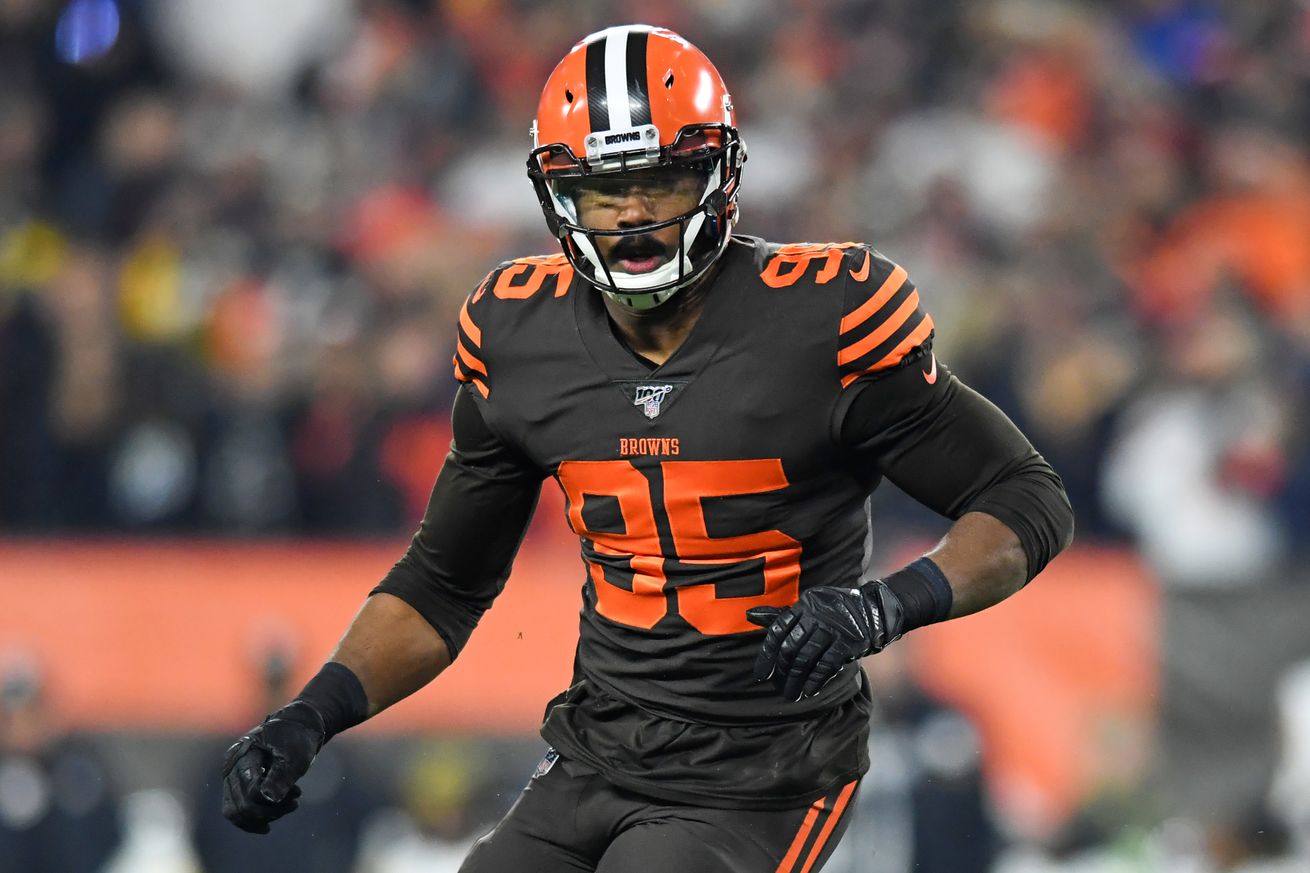 The Pittsburgh Steelers will have their hands full with Myles Garrett on Sunday.

This week, we are previewing the contest between the Cleveland Browns (4-1) and the Pittsburgh Steelers (4-0) on Sunday at Heinz Field. The Browns won their fourth in a row last week, defeating the Indianapolis Colts 32-23 while the Steelers remained undefeated with a 38-29 victory over the Philadelphia Eagles.

Before we do that, let’s review our keys to victory from last week’s game against the Eagles:

The pressure part worked, as the Steelers recorded five sacks to maintain an absurd pace that has them on target for 80 sacks this season. They were not as successful defending the passing game, as the Eagles threw for 282 yards. Much of that went to the previously obscure Travis Fulgham, who caught 10 balls for 152 yards. The pass defense may have seemed worse than it was, as Pittsburgh backed off into a soft zone once they took a 31-14 lead midway through the third quarter. It has raised some concerns among the fan base, however, and with an explosive Cleveland offense on tap, those concerns will be put to the test.

Philadelphia led the league in total sacks coming into the game with 17. But they got to Roethlisberger just once, resulting in an efficient 27-34, 239, 3/0 afternoon for the Steelers’ signal-caller. Roethlisberger now has 10 touchdown passes against just one interception this season and is completing 70% of his throws while having been sacked just six times overall. With an embarrassment of riches at the skill positions, the 38 year-old Roethlisberger seems bound for a huge comeback year if the offensive line can keep him reasonably clean.

Even the most optimistic, homeristic, Yinzer-istic fan would have had a hard time projecting the Steelers to be 4-0 at the quarter-pole of the season. Yet here they are, one of just four unbeaten teams remaining in the league. Equally surprising is the status of their opponent this week. No one denies that the Cleveland Browns have the talent to be successful. But after years of mismanaging that talent, and after a potentially-demoralizing start to a season that began with a 38-6 drubbing at the hands of the Baltimore Ravens, few would have expected Cleveland to be 4-1.

The Browns have been building the current team for years. Over the last four seasons, they’ve made eleven first and second round draft selections while retaining enough cap space to sign a slew of free agents. Fortunately for Steelers’ fans, their pu-pu platter of head coaches over the past decade — Pat Shurmer, Rob Chudzinski, Mike Pettine, Hue Jackson, Greg Williams and Freddie Kitchens — directed the team to a cumulative won-loss record of 37-106-1. Few moments better encapsulated the 2010-2019 Browns than a scene from HBO’s “Hard Knocks” when it profiled Cleveland a few summers ago. An exasperated Todd Haley, who was briefly Cleveland’s offensive coordinator after leaving Pittsburgh in 2017, butted heads with Jackson over the culture of the team in a meeting that revealed the division and dysfunction within the organization (for pure schadenfreude, click here). In short, the Browns were the laughing-stock of the league.

That may all be changing. New head coach Kevin Stefanski has been praised for bringing much-needed leadership to Cleveland while quarterback Baker Mayfield, when not making annoying commercials for an insurance company, has revved up an offense averaging 37.5 points per game the past four weeks.

Cleveland’s defense, meanwhile, while not on par with its offensive counterpart, has been serviceable. The Browns rank 10th in the league in run DVOA and lead the league with twelve total takeaways. They have surrendered a lot of points (149 to be exact, which is sixth-worst in the league) but their high-scoring offense and opportunistic defense has bailed them out when necessary.

What can we expect, then, when Cleveland comes to PIttsburgh on Sunday in a critical AFC North showdown? Here are the keys to victory for the Steelers.

Through five games this season, Mayfield has completed 93-152 passes (61.2%) for 976 yards with 9 touchdowns and 4 interceptions. Those numbers are decent but not spectacular (Ben Roethlisberger, by comparison, is 100-143, 69.9%, 1016 yds, 10/1 through four games). Where Mayfield has excelled, however, is in the play-action passing game. Mayfield’s overall quarterback rating is 88.6. On play-action attempts, it jumps to 106.2. Mayfield had the third-most touchdown passes in the league off of play-action in 2019, and Stefanski, who earned a reputation as a play-action guru while the offensive coordinator in Minnesota, has taken advantage.

The Browns typically use two types of play-action. The first involves a run fake where Mayfield flashes the ball to a back and then sets up in the pocket. This action is usually designed to get second-level defenders to press the line of scrimmage. It then pairs deep routes that stretch the safeties with crossing routes to exploit the void the run fake has created.

Here, against Indianapolis last week, the Colts’ linebackers don’t really bite on the fake, but it does hold them long enough to create space for receiver Jarvis Landry (80). A delay from the tight end, who blocks and then releases into the left flat, provides a high-low read for Mayfield on the flat defender. The defender hangs with the tight end so Mayfield takes the high route behind him:

Cleveland also utilizes bootleg play-action that capitalizes on Mayfield’s athleticism by getting him out of the pocket. In the photo below, we see a 21 personnel formation with a fullback off-set to Mayfield’s right. The fullback, tailback and offensive line will all flow to the right while Mayfield will fake and then boot away to his left. Meanwhile, Landry, who is circled in the photo, will run an “Over” route, crossing behind the linebackers from one side of the field to the other:

Indy is in man coverage here, which makes crossing routes, where the receiver is running away from the leverage of the defender, especially difficult to cover. Mayfield executes the bootleg well, getting plenty of depth to move away from the pass rush, then pivots to throw back to Landry. The play design has the defense scrambling to reclaim sound position and Mayfield makes a great throw for a big gain:

The Browns pair their play-action passing game with the league’s best rushing attack. Cleveland is currently averaging 188 yards rushing per game. The Steelers’ defense, meanwhile, is second-best in the league at defending the run, yielding just 64 yards per game. An offense doesn’t necessarily have to run the ball well to set up the play-action pass, but if Cleveland can establish a strong run game early it will likely force the Steelers’ to get aggressive in the box with their linebackers and safeties, opening up some of the play-action opportunities on which Cleveland has feasted this season.

I would expect the Steelers to play a good amount of 3-4 versus Cleveland, hoping to stop the run with their front seven and to put Cleveland behind the chains, where play-action passes are less effective (defenses are less likely to “buy” run fakes on 2nd and 9 than on 2nd and 5). If Cleveland can keep the Steelers off-balance by mixing the play-action pass with the run early on, especially on 1st down, things could get challenging for the Pittsburgh defense.

In case you’ve forgotten, this is the first time the Steelers will face defensive end Myles Garrett since the, uh, “incident” last November:

Garrett was suspended for the remainder of the 2019 season. He has returned with a vengeance in 2020. At present, Garrett is second in the league in sacks (6) and tied for first in forced fumbles (3). He has been the most disruptive player on a Browns defense that, as noted previously, leads the NFL in takeaways and has been opportunistic when necessary.

Garrett is predominantly a speed rusher, as we see in the GIF below. He is aligned at right defensive end and uses a T.J. Watt-style dip-and-rip move to bend the edge for a strip-sack against Washington:

The speed rush is not the only move in Garrett’s repertoire. In the contest at Dallas two weeks ago, Garrett (at left DE) tried to cross the face of offensive tackle Cody Wichmann (78). Wichmann redirected to cut Garrett off but, if you look carefully below, you can see him come unbalanced as he did and get his weight too far forward. That slight error in technique gave Garrett an opening to spin back to the outside. The quick spin move seemed to catch quarterback Dak Prescott, who had slid wide when Garrett ducked inside, by surprise. Garrett swooped in and swallowed up Prescott for the sack:

The Steelers did a solid job against Garrett in last November’s contest, limiting him to one tackle and no sacks. In 2018, he recorded three sacks in his two games against Pittsburgh. One, however, was a coverage sack where Roethlisberger held the ball too long in the pocket. Another was a failed RPO where a bad snap led to bungled execution and a missed block on Garrett. All things considered, the Steelers’ line has largely held their own against him.

Will Sunday be different? To say Garrett may be motivated for the contest feels like an understatement. His comments following the Mason Rudolph fiasco indicate he felt he was the victim in the altercation. It wouldn’t be surprising if he sought to balance the scales of justice this week. He’s playing at a high enough level as is — on one snap against Indianapolis last week, the Colts had three players assigned to block him; on most others, they kept a back or tight end in to help in protection. Extra motivation, then, may render him un-blockable.

Emotion is said to be the enemy of reason, however, so if the Steelers can play fundamentally-sound, unemotional football they may be able to take advantage of Garrett’s state-of-mind. Garrett has been prone to personal foul penalties and lapses in judgment in the past. If I were Mike Tomlin, I’d urge the offensive line to play a disciplined football game and let Garrett bear the burden of heightened emotions.

Whatever transpires between Garrett and the Steelers, it should be an exciting football game at Heinz Field on Sunday. The 4-0 Steelers against the 4-1 Browns for first place in the AFC North. Who in the name of Brian Sipe saw this coming?