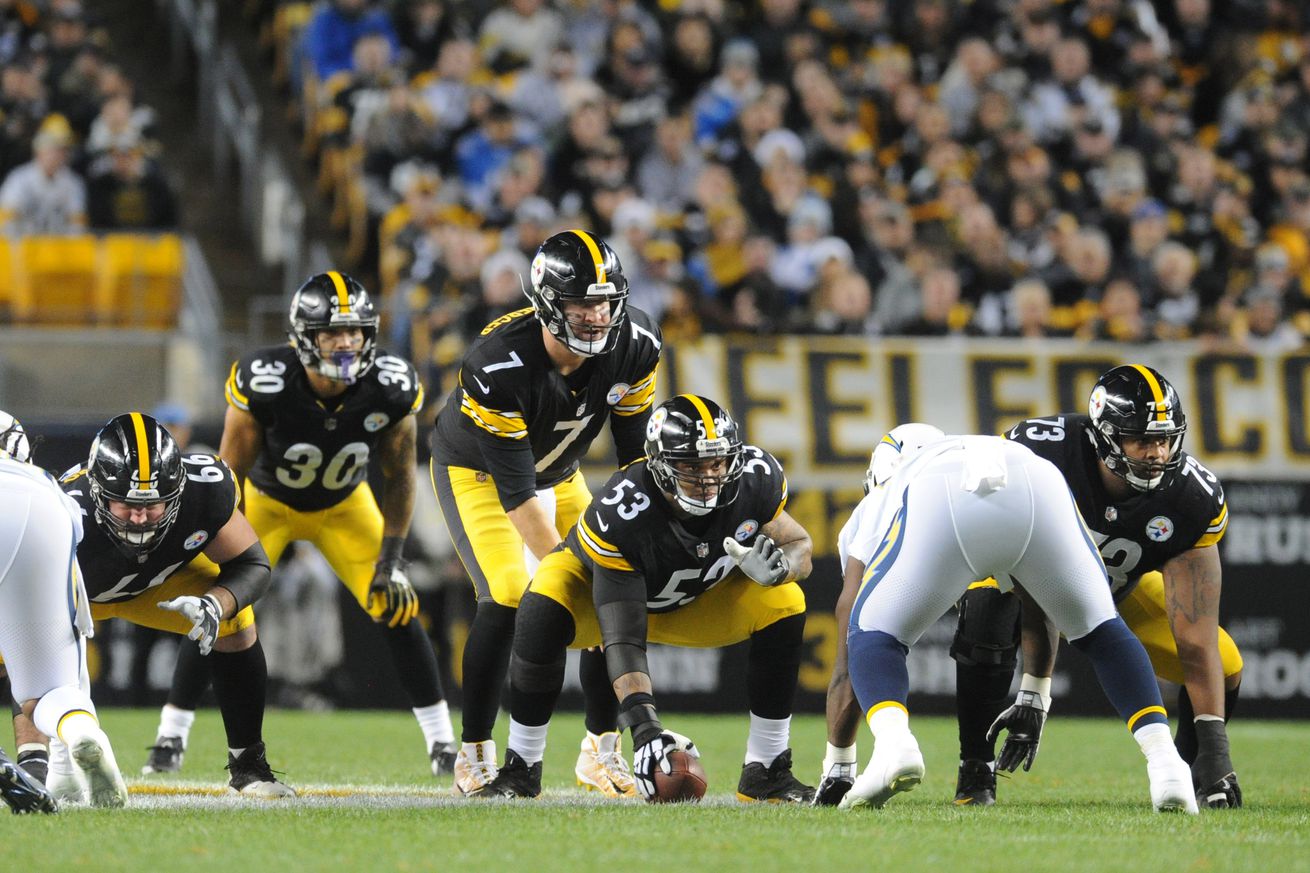 The Pittsburgh Steelers will have to protect Ben Roethlisberger if they want to stay perfect in Week 5.

This week we are previewing Sunday’s game between the Pittsburgh Steelers (3-0) and the Philadelphia Eagles (1-2-1) at Heinz Field in Pittsburgh. The Steelers were off last week after their game with the Tennessee Titans was postponed due to Tennessee’s COVID outbreak. The Eagles notched their first win of the season when they defeated the 49ers 25-20 on the road in San Francisco.

Until recently, the Eagles were among a handful of franchises that had been around since the dawn of the Super Bowl era never to hoist the Lombardi Trophy. Eagles’ fans were a predictably cynical bunch, hesitant to get their hopes up and quick to voice their displeasure. Then, in 2017, the Birds put together an unexpected post-season run behind backup quarterback Nick Foles to topple the mighty New England Patriots in Super Bowl 52. The subsequent parade was a regional holiday, with area schools closing so their students could attend. It was a borderline religious experience for the locals.

It has been said that a Super Bowl victory buys a franchise a decade of good-will from its fans. In Philly, that decade aged in dog years. Just three seasons removed, the good-will is largely gone. I live in South Jersey, where the majority of football fans root for the Eagles. As I was working on this article, I texted several of my friends who are Eagles fans and asked for their thoughts on the franchise these days. Here is a sampling of the responses:

“I am one more Wentz interception from watching cornhole on Sundays.”

That last comment is particularly telling. Not the cornhole part, which ESPN actually televises for some reason, but the remark about quarterback Carson Wentz. Wentz was as beloved as a player could be his first two seasons in Philly. He was dynamic, athletic, had a big arm and his teammates seemed to revere him. After a promising rookie season, he emerged as an MVP candidate in 2017 as the Birds raced to an 11-2 start. But Wentz’s season ended when he wrecked his knee diving into the end zone on a play in Dallas in week fourteen. Foles took over, ran the table and became a Philly legend.

Wentz has not been the same since the injury. He seems less decisive in the pocket, displays happy feet as the rush closes in and is often inaccurate. Throws like this one on the third play from scrimmage last week at San Francisco have Eagles fans pining for Foles or for second round pick (and BTSC draft crush) Jalen Hurts. With a passer rating that has fallen from 102 in 2018 to 91 in 2019 to the mid-60s this season, and a current touchdown-to-interception ratio of 4:7, those calls may not be as irrational as they seem.

Wentz was better last week against San Francisco but it will do little to silence the critics if he struggles in Pittsburgh. Eagles’ fans are on a week-to-week relationship with their quarterback, which is often a tenuous situation.

Defensively, the Eagles are stout up front with veterans Fletcher Cox, Brandon Graham, Malik Jackson and former Steeler Javon Hargrave. Their secondary, however, has undergone great turnover the past few seasons. They played at San Francisco with a back-end manned by Rodney McLeod, Marcus Epps, Cre’von LeBlanc, Rudy Ford and Darius Slay. Slay is a nice player and a name you may recognize. The other four sound like members of an Earth, Wind and Fire cover band. With Jimmy Garoppolo out, Philly’s secondary benefited from playing a Nick Mullens-C.J. Beathard quarterback combo in San Francisco. They will get a much stiffer test from Ben Roethliberger on Sunday.

Despite the quarterback drama and the roster upheaval, the Eagles, in a dismal NFC East, somehow lead the division at 1-2-1. They are well-coached under Doug Pederson and have a lot to play for on Sunday. It is likely to be a close, hard-fought contest. Here, then, are the Steelers’ keys to victory:

In my ill-fated scouting report for last week’s game against Tennessee, I listed defending the tight ends as one of the Steelers’ keys to victory. The same is true this week, with the added caveat that the Eagles will throw heavily to their backs.

Philly targets their backs and tight ends out of both preference and necessity. As for the latter, they were without regular receivers Alshon Jeffery, DeSean Jackson and promising rookie Jalen Reagor (another BTSC draft crush) against San Francisco. Reagor is on injured reserve and Jackson and Jeffery questionable to return against Pittsburgh. Philly’s receiving corps versus the 49ers consisted of Greg Ward Jr, Travis Fulgham and John Hightower, a group so obscure they make the Eagles’ defensive backs seem like household names.

Fulgham caught the decisive touchdown pass in San Francisco as the receivers tallied eight receptions overall. Still, the Eagles’ passing scheme revolves around versatile tight end Zach Ertz and running backs Miles Sanders, Corey Clement and Boston Scott. They run a host of swing routes, crossing routes, wheels, screens, delays and anything else you can think of from the short and intermediate route tree.

Ertz, especially, is a gifted receiver who presents the sort of match-up problem that gives defenses fits. At 6’5-250 pounds, he has the speed to beat linebackers and the size to shrug off most safeties and nickel corners. Sanders, meanwhile, caught 50 balls as a rookie and, though not as powerful, is reminiscent of his former Penn State teammate, the Giants’ Saquon Barkley.

Wentz’s reliance on his backs and tight ends has turned him into a dink-and-dunk passer. Entering the San Francisco game, he was 33rd in the NFL among qualifying quarterbacks with 5.6 yards per attempt. He was also 29th in pocket time, meaning the time between the snap and applied pressure from the defense. Wentz is often forced to throw short because, in addition to the dearth of deep-threats on the Eagles’ current roster, he has no time in the pocket to allow down-field routes to develop. Long-time offensive tackle Jason Peters was placed on injured reserve last week and replaced by a former professional rugby player, Jordan Mailata. The 49ers took advantage, sacking Wentz three times and pressuring him constantly.

Wentz may also rely on the short passing game because he’s having trouble reading defenses. He played in a 22-personnel offense at North Dakota State that overwhelmed its opponents with the power run game and did not emphasize advanced passing concepts. It’s possible that, after the success of his first two seasons, defenses have discovered the weaknesses in Wentz’s game and are exploiting them.

Take this play from last week. San Francisco brings a slot blitz on a 3rd and 8 play in the fourth quarter. It’s a pretty good blitz disguise from the 49ers, as there are three defenders stacked over the three Philly receivers to the bottom of the formation in what looks like classic man-free coverage with a single-high safety:

The stance of the slot corner, and the fact his eyes are on Wentz and not on the receiver in front of him, are pretty good indicators he’s blitzing, however. The safety (circled) will pick up the vertical while a linebacker will fall off to grab one of the in-cuts. Wentz should see the slot corner coming and throw immediately to the second in-cut from receiver John Hightower (82). This will put the onus on the San Francisco corner to make a sound open-field tackle to prevent a first down.

Instead, Wentz seems confused by the stunt, is slow to react and winds up eating the ball for a sack:

Plays like this have been all too common in Philly recently and have fueled speculation that Wentz, while remaining dangerous on the move or once he escapes the rush and can improvise, simply isn’t good enough at reading defenses to be a proficient pocket passer.

Then again, Wentz may not be the problem. Wentz has already played with twenty different receivers in his four-plus seasons. Ten of them are no longer in the league, while several he played with last week seem destined for brief careers. His top two receivers this season, Jackson and Jeffery, can’t stay healthy. Jackson has missed sixteen of his last twenty games while Jeffery has missed ten of twenty. It has been impossible for Wentz to develop any sort of rapport with a receiving corps that revolves like a merry-go-round.

Look for Pittsburgh to play a good deal of 2-4-5 against Philadelphia, with safety Terrell Edmunds drawing Ertz in coverage (Geoffrey Benedict chronicled Edmunds’ success against athletic tight ends here). The Steelers are also likely to disguise their coverages and bring an array of blitzes at Wentz in an effort to confuse him. If Pittsburgh can contain Ertz and the running backs in the passing game, and apply pressure to Wentz while he’s in the pocket, it will greatly limit the effectiveness of the Eagles’ offense.

While the Steelers remain atop the league in sacks-per-game at 5.0, the Eagles lead in total sacks with seventeen. Pittsburgh has brought an incredible amount of pressure at opposing quarterbacks in their first three games, blitzing on a league-leading 51% of their snaps. Philadelphia is just 22nd in blitz percentage, at 19%. The Eagles’ sack numbers are a reflection of the pressure they’ve been able to generate with their aforementioned front four, which, in addition to Cox, Graham, Jackson and Hargrave, includes edge rushers Josh Sweat and Derek Barnett. Sweat and Graham lead the team with three sacks apiece while Barnett has 2.5. The defensive line has accounted for fourteen of Philly’s seventeen sacks overall.

The Eagles are surviving with their no-name secondary in large part because the pressure from their front four allows them to drop seven in coverage and clog up passing lanes. Pittsburgh saw this approach a few weeks ago from Denver’s zone-heavy scheme. Ben Roethlisberger was an efficient 29-41 for 311 yards against the Broncos and was sacked just once. While a repeat of that performance on Sunday would be nice, Philadelphia’s front four is far more accomplished at rushing the quarterback.

As you can see below, the Eagles’ line does a great job pushing the pocket. Graham (55) and Barnett (RDE) use their hands well to win inside leverage on San Francisco’s tackles. Cox and Hargrave, meanwhile, compress the pocket with bull-rushes of their own, leading to a gathering at the quarterback.

Watch how aggressively the Eagles’ underneath defenders attack San Francisco’s shallow routes. They can play this way because they have confidence the pass rush will get home before they can be stretched vertically or double-moved. For the Steelers to find success in the passing game, they will have to be strong up front against an Eagles line that is not big on finesse but looks to overpower blockers en route to the quarterback. If they can do so, their receivers should have success against a Philly secondary that is yielding opposing quarterbacks a 68.0 completion percentage and seven touchdowns against just two interceptions.

Steelers’ fans who are inclined to overlook the Eagles because of their slow start are making a mistake. Philadelphia routed Pittsburgh 34-3 in their last meeting in 2016 and, while that result will have little bearing on Sunday’s contest, it underscores how the Eagles tend to play with a chip on their shoulder against their more accomplished cross-state rival. The Steelers need this game to protect their lead in an AFC North that contains a pair of 3-1 teams in the Baltimore Ravens and Cleveland Browns. Finding ways to keep Ben Roethlisberger clean on offense, and to pressure Wentz while covering up Philly’s quick passing game on defense, will go a long way towards achieving that goal.