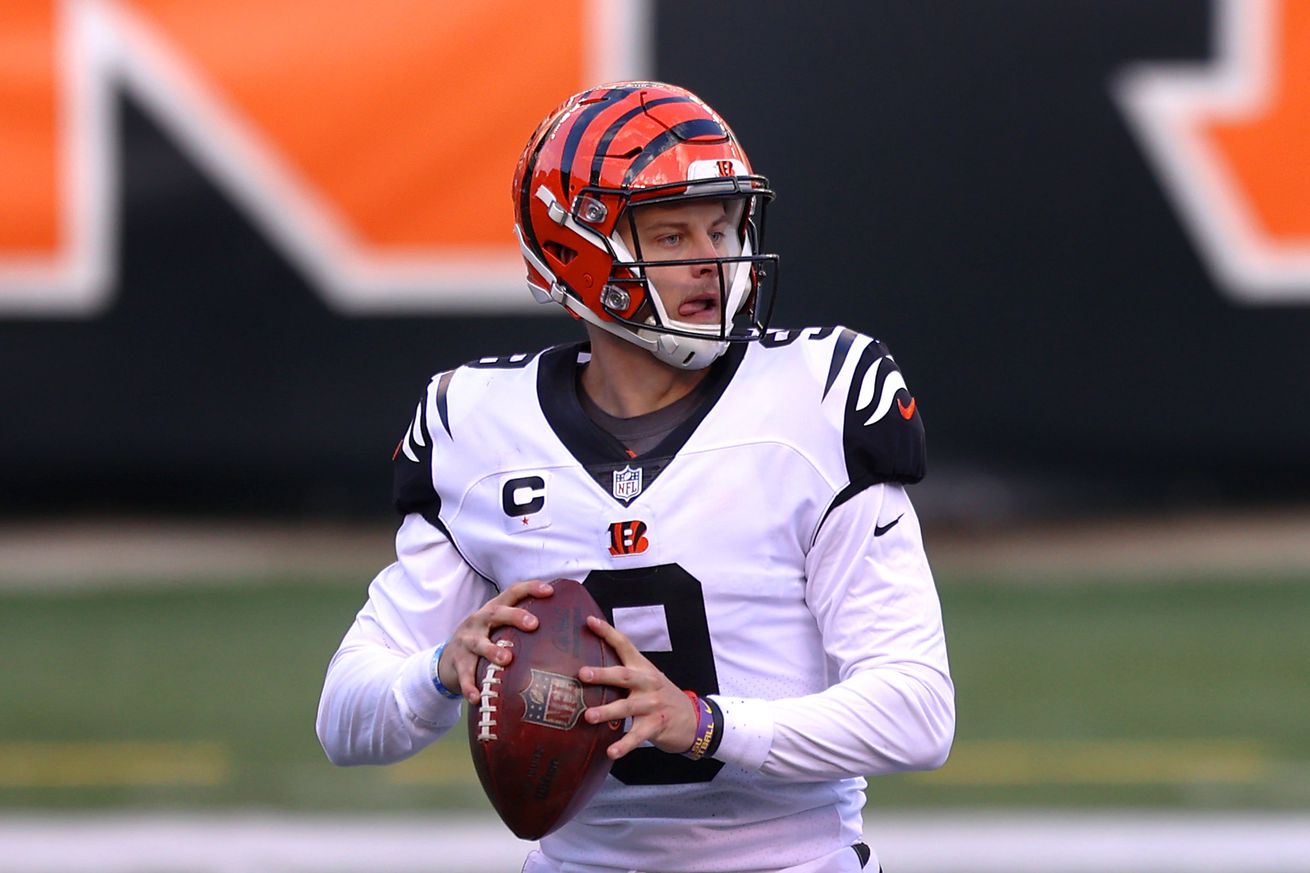 The Pittsburgh Steelers and Cincinnati Bengals will square off in Week 10 at Heinz Field, and this matchup is all about the quarterbacks.

This week we are previewing the game between the Pittsburgh Steelers (8-0) and the Cincinnati Bengals (2-5-1) at Heinz Field. The Steelers eked out a 24-19 win over the Dallas Cowboys last week to complete their first 8-0 start in franchise history. The Bengals were on their bye week. In Cincinnati’s last outing, they upset the Tennessee Titans 31-20.

Pittsburgh’s struggle in Dallas can be seen one of two ways. It can either be forgiven as the natural product of a letdown against a bad team at the end of a three-game road trip after three straight games (Cleveland, Tennessee and Baltimore) that either determined the lead in the AFC North or the conference in general.

Or… it can be seen as a harbinger of trouble. The Steelers gave up 364 yards to an offense led by Garrett Gilbert, who was last seen piloting the Orlando Apollos of the doomed Alliance of American Football (the “Aaaa-hf”). For the third week in a row, they played unevenly. They blew a big lead and held on in Tennessee. In Baltimore and Dallas, they played feckless first halves and had to come roaring back. All three games were not decided until the final play. Eventually, the Steelers’ failure to play sixty solid minutes, and their trend of taking games to the wire, seems destined to betray them.

So, are the 8-0 Steelers an elite team worthy of their unblemished record or are they a flawed team tenuously masking their deficiencies? At times, they have been both. While this gives us little indication of what to expect of them moving forward, in the year 2020, when the unanticipated has become routine, that seems fitting.

The next obstacle in Pittsburgh’s uncertain path is the Cincinnati Bengals. The Bengals are unquestionably a flawed team. Their pass defense is bad. Their run defense is atrocious. They’ve registered just 11 sacks in eight games. Their rushing attack is middling. And yet, there is great optimism in the Queen City these days, all of which centers on top draft pick Joe Burrow. In just eight games, Burrow has cemented himself as Cincinnati’s quarterback of the future. He’s thrown for almost 2,300 yards, including a 406 yard performance in the Bengals’ 37-34 shootout loss to Cleveland in week seven. In Cincinnati’s last outing, Burrow was an efficient 26-37 for 249 yards with two touchdowns and no interceptions as the Bengals upset the Titans. Burrow looks like a veteran already and has emerged as a favorite to win the league’s Offensive Rookie of the Year award.

The Steelers are heavily-favored in this match-up (they opened in Vegas at -9.5) but, given last week’s result, cannot take anything for granted. Containing Burrow will be a top priority but will not be the only thing they will have to do to win on Sunday. Here’s a closer look at what it will take for the Steelers to defeat the Bengals and get to 9-0.

The Steelers’ best offense the past two weeks has been when they’ve gone to a 01 personnel grouping (0 backs, 1 tight end, 4 receivers) and had Ben Roethlisberger call plays at the line of scrimmage. Against Baltimore, they completed an eight-play, 80-yard drive from this grouping late in the fourth quarter to score what turned out to be the game-winning touchdown. Against Dallas, they turned a similar trick, moving 79 yards in six plays for the decisive fourth-quarter score. That’s 159 yards in 14 plays for an average of 11.3 yards-per-play. It’s a small sample size but an impressive one nonetheless.

The problem is the rest of the offense. Minus the improvisational 01 package, the Steelers ran 99 plays against Baltimore and Dallas for 417 total yards. That’s a pedestrian 4.2 yards per play. Their rushing attack has been especially ineffective, accounting for just 94 yards on 34 carries (2.7 ypp). Nothing epitomized their struggles in the run game better than a two-play sequence early in the second quarter versus Dallas.

On a 3rd and 1 from the +35 yard line, the Steelers aligned in a traditional 2×2 set with tight end Eric Ebron on the line to the right of the formation. They ran a simple inside zone play. Curiously, rookie Anthony McFarland, all 5’8-205 of him, was the running back on the play. McFarland took the hand-off and had a great opportunity to make a jump-cut into a big hole to his left for what would have been a first down. You can see the hole in the image below:

However, in his eagerness to get downhill, McFarland blew right past the cut. That mistake was compounded when right guard David DeCastro got beat across his face by Dallas’ pinching 3-tech and center Maurkice Pouncey was late chipping off of his double team on the 1-tech. This allowed linebacker Leighton Vander Esch (55) to come through unblocked. Vander Esch stoned McFarland for no gain:

On 4th and 1, the Steelers stayed in 11 personnel but replaced Ebron with Vance McDonald and McFarland with Benny Snell Jr. Here, however, right tackle Chuks Okorafor gave up penetration to a pinching lineman and left guard Matt Feiler could not sustain his block. Snell ran into a wall of white jerseys and the Steelers were turned away.

These two plays underscore some of the problems the Steelers have had the last two weeks in their base offense. Granted, had McFarland cut to his left, the 3rd and 1 would have succeeded. That doesn’t eliminate the fact that four different offensive linemen got beat or failed to execute properly on these two downs. When the Steelers line up in traditional looks and declare their intentions, or when they are predictable by down-and-distance or by formation, they often struggle to execute. They are not, to be blunt, an “impose-your-will” kind of offense.

Once it became obvious they could not move the ball on the ground against Dallas, they abandoned the run game. From midway through the second quarter until their final drive, they threw on 36 of 37 offensive plays. That’s right: 36 passes, 1 run. The results were positive as they scored all 24 of their points in that span. This week, with the league’s 29th-ranked run defense coming to town, the Steelers may be tempted to pound the ball inside in an attempt to get the run game back on track. This approach did not work in Dallas and will probably not work against Cincinnati. They are simply better when they spread defenses out and challenge them horizontally with crossing routes, sweep plays and quick perimeter throws. These spread sets force defenses to simplify their looks and allow Roethlisberger to take what is presented.

Case in point: On the game-winning touchdown pass to Ebron with just over two minutes remaining on Sunday, Roethlisberger recognized man-coverage against Pittsburgh’s empty formation. Linebacker Jaylen Smith (circled below) was assigned to Ebron, who was the #3 receiver in the trips look to Roethlisberger’s left. Roethlisberger made a simple site adjustment at the line, calling for hitch routes from his two outside receivers that would run their defenders off, and sent Ebron on a quick out away from Smith’s leverage. The result was an easy pitch-and-catch (punctuated by Ebron hurdling a Dallas defender into the end zone) that put the Steelers ahead for good.

Fully entrusting the offense to Roethlisberger is a dangerous proposition. He’s 38, surgically-repaired and got dinged up in Dallas. Mason Rudolph looked like a JV quarterback by comparison when Roethlisberger exited briefly just before the half. But their base offense is far less dynamic than Roethlisberger’s improv routine. While some structure will always be necessary, for now, discarding the play script and letting Roethlisberger engineer the offense is their best bet.

The most disappointing element of the defensive game-plan in Dallas was how infrequently the Steelers blitzed journeyman quarterback Garrett Gilbert. With 7:11 remaining in the fourth quarter, CBS showed a graphic that revealed Gilbert had gone 12-15 for 126 yards and a touchdown when the Steelers did not blitz him. When they did, he’d gone 3-9 for 34 yards with an interception. The Steelers blitzed Gilbert aggressively over those final seven minutes and he went 6-14 for 83 yards in that span, leaving him just 9-23 for 117 yards against the blitz overall.

Why did they wait so long to pressure Gilbert? Why did they hang back in their base 3-4 defense and let Dallas shift and motion their way into favorable matchups with their receivers against the Steelers’ linebackers? Anyone from Garrett Gilbert to Gilbert and Sullivan could have looked proficient sitting in a clean pocket throwing to CeeDee Lamb against T.J. Watt, which occurred on Dallas’s second quarter touchdown. We’ve seen that recipe before from a Keith Butler defense. It often ends in disaster.

The Steelers were fortunate to get away with it in Dallas. Against Joe Burrow, they may not be so lucky. Entering the Baltimore game a few weeks back, Burrow was fourth in the NFL when kept clean in the pocket, a statistic that suggests he is already pretty good at diagnosing zone coverage and throwing accurately into open windows. Undoubtedly aware of this, Baltimore opted to pressure Burrow. They blitzed him relentlessly and forced him into his worst day as a pro. Cincinnati was routed 27-3 while Burrow went 19-30 for 183 yards with no touchdowns and an interception. The pressure kept Burrow from getting comfortable and disoriented him into taking seven sacks and, well, looking like a rookie:

Conversely, Tennessee chose to sit back in a two-high shell and rush four at Burrow (much like they did against Ben Roethlisberger when Pittsburgh visited Nashville a few weeks ago). To quote the late Hank Stram, Burrow effectively “matriculated the ball down the field” with the short and intermediate pass, throwing accurately into the windows in Tennessee’s zones:

Burrow also demonstrated great pocket awareness in that Tennessee game, understanding how to move his feet and find space while keeping his eyes down the field. Watch him below as he slides away from the pass rush and then, rather than continue to bail, re-sets the pocket, allowing him to step in to his throw. His composure and ability to extend plays is reminiscent of a young Roethlisberger. It will take more than three or four rushers to make him uncomfortable.

For Pittsburgh, that means returning to the aggressive formula they displayed throughout much of the first eight weeks of the season. Last week, they played a good deal of base 3-4 because they were worried about Ezekiel Elliott and the Cowboys rushing attack. Cincinnati ranks 24th in the league at just over 100 rushing yards per game. The base 3-4 may not be necessary to stop the run on Sunday, allowing the Steelers to get more exotic with their personnel packages and subsequent pressure schemes. The more they throw at Burrow the better. He is already too good to defend with vanilla looks and moderate pressure.

Is 9-0 in the cards for the 2020 Pittsburgh Steelers? In this strange and uncertain year, it’s hard to say. But giving Ben Roethlisberger the keys to the offense and suffocating Joe Burrow with pressure feels like the hand they should play.