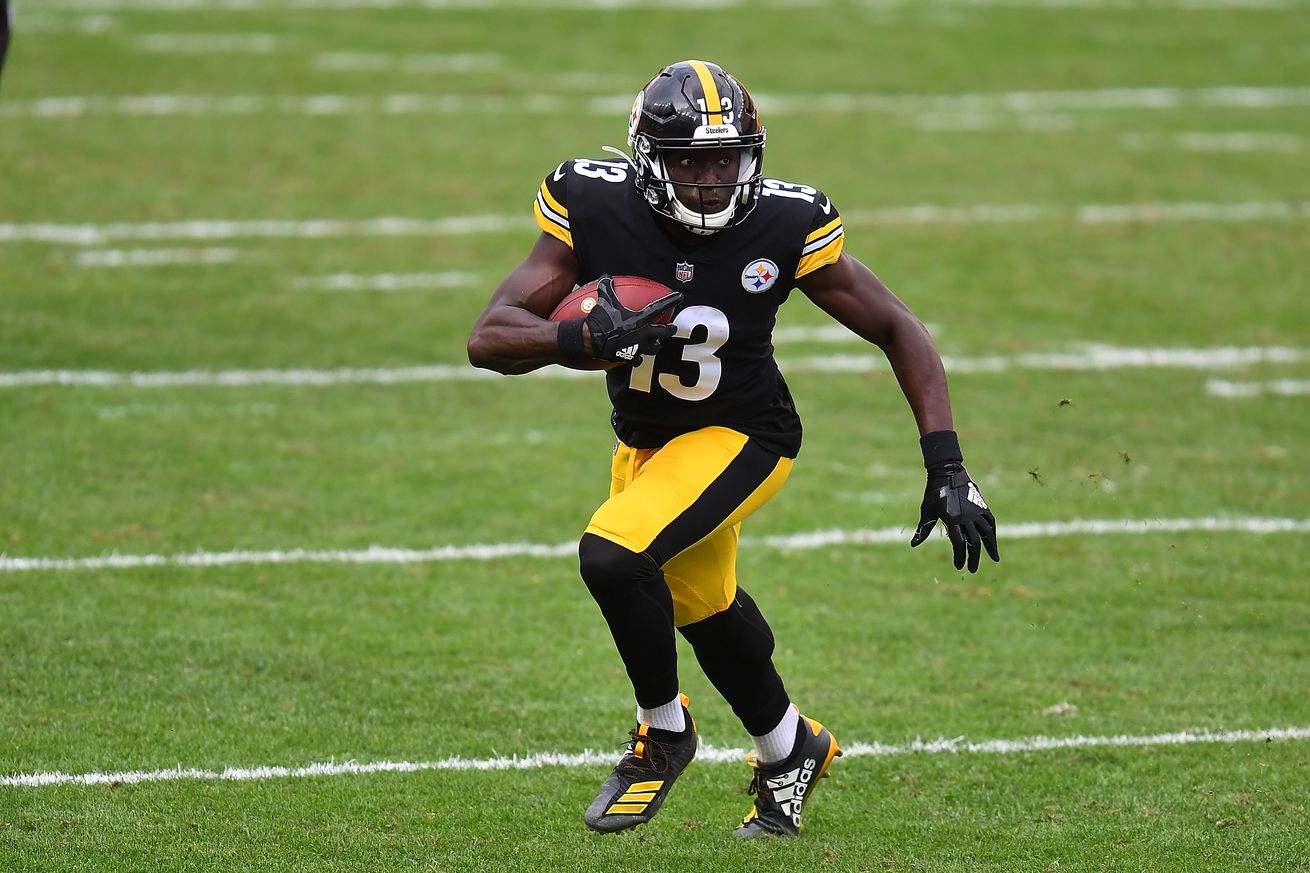 The Pittsburgh Steelers Week 9 game vs. the Dallas Cowboys could be just what the doctor ordered for James Washington.

This week, we are previewing the game between the Pittsburgh Steelers (7-0) and the Dallas Cowboys (2-6) at AT&T Stadium in Dallas. The Steelers remain undefeated after last week’s heart-pounding 28-24 victory over the Baltimore Ravens while the Cowboys lost to the Philadelphia Eagles, 23-9.

The Steelers-Cowboys rivalry was, for a time, one of the best in the NFL. It included three Super Bowl matchups between 1978-1995 and some memorable regular-season clashes. It has died off a bit in the 2000s. The league’s current scheduling format limits AFC and NFC teams to just one meeting every four years. Plus, the Cowboys have become a shell of their once-dominant selves. Since their Super Bowl title in ‘95, Dallas has gone 4-10 in the playoffs and has never advanced past the divisional round. The Steelers, meanwhile, have won 17 playoff games over that time, made seven AFC Championship game appearances, three trips to the Super Bowl and earned a pair of Lombardi’s. There is no question which franchise has remained elite and which is living in the past.

The play on the field last Sunday underscored the chasm at present between these two teams. The Steelers-Ravens game was NFL football at its finest: two powerhouse franchises playing a physical, largely well-executed contest that ebbed and flowed and was not decided until the final whistle.

Eagles-Cowboys was a junior varsity affair by comparison. The Cowboys were quarterbacked by someone named Ben DiNucci. They garnered 265 yards of total offense and didn’t complete a pass longer than 10 yards. Their most exciting play was a 59 yard field goal by kicker Greg Zurlein. It ain’t exactly Aikman, Irvin and Emmitt these days in Dallas.

Coach Mike McCarthy announced Wednesday that DiNucci would be replaced as the starter against Pittsburgh. “With the opponent we are playing, we need more experience,” McCarthy said. His candidates in that regard are back-ups Garrett Gilbert or Cooper Rush, two players you’ve only heard of if you root for the University of Texas or if you run the worst fantasy team in history. See if you can pick any of those quarterbacks out of the following lineup:

Neither Gilbert nor Rush are likely to be difference-makers on Sunday. Which isn’t to say Dallas can’t win. They retain a solid offensive line and one of the league’s most versatile backs in Ezekiel Elliott. They also have a talented receiving corps in Amari Cooper, CeeDee Lamb and Michael Gallup. Granted, the absence of starting quarterback Dak Prescott, who is out for the season with a terrible ankle injury, and backup Andy Dalton, who is on the Reserve/Covid list, makes them a vastly inferior team. But we have seen the Steelers lose to inferior teams before. And, after winning three straight big games over Cleveland, Tennessee and Baltimore, they could be ripe for a letdown.

Realistically, though, this a week where the Steelers should take care of business. Their keys to victory against Dallas on Sunday are simple: play solid football, don’t beat themselves with stupid penalties or costly turnovers and don’t fall into the “playing down to an inferior opponent” trap. This particular Steelers team feels too focused, too well-coached and too talented to do so. This would be an epic upset were the Steelers to lose. So long as they play to their capabilities, they won’t.

That said, I’m going to use this preview to highlight something I’d like to see the Steelers establish on Sunday. This is not something they will likely need to win this game in particular. However, moving forward, they may require it against better opponents in bigger situations. That thing is the re-emergence of James Washington as a vertical threat in the offense.

Where o’ where is James Washington?

Washington, the third-year receiver out of Oklahoma State, was one of the bright spots on an otherwise dismal Steelers’ offense in 2019. He led the team in receiving yards (735) and yards-per-catch (16.7) while making one of the signature plays of the season: a Derrick Henry-like stiff arm of a Cincinnati defensive back on his way to a 79 yard touchdown catch against the Bengals:

This season, Washington has just 17 receptions for 185 yards while his ypc is down to 10.9. Geoffrey Benedict chronicled in this piece how Washington played a career-low 10 snaps against the Ravens, catching zero passes. This makes two straight games for Washington without a reception, the first time that has occurred since early in his rookie campaign.

What gives? While the receiving corps is much improved with the additions of Chase Claypool, Eric Ebron and a healthy Juju Smith-Schuster, it seems odd that Washington has fallen from a top target in 2019 to the fifth option this year. He’s a good deep-ball receiver, as his 2019 numbers indicate, and, as we see below, he is accomplished at using his strength and body positioning to win the football on vertical routes:

The Steelers could certainly use another deep-ball threat in the offense. As per Mike Sando of The Athletic:

The percentage of a team’s pass attempts gaining more than 15 yards is one measure of explosiveness… The Steelers rank 31st, ahead of only the winless New York Jets, in this category. They are at 11.6 percent, which is a tick below the Steelers’ percentage in 2019, when Ben Roethlisberger hardly played and the offense was horrific.

Adding in runs of at least 12 yards, the Steelers are averaging 5.9 explosive plays per game this season, ahead of only Washington and the New York teams. That would be the lowest average for Pittsburgh in any season when Roethlisberger was the primary starting quarterback.

The Ravens were daring the Steelers to throw deep last week by playing man-coverage outside the numbers. Roethlisberger took several downfield shots but, other than a couple of pass interference calls, could not exploit those matchups. It did not hurt them in the end, but there will likely come a time during the season when the Steelers will need to be more sudden on offense, when their deliberate approach that (granted) has been very effective to this point will not click and the unit will require another solution.

Claypool, the dynamic rookie from Notre Dame, has already shown he can be a deep-ball threat. But his yards-per-catch has leveled off lately. Claypool has caught 10 balls for 114 yards the past three weeks for an average of 11.4 ypc after going 13-261-20.0 the first four games. Teams are beginning to rotate coverage to him and give him the star-receiver treatment.

This should open the door for another receiver to emerge as a downfield target. Diontae Johnson has the quickness to be that player. But he has battled injuries on and off this season and is averaging 9.3 ypc. Smith-Schuster is averaging 8.9 ypc, a full four yards below his career average. Ebron is a walking mismatch but has been used more in a catch-and-run role than as a pure deep-ball threat. The Steelers took a couple of downfield shots to Ray-Ray McCloud against Baltimore, one of which drew a PI call. McCloud has been better as a quick-screen receiver, however, and is averaging just 5.0 ypc on six receptions.

Which brings us to Washington. Part of the reason Washington has played so few snaps and received so few targets is the emergence of Ebron and Claypool in the offense. The Steelers are a heavy 11 personnel team to begin with. Now, with Ebron playing so well in both a receiving and blocking role, and with the fact he can line up in the slot when the Steelers want to present four or five-wide looks to a defense without substituting, there has been little true 10 personnel this season.

Such was the case last Sunday. It may have seemed surprising to see McCloud on the field instead of Washington when the Steelers went to a 01 grouping (0 RB, 1 TE, 4 WRs) for the entirety of the 8-play, 80 yard fourth quarter drive that put them up for good. However, that was a product of the fact they had Johnson and Claypool manning the outside receiver roles and worked Smith-Schuster, Ebron and McCloud on the inside.

Here, on a big 3rd and 2 conversion during that drive, Roethlisberger hit McCloud on a shallow cross that required a quicker receiver who could navigate traffic and run after the catch:

That is not a role at which Washington excels. Washington is purely an outside receiver and seems to be firmly behind Claypool and Johnson at this point. McCloud wasn’t stealing Washington’s reps in the 01 grouping, then. Claypool was. And because the Steelers went to an on-the-ball tempo, they did not substitute personnel on the drive.

Claypool is yet to show signs of hitting the so-called “rookie wall.” His chunk plays have declined a bit the last few weeks but, as noted above, that may be because he is drawing more attention from opposing defenses. The Steelers have yet to reach the halfway point of the season, however. It would be great to have an alternative, or at least another deep threat, regardless of Claypool’s production.

James Washington can be that player. This week, against a Dallas defense that ranks dead last in the league against the run, there could be great opportunities for deep shots if the Steelers can establish a rushing attack and force the Cowboys to bring a safety down as an eighth defender in the box. Washington thrived last season in the one-on-one scenarios a single-high safety defense presents. It could be a chance to get him going this Sunday, the benefits of which may resonate far beyond Monday morning’s box score.

Super Bowl teams often have the ability to score in a variety of ways. The Steelers have shown they can be patient, take what a defense is giving and execute their way down the field. They already have 16 touchdown drives that lasted seven plays or more this season, including drives of 16, 13 and 12 plays. They have not, however, shown they can be sudden. Discounting drives on short fields set up by turnovers, they have just two that lasted four plays or less. One was an 84 yard bomb to Claypool in the Denver game. The other? A 28 yard strike to Washington that culminated a four-play, 50 yard drive against Cleveland.

One way or another, the Steelers should handle the Cowboys in Dallas. If they can find a way to jump-start James Washington in the process, it will be an especially worthwhile trip.