Last summer, Steelers GM Kevin Colbert indicated he did not want to enter into a multi-year extension with the team, as he prefers to take things on a year-to-year basis. Earlier this month, the 63-year-old signed another one-year contract with the club to remain in his general manager post through the 2020 campaign. 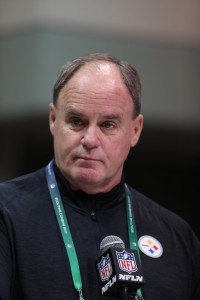 But in a meeting with Steelers beat writers today, Colbert indicated he is not thinking about quitting anytime soon. “As long as the Rooneys and the Pittsburgh Steelers want me to be a part of this organization and it’s a good thing for our family, we’ll be here,” Colbert said. “I’m not looking to ever go anywhere else again as long as the Rooneys and the Steelers are interested in me” (Twitter link via Brooke Pryor of ESPN.com).

So while Colbert may prefer the flexibility that his one-year extensions afford him, it sounds as if he will continue to lead the Pittsburgh front office for as long as the team wants him to and for as long as his personal life permits. And for good reason. Colbert joined the Steelers in 2000, was promoted from director of football operations to GM in 2010, and has helped build two Super Bowl-winning teams and 12 playoff squads over the years.

In his conversation, Colbert also discussed the status of QB Ben Roethlisberger. We heard in December that Big Ben is expected to make a full recovery from surgery to reattach three tendons in his right arm, and Colbert said today that he believes Roethlisberger’s rehab is going in the right direction (Twitter link via Pryor). The veteran signal-caller has a checkup in Los Angeles on February 21.

Colbert further indicated that the injuries that plagued JuJu Smith-Schuster, James Conner, and Vance McDonald last year would not impact their long-term availability (Twitter link via Pryor). And in other Steelers news, Gerry Dulac of the Pittsburgh Post-Gazette tweets that the Steelers are expected to hire a new WR coach any day now. The team is deciding between Jerricho Cotchery and Bryan McClendon.