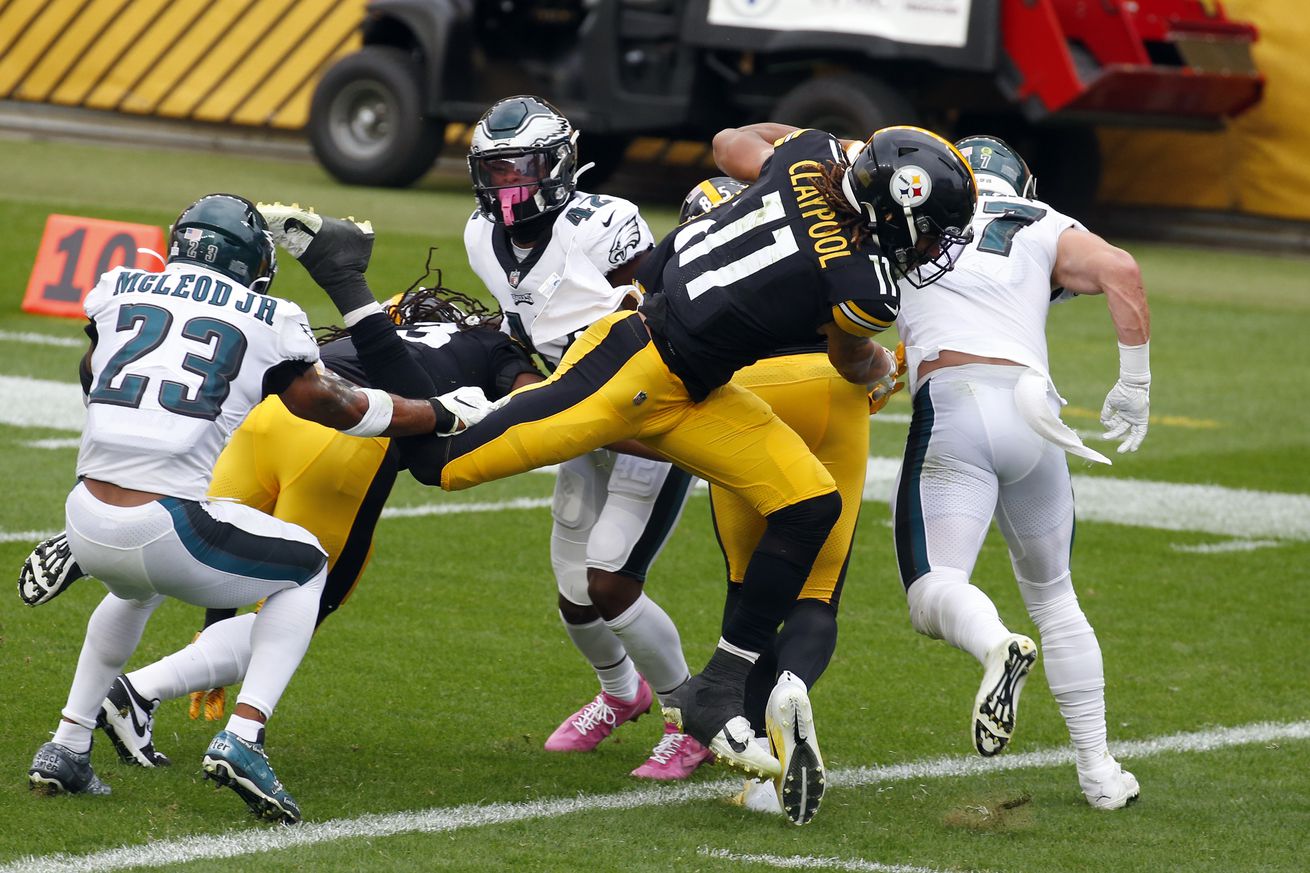 Other than Chase Claypool’s magnificent four-touchdown effort, it wasn’t a pretty performance by the Steelers on Sunday afternoon at Heinz Field. However, they still managed to defeat the Eagles, 38-29, to improve to 4-0 for the first time since 1979.

The Steelers never make it look easy, do they? Thankfully, receiver Chase Claypool has so far during his rookie season. Everything the former Golden Domer touched on Sunday turned to gold in a 38-29 victory at Heinz Field that wound up being much closer than it initially looked like it would be.

Claypool caught seven passes for 110 yards and three touchdowns, while also running one in for a fourth. Pittsburgh’s defense, one that struggled to contain unknown wide-out Travis Fulgham, who had 10 catches for 152 yards and a score for a Philadelphia receiving corps that came into the game decimated by injuries, needed every last one of those scores.

The Steelers offense looked mighty potent on Sunday, tallying 367 total yards and scoring on six of its 10 possessions, including five touchdowns.

Only problem was a defense that allowed the Eagles offense to immediately reach pay-dirt after three of those touchdowns.

In addition to having no answer for Fulgham, the Steelers defense allowed Philadelphia to convert on 10 of its first 12 third-down attempts and had trouble containing and corralling quarterback Carson Wentz for most of the day.

Thankfully, like most great defenses—and despite its inconsistencies so far in 2020, I’m still of the opinion this is a great defense—Keith Butler’s unit stepped up when it had to.

One such example occurred early in the second half. The Steelers, who led 17-14 at the break, took the opening kickoff of the third quarter and marched 78 yards on a six-play drive that ended when quarterback Ben Roethlisberger, who completed 27-34 passes for 239 yards and three touchdowns on the day, connected with Claypool on a five-yard score to make it 24-14.

Based on how the defense responded to its team’s touchdowns in the first half, it would have been perfectly fine to expect it to immediately allow the Eagles to score one of their own. Not this time. Instead, cornerback Steven Nelson intercepted a Wentz pass at the Philadelphia 23, and the offense rewarded that effort when running back James Conner temporarily interrupted Claypool’s scoring binge with a one-yard touchdown of his own.

The Steelers were sitting pretty with a 31-14 lead, and it felt like they would finally get to have an easy victory.

But as I’ve said before, these Steelers don’t like easy, and Philadelphia scored 15 unanswered points to crawl back to within a field goal of taking the lead.

Just how close were the Eagles to doing that? So close, just moments after tight end Eric Ebron fumbled at the Philadelphia 39, kicker Jake Elliot trotted out to attempt a 57-yard go-ahead field goal with 3:18 remaining.

Elliot had the distance but not the accuracy.

Another example of this Steelers defense doing its thing when it had to came after Claypool officially submitted his Rookie of the Year application with a 35-yard touchdown catch on third and eight to make it 38-29 left in the fourth quarter. To repeat, the Steelers defense had trouble getting to Wentz for most of the day, but Pittsburgh still somehow managed to post five sacks with none being more important than Bud Dupree’s 10-yard takedown on the first play of the Eagles final possession. Three plays later, Nelson put the game away with his second interception of the day, and the Steelers were officially 4-0 for the first time since the 1970s.