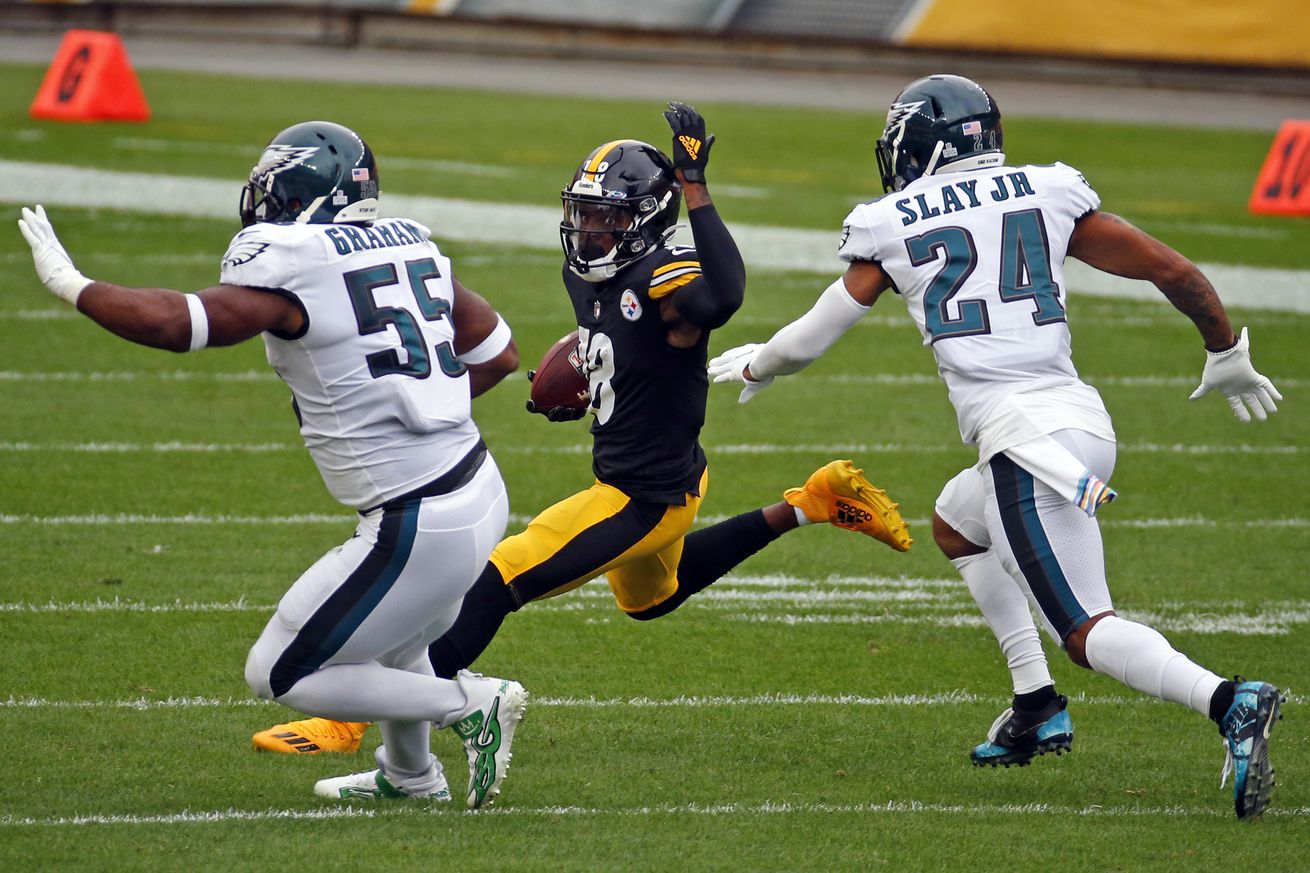 Both players who exited in the first half of the Steelers game last Sunday will also miss this week.

The Pittsburgh Steelers are finishing up their preparation for their Week 6 matchup against the Cleveland Browns this Sunday at Heinz Field. In the final injury report of the week courtesy of the Steelers PR department, two players carry an injury status for Sunday. Unfortunately, David DeCastro and Diontae Johnson have been ruled out against the Browns.

The good news for the Steelers are the number of players who will be available for Sunday. Maurkice Pouncey seems to not be suffering any ill affects from his foot injury which caused him to leave last Sunday’s game against the Eagles just before it had concluded.

More great news for the Steelers is the return a fullback Derek Watt and linebacker/safety Marcus Allen who missed the Steelers Week 5 game. Both players were full participants in practice all week and will be available for the Steelers on Sunday.

With other players who had missed time due to injury throughout the week such as JuJu Smith-Schuster, Eric Ebron, and even T.J. Watt who was limited on Wednesday, it appears all players are healthy and good to go.

One blemish on the Steelers status for Sunday is DeCastro, who will miss his third game of the season. Only playing in five quarters so far in 2020, it has given the opportunity for rookie fourth-round draft pick Kevin Dotson to get more playing time. Dotson is anticipated to start on Sunday as he looks to continue to showcase his talents. Dotson is currently the highest ranked pass blocking guard according to Pro Football Focus.

The other player who is out for Sunday’s game is wide receiver Diontae Johnson. Returning to practice in a limited capacity on Thursday with a back injury, it was hopeful Johnson would be able to go for Sunday. Unfortunately, he was unable to practice on Friday which will keep him out of Sunday’s game.

Another player for Steelers’ fans to keep an eye on over the next couple days is offensive linemen Stefen Wisniewski. After returning to practice on Wednesday, the Steelers would be able to activate Wisniewski to the 53-man roster should they choose for Sunday’s game. If so, a corresponding roster move will have to be made. Wisniewski could bring some added depth on the Steelers’ offensive line with DeCastro being unavailable.

As for the Browns’ official injury report, you can find the list below courtesy of Steelers.com. The Browns will be without safeties Ronnie Harrison and Karl Joseph as well as their starting right guard Wyatt Teller.