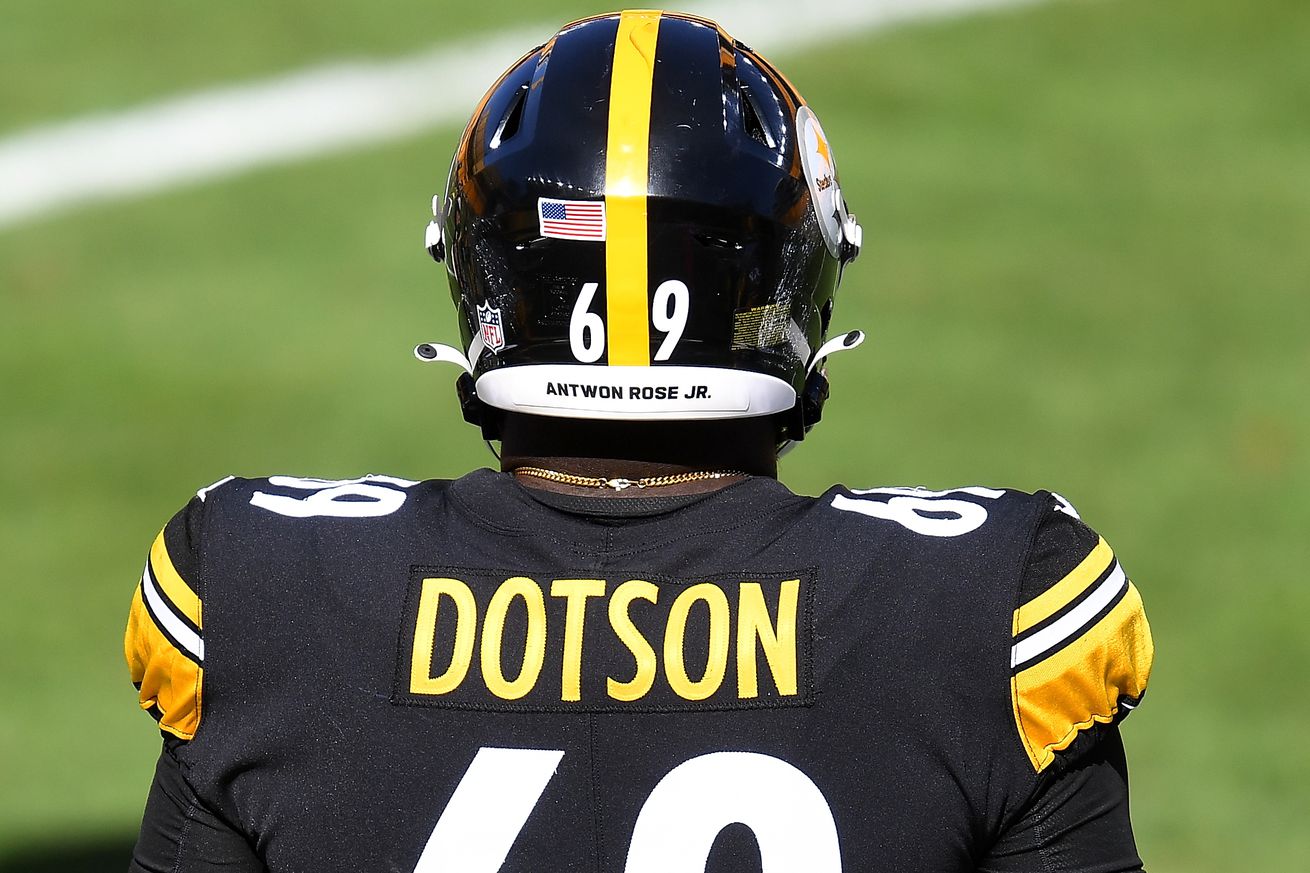 If going by the scores given by Pro Football Focus, Dotson is at the top of the list as a pass blocker

The Pittsburgh Steelers entered the 2020 season with the mentality of not relying on any of their rookie class to step into key roles right away. There were several factors which led to this mentality, but the Steelers have often tried to not count too much on their rookies. Yes, 2019 was an exception with the Steelers trading up into the top 10 to draft Devin Bush. But between not having a first round pick in 2020 due to the trade for Minkah Fitzpatrick coupled with the lack of on-the-field-preparation during the offseason, the Steelers were not counting on their 2020 rookie class in order to be successful this season.

Sometimes when you’re not looking for something, great things happen.

The success of Steelers’ wide receiver Chase Claypool has now caught the eye of everyone in the NFL. Following his four touchdown performance in Week 5, Claypool was selected as the AFC Offensive Player of the Week.

Another surprise from the Steelers 2020 draft is one many believed would not see the field this season. But after injuries to David DeCastro and Stefen Wisniewski, rookie Kevin Dotson was called to start in Week 2 of his rookie season.

After DeCastro‘s return for Week 3, Dotson was relegated to reserve duty until DeCastro went down again in the first quarter of the Steelers Week 5 matchup against the Philadelphia Eagles.

Once again, Dotson was ready to answer the call.

According to Pro Football Focus’ player grades, Dotson is ranked a respectable 24th among the qualifying guards throughout the NFL. But when looking at the specific breakdown of Dotson scores, he is the highest ranked guard at pass protection.

Yes, you read that correctly. It says pass protection.

The reason this is so intriguing is because pass protection was believed to be Dotson‘s ultimate weakness coming into the NFL. Labeled as a “road grader” who was not even invited to the NFL combine, Dotson is scoring ahead of the rest of the league after nearly two complete games playing in the NFL with a grade of 88.8 according to PFF. Not only that, Dotson’s score is 3.5 points ahead of the next closest guard in Michael Onwenu of the New England Patriots (85.3).

Here is a reminder of Dotson’s draft profile before he was selected by the Steelers in the fourth round according to TheDraftNetwork.com.

PROS: Big and physical. Love how he rolls his hips into contact, fits his hands and accelerates his feet to create push in the run game. Does well to keep his pads low and maximize his functional strength. Pop in his hands is notable, as is his core strength. He does a great job staying square throughout the rep as a run blocker on account of his core strength and how well he can absorb contact. Has a road-graders mentality and he puts people on their back. Always works to finish. Started 52 consecutive games at right guard for Louisiana.

CONS: Has to work on his footwork in pass protection to maintain a consistent base and set himself up to slide and mirror. Plays too tall in pass protection and when combined with his inconsistent base, it leads to body control issues. Frequent short sets in college so he has a long ways to go in terms of executing pass blocking sets that are what he’ll be tasked with in the NFL. Has some waste bending tendencies. Range is modest for pulls and work on the second level. Has only played one position.

So were the draft experts wrong about Dotson, or has he and the Steelers worked hard at improving his pass protecting skills? Ultimately, it doesn’t matter. What is important is Dotson is getting the job done, and he’s doing it at a high level.

Dotson it may be called into action again in Week 6 as the Steelers take on the Cleveland Browns. All-Pro guard David DeCastro is dealing with an abdominal injury and his status for Sunday is unknown at this time. But one man’s loss is another man’s gain as Dotson is ready for his “next man up” moment yet again in 2020.

Whether or not Dotson continues to score high when it comes to pass blocking remains to be seen. For the time being, he is getting the job done and has the potential to be another steal in the NFL draft for the Pittsburgh Steelers.