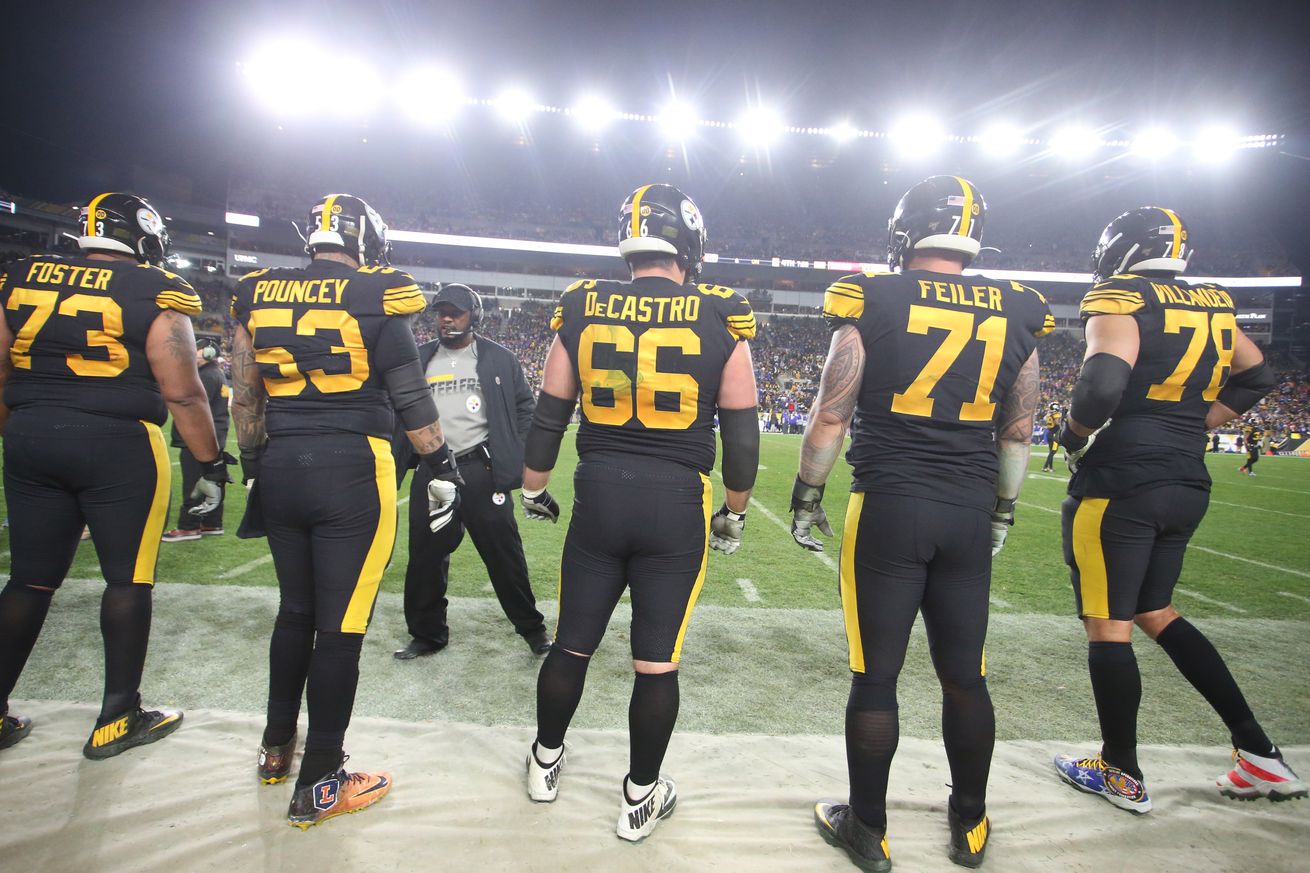 Looking at the state of the offensive line heading into the 2020 season.

As the first NFL football of the 2020 season approaches we are going to take a look at the Steelers roster, position by position, discuss the major players and story lines of the position and also give links to some relevant film rooms from the off-season you may want to watch.

The Steelers offensive line has been a strength of the team since the arrival of Mike Munchak in 2014, and while the line did not look as impressive in 2019, their first season without coach Munchak, they were also playing under tough circumstances as defenses loaded the box and blitzed the Steelers heavily.

The Steelers run game was not good, but it also faced the highest rate of stacked boxes of any NFL team. Young quarterbacks and a depleted receiver group put a heavier burden on the offensive line, and while they struggled under the added weight, they still showed their ability to protect the quarterback, ranking 7th in ESPN’s pass block win rate as a team.

The offensive line will be looking for a bounce back in 2020 and a return to being considered a top 5 unit in the NFL.

The line is still led by Maurkice Pouncey, the 31 year old center who joined the Steelers over a decade ago. Despite his age he remains one of the most athletic centers in the NFL. Pouncey is still very dangerous as a pulling lineman, and his long experience with quarterback Ben Roethlisberger and leadership in the locker room make him an incredibly valuable asset for the Steelers.

Maurkice Pouncey struggled at times last season with powerful rushers, but he wasn’t bad compared to other centers in the league, just not what we are used to seeing from the 8-time pro-bowler. Pouncey also struggled snapping the football in 2019, something that fans haven’t seen from him before. With Ben Roethlisberger back Maurkice Pouncey will need to have a bounce back season, especially with his snaps, as the Steelers star quarterback can’t make plays without the ball in his hand. While I expect Pouncey will bounce back in 2020, if he doesn’t, the Steelers may have to find a new center mid-season.

David DeCastro was drafted in 2012, and since he became a starter in his second season he has missed 4 games in 7 seasons. DeCastro is a fantastic guard, having made the pro bowl the last five seasons while being one of the Steelers best run blockers. DeCastro was a reliable bright spot in a chaotic season, and should continue that level of pay, even as he breaks in his third partner on the right side in three years.

Alejandro Villanueva has played left tackle for the Steelers for 5 years now, but he is the oldest lineman and third oldest player on the roster. Villanueva at times looks like the weak link on the offensive line, and other times reminds everyone why he’s the player the Steelers choose to protect Ben Roethlisberger’s blindside. 2020 is the last season on his current contract, and with two young tackles on the roster fighting to earn playing time, Villanueva is likely playing for his future this season.

Matt Feiler went undrafted in 2014 out of Bloomsburg college, but by 2016 he had found his way to the Pittsburgh Steelers roster as a backup guard. In 2018 he got the chance to start 10 games at tackle after Marcus Gilbert was injured, a job he kept in 2019. In 2020 the Steelers are moving Feiler back to guard to replace the retired Ramon Foster. Feiler brings a high level of play but also extreme position flexibility, able to play any position on the line at a high level. Feiler will also be a free agent after the 2020 season, and at 28 years old, he still has a shot at a big contract if he can stand out.

The fifth starting spot will be filled by either Chukwuma Okorafor or Zach Banner, who are battling for the right tackle job through camp. Whether there is a clear winner or not, the Steelers will enter the season with a relatively untested right tackle and a backup that isn’t much of a drop off from the starter. Banner is 26 years old, while Okorafor just turned 23.

Zach Banner is a large and long lineman, standing 6’8” tall with 35 inch arms. He is a physical blocker who moves defenders, but isn’t always the most technically sound.

Chukwuma Okorafor is smaller than Banner, but still has prototypical tackle size. He isn’t as powerful as Banner, but he has great footwork.

Stefen Wisniewski is a ten year veteran who has started in two recent super bowls. He can play anywhere on the interior of the line, and while the Steelers are sticking with players that have been on the field for the team at starting spots, Wisniewski isn’t much of a drop off from any of the starters.

The top seven lineman are a good group, and any of the seven could be asked to start and hold their own. That depth may be important, as four of the seven are 30 or older. If any of them miss time, it is good to know the backups should be able to step in and play well.

Kevin Dotson is very likely to be on the 53 man roster, the 4th round pick would likely earn a spot to protect him, but reports of him playing well in training camp have likely sealed his status as the eighth lineman on the team.

Derwin Gray has looked good in practices and preseason games last year, but has yet to play in a game. With no preseason this year and injuries limiting his practice time, it will be tough for Gray to earn a spot on the roster, but it is likely he could make it through the season on the practice squad.

The Steelers will likely keep a center on the practice squad, and without any games to judge who may be leading that competition I would expect J.C Hassenauer to win the job, since he has been around the team longer than other candidates.

It is important to remember that while the roster size is still 53 spots, the active roster is expanded to 48 for this season, but the team has to have 8 active offensive lineman or they will be limited to 46.

I have ten offensive lineman listed here, but with the knowledge that they need to have 8 lineman active for every game, we could see additional lineman on the practice squad. Those players could come from cuts around the league, or from the remaining players on the roster.

The remaining lineman on the current Steelers roster are:

Here are some film room articles from this off-season if you want to look deeper into the offensive line as we head from the 2019 to the 2020 season.

And his great series focusing on the offensive line from earlier this summer:

The state of the offensive line

And on the competition for right tackle: