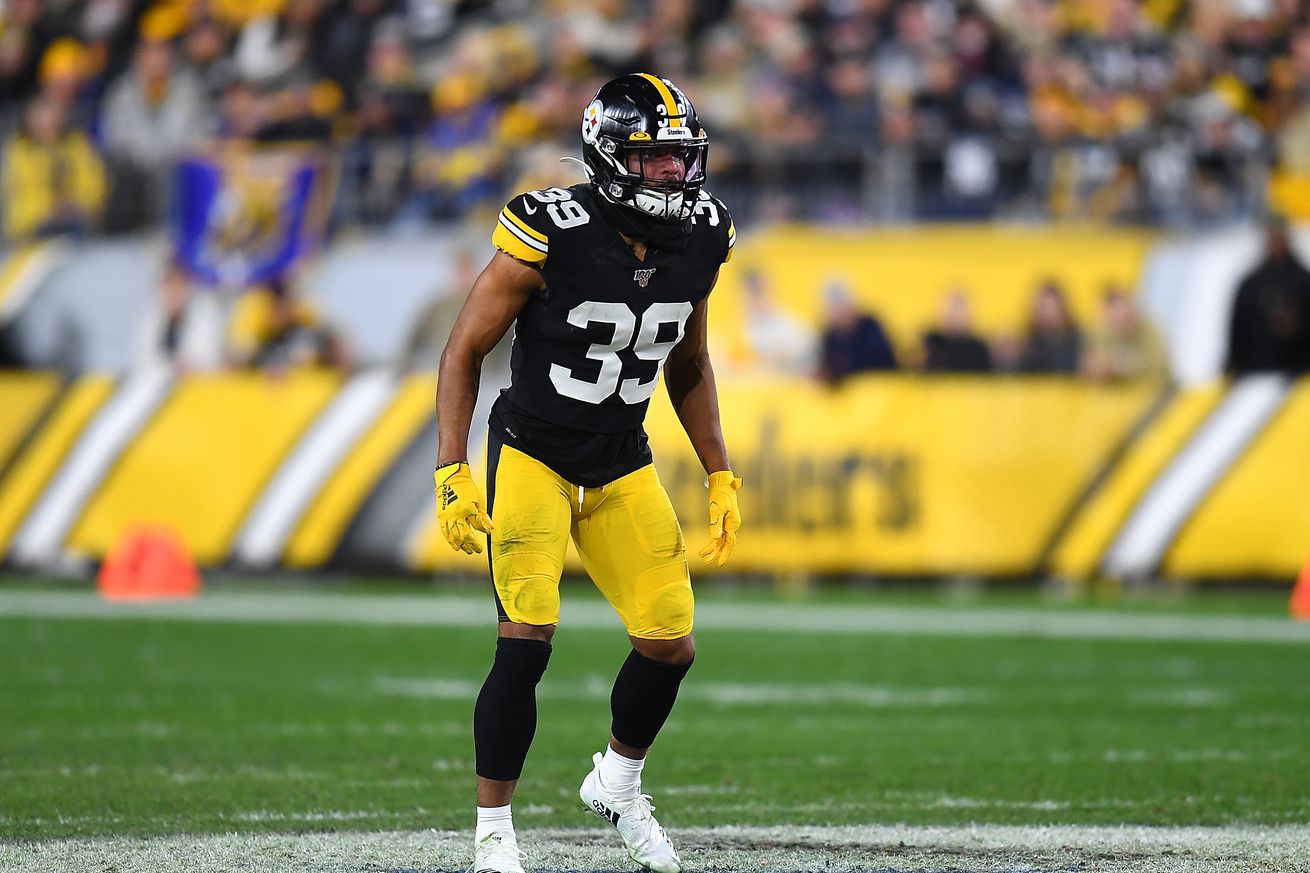 Looking at the safeties heading into the 2020 season.

The Steelers started the 2019 season with veteran Sean Davis entering the final season of his rookie deal, and his second season manning the free safety position for the team. The loss of Davis for the season week 2 led the team to part with their 2020 first round pick in a deal for Minkah Fitzpatrick with the Miami Dolphins.

Opinions were all over the place on the deal, I liked the deal because Minkah Fitzpatrick was exactly the type of slot corner/safety that the Steelers had been looking for, and was still young with great upside. But I could not have predicted, and I doubt anyone else could either, the impact Minkah Fitzpatrick’s arrival would have on the Steelers defense, and the course of he season.

Heading into his second year on the team, with an actual off season to work with his coaches and team mates, what should we expect from the safeties in 2020?

A kind of Fitzmagic

Minkah Fitzpatrick was viewed as many things coming out of Alabama in the 2018 draft, but one things he was almost universally not seen as, was a free safety. You can find any number of reports putting his best usage as strong safety, slot cornerback, outside corner and dime linebacker, but go ahead and try to find a draft analyst that thought he would be best used at free safety, I’ll wait. Actually I won’t, but this article will.

The 2019 season proved those analysts wrong, right? Well. . . kind of. Minkah Fitzpatrick’s best use isn’t as the deepest defender on the field. By deepest defender, I mean the defender tasked with being the last player between the opposing team and the end zone. That’s commonly the free safety’s job, and also not Fitzpatrick’s best usage. He did a good job when the Steelers put him in that role, far better than anyone else the Steelers had after Sean Davis’ injury, but that speaks more to Fitzpatrick’s overall athleticism, intelligence and versatility than to him belonging in that role.

The Steelers use a lot of cover-1, especially on early downs. Sean Davis was at his most valuable in that role, where his good reading of the play in front of him, and speed to the sideline consistently limited the damage offenses could do when they bested Davis’ team mates. Minkah Fitzpatrick brought a different dynamic to the free safety position. Fitzpatrick tended to stay up closer to the line of scrimmage, and he didn’t drop back as deep as most free safeties, he seemed perfectly content with letting receivers get behind him and trailing them. There’s a reason analysts saw him as a cornerback after all.

Fitzpatrick is even more dynamic when he is attacking forward, crashing the short middle of the field, disrupting the routes teams like to run to give their quarterbacks easy throws. But the most valuable asset Fitzpatrick brings to the field is his intelligence. Almost all NFL players watch film, they take notes, they study, they put in the work required to do their job, and often put in more in order to try and improve their impact in the game. Minkah Fitzpatrick shows the ability to take that film, apply it to the what he is seeing on the field in real-time and make the right moves to take away what the offense wants to do. It gains him comparisons to Troy Polamalu, who also seemed to be able to read the offense’s mind and turn that knowledge into big plays.

Those big plays are the reason I don’t like Minkah Fitzpatrick locked in as the deepest defender on the field, because as we all remember, when Troy Polamalu would freelance to make a play, sometimes he got burned, Fitzpatrick has, and will get burned again as well, but if Fitzpatrick is the deepest defender on the play, there won’t be someone to limit the damage like Ryan Clark did for Polamalu. The deepest defender can’t leave his assignment to take a gamble on making a big play. That’s why analysts didn’t see Fitzpatrick as a free safety. The Steelers saw it too, and they used far more multiple deep zone defensive schemes after week 3, when Fitzpatrick’s first game on the team showed that single high safety wasn’t the best place for him. As the season progressed they would find more and more creative ways to get Fitzpatrick out of that deepest defender role on passing downs, and it made it really hard for opponents when Fitzpatrick could read the offense and take chances to make plays.

Heading into the 2020 season Minkah Fitzpatrick will be the teams starting free safety, and with an off season at the position, I think we’ll see him play much better in that deepest defender role, but I also expect the Steelers to have a lot of plans that get him out of that role, making him much harder to locate and avoid for the opposing offense. This may not sound like a glowing review for the young Steelers star, but consider this; last season was Minkah Fitzpatrick playing a new position that he hadn’t played much, in a defense he didn’t know, and he made an incredible impact even though it wasn’t that hard to know where he was and what he was doing. The Fitzmagic show is just beginning.

Terrell Edmunds is built like he was engineered to be an NFL strong safety. He stands 6 feet tall, 217 pounds with 10.5 inch hands, an impressive 79 inch wingspan and 97th percentile athleticism. As a rookie he came second on the team in tackles, and tied for second in both interceptions and fumble recoveries (albeit with one each). He added 4 passes defended and a sack to his resume. A really good debut season.

As 2019 approached he was preparing to take a step forward at the strong safety position, playing in front of veteran Sean Davis, who made the calls for the secondary and was used heavily in single deep safety, while Terrell Edmunds would be focusing on playing in the box and covering tight ends and slot receivers. His major roles on the defense were run support, and switching with linebackers to cancel mismatches the offense managed to create.

That all changed when Sean Davis was injured. Terrell Edmunds was now the veteran at safety in his second season, and would take over calling the defense, and as Kam Kelly showed he wasn’t able to handle deep zone coverage, Edmunds was forced into that role as well. When Minkah Fitzpatrick joined the team and started learning the defense on the fly Edmunds retained the job of communicating and making sure everyone was in the right spot, and as the team saw more and more the increase in value to be gained by getting Minkah out of single high safety, his deep zone assignments also kept coming.

Am I making excuses? Yes, absolutely. Terrell Edmunds was thrust into two roles he wasn’t focusing on, and wasn’t ready for. His best film comes in week 2, when Sean Davis was playing and Edmunds was playing the same role he played his rookie season, strong safety. Edmunds has to improve his deep zone defense, he is not good enough there at all, but also it would be nice if the Steelers limit his usage there and let him play to his strengths more. Terrell Edmunds is a great run support safety who has the ability to cover wide receivers in man coverage. He isn’t the best in zone defense, he doesn’t move with the developing play, he tends to watch the play and react to what is already happening, instead of seeing the play and adjusting to the flow of the play before things happen.

What Sean Davis brings to the safety position is the ability for the Steelers to put three safeties on the field and use them in any number of ways. That flexibility would make it very hard for defenses to predict where each safety will be post-snap, and when one of them is Minkah Fitzpatrick, that’s a big deal.

One thing that has been discussed with the departure of Mark Barron is the team using Terrell Edmunds in a similar role, essentially taking the nickle linebacker role against teams with athletic tight ends that like to line up in the slot. Terrell Edmunds is comfortable in slot defense, and he’s good in run support from that spot, something you can’t say for Vince Williams. The return of Sean Davis makes that much more attractive, as the team didn’t really have a good option for the other safety spot (if Edmunds slides into linebacker) before then. If Davis can get comfortable playing with Fitzpatrick, the Steelers can add using three safety sets to their ways to counter offensive personnel.

Every superhero does better when they have a sidekick that can cover for their weaknesses and help them play to their strengths. Minkah Fitzpatrick now has two sidekicks that the Steelers can use to maximize his impact on the field. With an off season to work on his new position, opportunity to work with coaches and to learn, but also to impact the defensive scheme, and two versatile and athletic safeties around him, this could be a truly special season for the Steelers’ newest star defensive back.

Curtis Riley is a 6 year NFL veteran with one season as a starter under his belt. Riley isn’t a well-rounded safety, and he has had problems with tackling, and possibly wouldn’t even be in the NFL right now if covid-19 hadn’t taken out the preseason and also led to expanded practice squads and the ability to put veterans on the squad. The Steelers named Riley one of their four protected practice squad players for week one, meaning Riley can’t be signed off the Steelers practice squad. If any of the top three safeties are set to miss a game or two, expect to see Mike Tomlin use a practice squad call up to get Curtis Riley on the active roster. He can play strong safety, but he is at his best when he is covering a part of the field in deep zone. He isn’t a single high safety, but he is really good in cover-3 and quarters zones.

Antoine Brooks Jr. is the only 2019 draft pick to not make the initial 53 man roster. With no preseason and Jordan Dangerfield occupying the special teams safety spot while being the only returning special teams ace to be active on the Steelers all of last season was too much to overcome for the 6th round pick. Antoine Brooks Jr. is a linebacker in a defensive back’s body. He is a developmental prospect for sure, if he can prove to be NFL capable in coverage, his blitzing and run defense will get him on the field, if not he’ll have to make his career on special teams.

The Steelers entered spent the off season and training camp with safety depth being a question mark. The play of mid-camp addition Curtis Riley and the eventual return of Sean Davis has turned what was a weakness into a strength. But more importantly, Davis is also a chess piece that they can utilize to put both Minkah Fitzpatrick and Terrell Edmunds in more favorable situations. After the incredible play of Fitzpatrick in 2019, before teams found it easy to avoid him, the idea that a much better season could be in store is an exciting proposition.