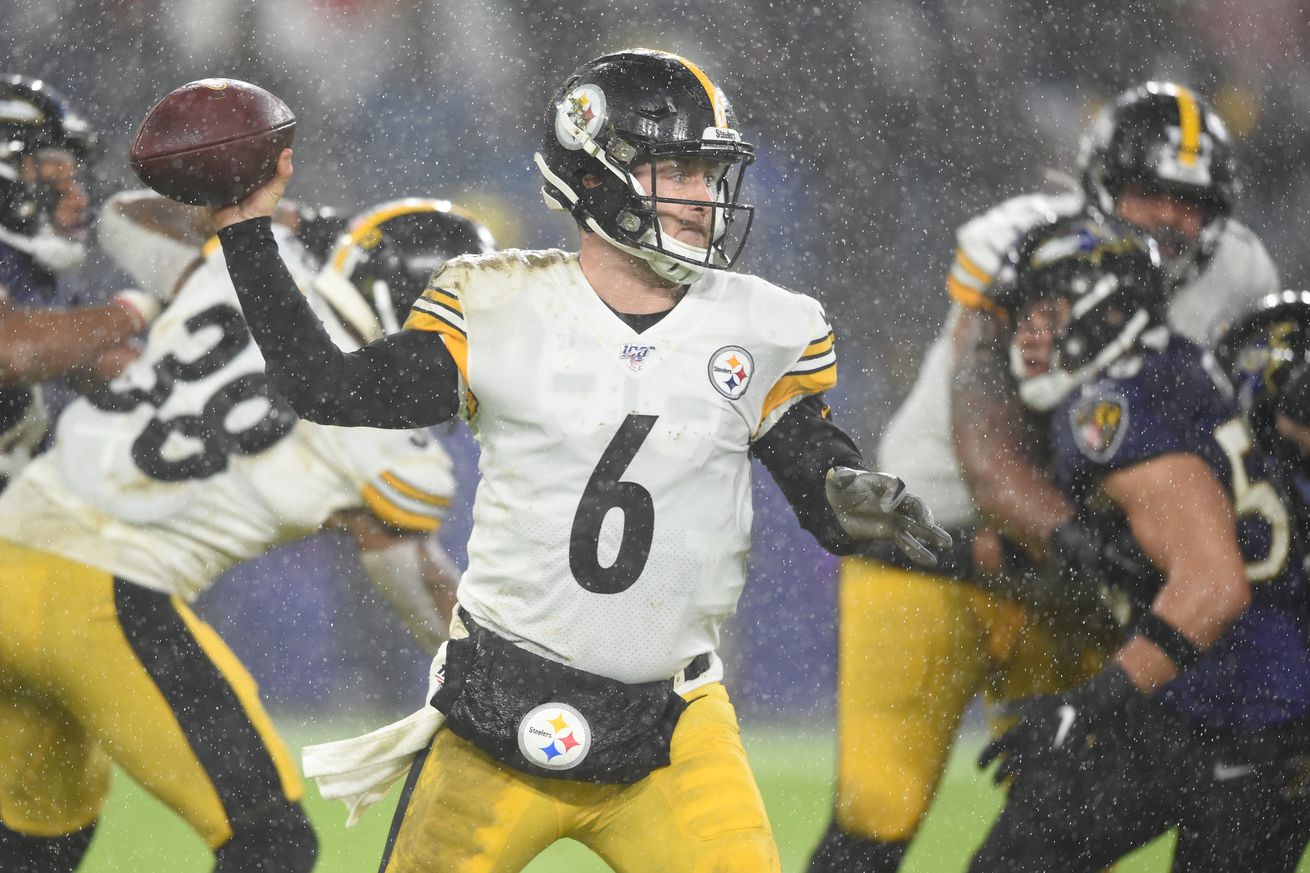 Looking at the quarterbacks heading into the 2020 season.

The story of the 2019 season centers around the loss of Steelers star quarterback, Ben Roethlisberger. In his absence Mason Rudolph and Devlin Hodges would quarterback the team to an 8-6 record that was built on the excellent play of the defense. Heading into week 15 of the season, the Steelers were 8-5, and the young backups were 8-3, with losses to the San Francisco 49ers, the Baltimore Ravens, and the Cleveland Browns.

It was an impressive run that ended when the team finally had to rely on Devlin Hodges to carry the offense to wins, and the young man wasn’t ready for that.

The story of 2019 was built around the loss of Ben Roethlisberger, and the story of 2020 will be built around his return. The team goes from 8-8 at the end of 2019 to a potential Super Bowl contender based largely off the thought that if Mason Rudolph, Devlin Hodges and skill positions that saw heavy turnover in-season can go 8-6 with this defense, the sky seems to be the limit for what it could do with a smart veteran quarterback who knows how to win, and has a history of playing big in big games.

The questions surrounding the Steelers franchise quarterback are all about how physically capable he will be, and how durable his elbow will be this season. His vision isn’t in question, his leadership and experience aren’t in question. As Ike Taylor said “It’s from the neck up, what #7 is bringing to the table.”

With depth and youth at wide receiver and running back, athletic veterans at tight end, and an offensive line that has been one of the best pass blocking units in the league for years now, that experience and leadership will be the big difference maker, not arm strength or athleticism.

The Steelers shouldn’t need Roethlisberger to be the hero all season long, they have a strong defense, and he should spend a lot of the season managing the offense, and far less of it playing hero ball than he has had to in the past. And if he’s still capable of putting the team on his shoulders and throwing them to a tough win? Number 7 could be hoisting Pittsburgh’s seventh Lombardi trophy at the end of the season.

The Steelers bring back their quarterback depth from the end of 2019, and they are in the unique position of having three backups with multiple starts in the NFL. The team added Matt Canada to the position of quarterbacks coach, but that position might as well be called the backup quarterbacks coach, because as Matt Canada admitted himself, there’s more he can learn from Ben Roethlisberger than teach him at this point in their careers. That’s not a bad thing at all, Roethlisberger has his quarterback coach manning the offensive coordinator job, and the backup quarterbacks don’t need to be doing more than paying attention and learning from their interaction. As we’ll cover, Matt Canada will have plenty of work helping the backups to develop.

Mason Rudolph is the backup to Ben Roethlisberger, the Steelers drafted him and they believe in him. His 5-3 record in 2019 and his stats before the week 11 Cleveland game show promise. But there are also some worrisome trends. Mason Rudolph stacks good plays, but he also stacks bad plays. When things went bad for the young quarterback in 2019, they stayed bad. The film shows a quarterback who struggled to move past mistakes. It showed up in his film, where bad plays would lead him to disrupt his timing and technique. It shows up in his stats with huge swings in completion percentage and yards per completion. It showed up in a really bad way in Cleveland where his decision making eroded as the Browns took away his go-to routes and started getting pressure to him. Everyone remembers the bizarre end to that game, but before Myles Garrett swung that helmet the story of the game was a young quarterback falling apart on the field.

Mason Rudolph has areas to improve on with footwork, progressing through reads faster and throwing his receivers open, but perhaps the most important step the Steelers need Rudolph to take is learning to put bad plays behind him, because he shows a lot of promise when he is playing with confidence.

Devlin Hodges was one of the biggest stories of the 2019 training camp and preseason. A rookie camp invite, Hodges impressed coaches enough to earn a training camp spot and ran with it. Hodges showed his ability, but more than that he showed an unflappable competitive spirit and the ability to stay cool in high pressure situations. His rise to fame, his success on the field and his collapse at the end of the season is one of he most interesting stories of the 2019 season.

Devlin Hodges wasn’t a Pittsburgh Steeler in week 1 of the 2019 season, he had been waived. The Steelers traded Josh Dobbs and added Devlin Hodges to the practice squad on September 10th. Five days later Ben Roethlisberger would leave the Seattle game, end his season, and Devlin Hodges would get called up to the active roster. Twenty-one days later, Devlin Hodges took the field against the Baltimore Ravens when Mason Rudolph was knocked out of the game. He would lead the team on two scoring drives, sending the game into overtime.

He would start week 6 in Los Angeles and win a game on the west coast, a rare feat for the Steelers. Later in the season he would win a game in Arizona, giving him two wins west of the Rocky Mountains, which is coincidentally, the same number of wins Ben Roethlisberger has in games out west, but while Devlin Hodges is 2-0, Ben Roethlisberger is 2-8 in those games. Fortunately the Steelers won’t play west of the Rockies in the 2020 regular season, and will avoid having to bench their future Hall of Fame quarterback for Devlin Hodges. (It’s a joke people)

It’s easy to see how the legend of Devlin Hodges got rolling, and how Duck Fever would sweep through a fanbase that was looking at a playoff window in the most improbable of circumstances.

That would all come crashing down in the final three weeks. After a tough loss to the Bills in week 15, Hodges was floundering. He would be replaced in week 16 by Mason Rudolph, who looked more like his pre-Cleveland self, only to re-enter the same game due to a Rudolph injury. The rest of the season was just bad.

On the other side of Duck-mania, the popular opinion has shifted drastically. Hodges struggled to read the defense late in the season, and is most commonly knocked for his arm strength, a limitation that seems to have taken on a mythical life of his own. Devlin Hodges in many circles now has the reputation of a half-blind, noodle-armed quarterback who doesn’t belong anywhere near an NFL field.

The truth lies in-between the myths. On film Devlin Hodges shows some real NFL traits, he moves through his progression quickly, has a quick release and throws with rhythm and anticipation. He also has a personality that allows him to shrug off mistakes and go back out and play confidently. Despite his widely publicized arm strength limitations, Hodges was statistically the best deep passer on the Steelers in 2019, even with his performance in the last two weeks when he had smashed head-long into the rookie wall.

Hodges arm strength is a negative, but not a prohibitive one. He has a lot to work on, his footwork and poise in the pocket, while not awful, aren’t NFL caliber, and his inconsistent mechanics lead him to inconsistent results. But his biggest weakness in 2019 was a lack of knowledge and experience, the rookie couldn’t take the incredible leap from FCS to NFL in one year. Once defenses had some film and time to figure him out, the duck was cooked.

With some on the field experience, a quarterback coach that will have time to actually help him develop and hopefully a season on the bench that he should have had a year ago, Hodges may turn into a solid NFL backup. If we could rewind the hype a full season, and remember the quarterback who came out of nowhere to earn the right to sit on a bench and learn the NFL game, I think most people would see that.

Paxton Lynch is a tall, cannon-armed former first round pick. He looks really good throwing a football in shorts. Unfortunately he hasn’t lived up to the promise when pads go on. Lynch is the newest hype train to come to town, and just like the Devlin Hodges hype train overlooked the reality of his talent and situation, Paxton Lynch’s hype train is making the same mistake.

Lynch is a physically gifted thrower who isn’t a good quarterback in what is likely his last chance to make something of his NFL career. His performance in camp hasn’t been good, but he is likely to make the practice squad because he’s cheap, he’s been here, and the Steelers will likely carry 4 quarterbacks due to Covid and the expanded practice squad.

Paxton Lynch could benefit from being in the room, watching Ben Roethlisberger and working on his mechanics, field vision and poise in the pocket with coach Matt Canada. A first round pedigree and being good at football in shorts won’t keep him in the NFL forever.

Yes, I spent almost half this article talking about the third string quarterback. Hopefully we can all settle down about Hodges and let the young man show if he can become the quarterback he clearly wasn’t in 2019, but has shown flashes that he could become in time.

As for 2020, the Steelers are in a really good spot. Mason Rudolph has shown he can come in and keep the team from falling apart for a few games, and when JuJu Smith-Schuster and James Conner were healthy, he was putting up respectable stats even with his many early season flaws. Rudolph improved over the course of the year, and in weeks 9 and 10 was starting to look like a quarterback who could turn into a starter in the NFL. If the Steelers need him to play a game or even three, they should be fine.

The real story here is Ben Roethlisberger is back. And this team will go as far as number seven can take them. In the past a great defense and Ben Roethlisberger at quarterback has been a recipe for championships. Let’s hope it can be that again.

Here are some film room articles about the different quarterbacks on the Steelers I think are valuable if you want to look a little deeper.

Bringing vertical threat back to the offense

Starting the game better on offense than in 2018

Breaking down his second half vs. Miami (YouTube video from Flip Fisher)

Looking at what he did well

Breaking down his most recent NFL action from 2017