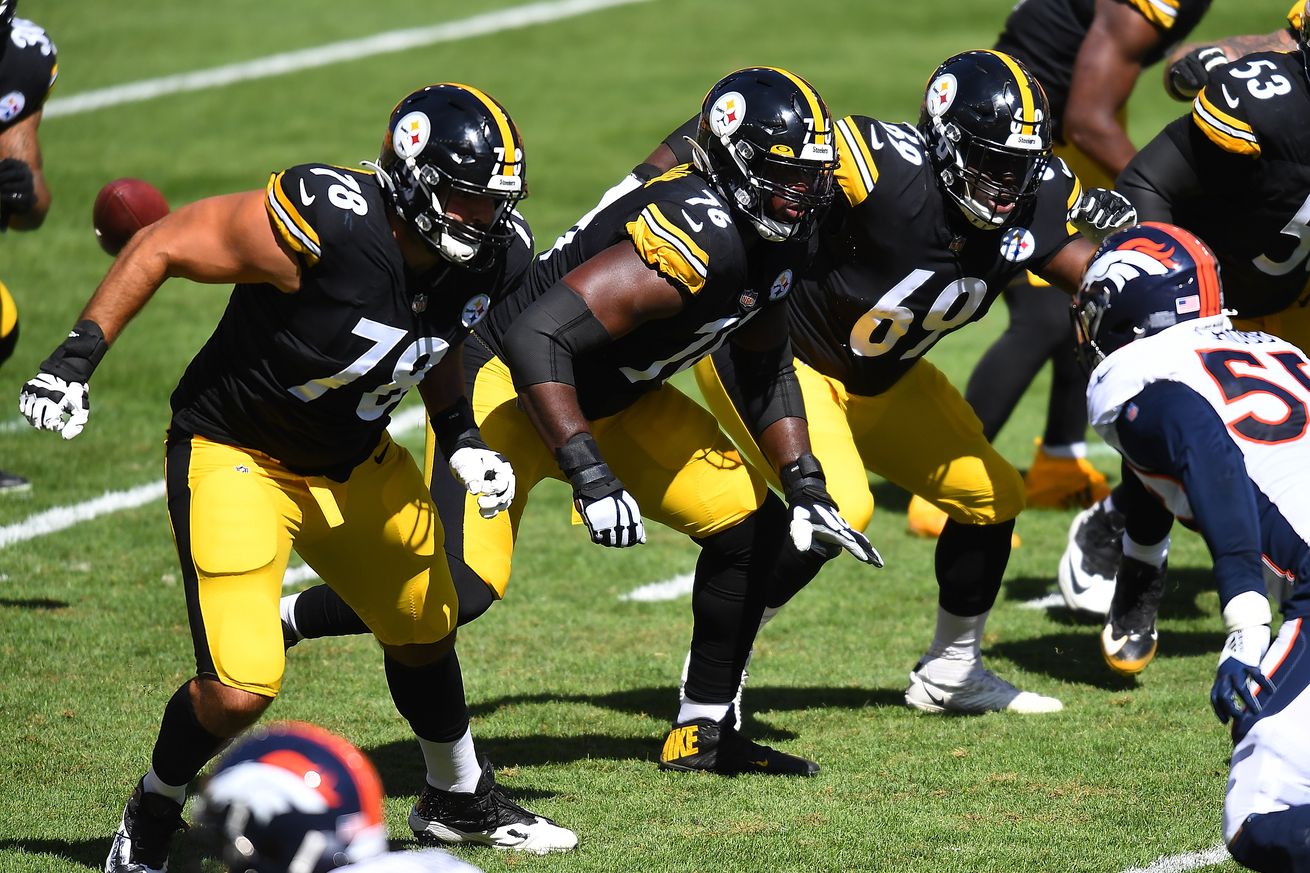 Discussing which Steelers players or positions are trending up, trending down, or simply treading water

Welcome to the latest edition of the Steelers Stock Report of the 2020 NFL season: Denver Broncos edition. I have been granted the distinguished opportunity to attempt to determine which direction individual players, or units, are trending after each weekly matchup, to the best of my ability.

Admittedly, the decision was much more difficult this week than last. Bud Dupree was a one man wrecking crew last week against the New York Giants. This week the selection for the individual player who’s stock is trending up the most wasn’t quite as obvious. There were actually three players worthy of the nomination.

T.J. Watt finished the game with 2.5 QB sacks and a handful of pressures, but that was to be expected and he will undoubtedly earn this distinction multiple times this season.

Rookie WR Chase Claypool showed once again all the hype coming out of camp was well earned. Claypool displayed his complete skill set as a receiver on a 84 yard touchdown reception that was a thing of beauty. Throw in a couple of additional catches, some solid blocking in the running game, and three special teams tackles and you can see why Claypool could easily have been selected for the distinction.

However, my selection for this week’s player who’s stock is trending up is one of the grunts on the offensive line that seldom get the recognition required to qualify. Trust me folks, this young man’s recognition is well deserved.

Kevin Dotson’s journey to the NFL is a story of inspiration and determination. I feel certain there will be plenty of articles written in the next few days about his perseverance. I want to focus on his unbelievable performance against the Broncos. One desperately needed and appreciated by Ben Roethlisberger and his teammates.

Just how good was Dotson, a rookie who didn’t have the benefit of a single preseason snap. A novice football fan would never have known he was in the game. Obscurity is one of the biggest compliments you can give a offensive lineman.

That means no holding calls or false starts that require the referee mentions your existence, or getting blown off the ball while run blocking, or heaven forbid giving up a sack of your “getting a little long in the tooth” franchise QB. That is the kind of attention no offensive lineman strives for.

None of that negative attention for Dotson. Instead he was a shear delight to behold for any Oline aficionado. The young man was a bulldozer of a lineman, a immovable force of nature.

Dotson engages, maintains, and finishes his blocks. Simple as that, regardless of the opponent. Sunday afternoon he walked up to the line of scrimmage, looked five time straight Pro Bowl DT Jurrell Casey right in the eyes, and preceded to shut him down. The youngster manhandles enormous individuals, and moves them out of the way against their will. This is more than just technique and leverage, this is pure power and force.

Dotson was given the game ball by his future HOF QB after the game for his performance. I believe that says it all.

Before any readers decide to drag me over the coals, hear me out. I am referring to Tomlin’s continued struggles on when and if to throw the challenge flag.

Last season my angst in these situations diminished substantially, but that old familiar feeling returned in a big way against the Broncos.

In the first half, Cameron Heyward knocked the ball out of Broncos QB Jeff Driskel’s grasp before he was taken to the ground by Mike Hilton for a sack. The replay showed what appeared to be a fumble, but no challenge by the Steelers.

In the second half, with the Steelers already down a timeout that was wasted prior to a unsuccessful fourth down attempt on offense earlier in the third quarter, Tomlin threw the challenge flag on a sideline catch by Broncos TE Noah Fant. The replay showed the catch and absolutely no evidence to suggest otherwise. Bad challenge and another wasted timeout. I was under the impression that Assistant Coach Teryl Austin was supposed to be helping him in these situations.

It’s almost as if Tomlin is hoping for some good fortune, that the play will be overturned somehow, without the benefit of evidence. Hopes and wishes do not equate to a successful challenge. This has to be rectified before it cost the Steelers a game.

After the Steelers complete destruction of the New York Giants offense in Week 1, I saw a couple of articles comparing this Steelers defense to the 1976 Steel Curtain squad. For anybody old enough to remember the Steel Curtain defense at it’s peak, the comparison is laughable.

It’s nearly impossible to compare two separate eras accurately and fairly to both. The game, and the size and physicality of the players, has completely changed. But that’s not what makes the comparison so absurd.

Those Steel Curtain defenses new exactly who they were, and their identity was well established. The current Steelers defense is still trying to find theirs.

With Ben back behind center, the Steelers coaches are confident that the offense will put points on the board, so the defense has come out ultra aggressive. The Steelers pass rush is as formidable as ever, sacking and disrupting the opposing QBs at every turn. However, the constant aggression approach might not be the best style for all their players, or for every upcoming opponent.

The Steelers are putting additional pressure on their excellent secondary, and are achieving mixed results.

Steven Nelson had a nice bounce back performance Sunday, but Joe Haden still doesn’t seem comfortable with some of the changes. He has picked up a pass interference penalty in both games, and let Broncos WR Courtland Sutton burn him deep for a long gain. Sutton is the definition of a one trick pony. That was unacceptable for a veteran corner.

Terrell Edmunds played solid as usual, but this week almost made an interception along the sidelines while breaking up a pass, and made the game clinching sack on fourth down to stop the Broncos last drive. But what is going on with Minkah Fitzpatrick? I was touting Fitzpatrick as a DPOY candidate prior to the season, but he is another player that doesn’t seem entirely comfortable at this early stage of the season. He seems unsure, borderline tentative at times. Stuck between wanting to be aggressive and make a big play, while also adhering to the integrity of his responsibility on the play. It is honestly a tightrope he is struggling to walk at the moment.

The Steelers defense is still searching for their identity, between being aggressively dominant and fundamentally sound. Hopefully they will meet in the middle one day soon.