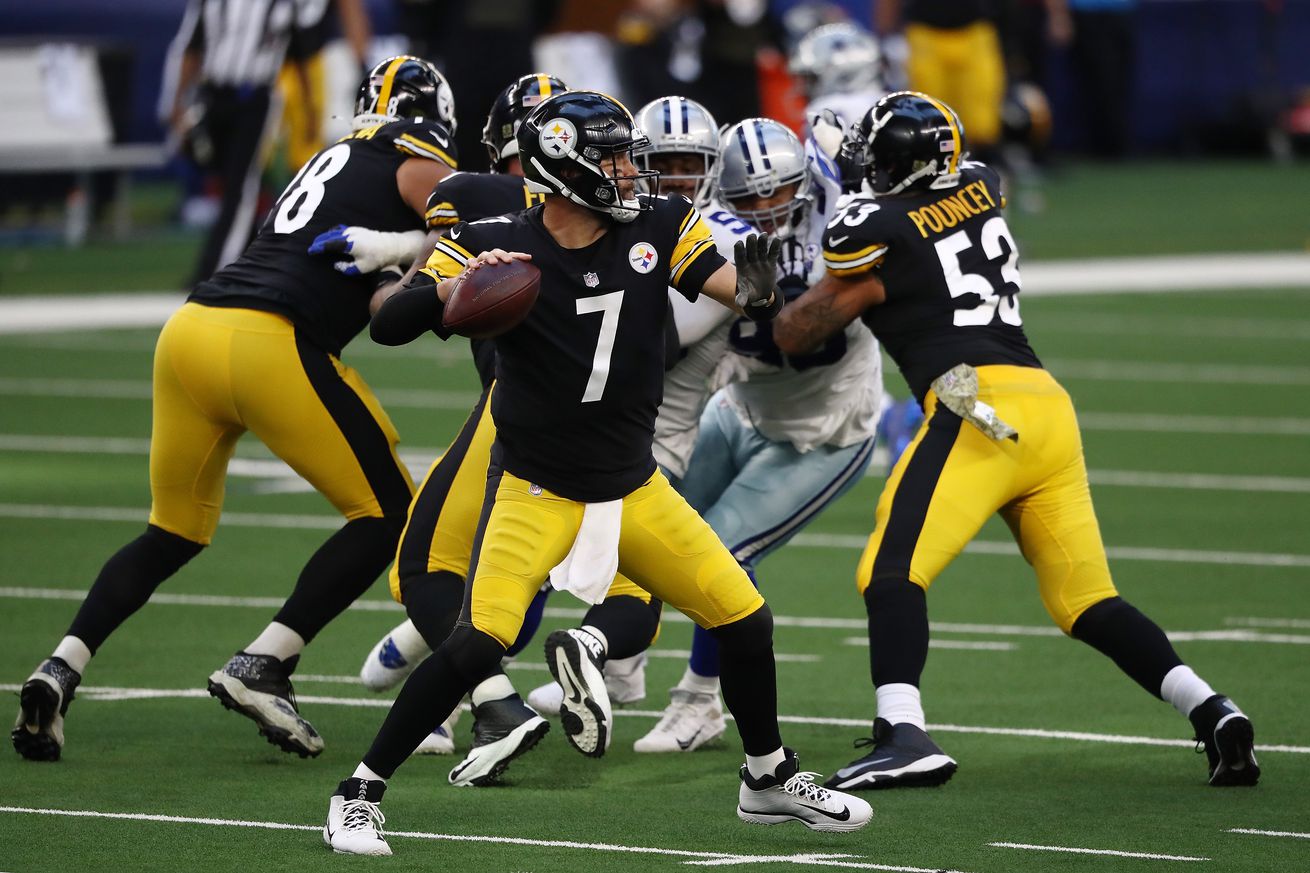 Sunday’s Steelers game against the Cowboys wasn’t pretty—and it was almost tragic—but they survived to improve to 8-0 for the first time in franchise history.

Suffering the first loss of the season against a quarterback named Garrett Gilbert. Now, that would have been the most 2020 thing ever.

Thankfully, for the Steelers, they didn’t have to endure such an ugly chapter in such a crazy year, as they outlasted the Cowboys, 24-19, at AT&T Stadium on Sunday evening to improve to 8-0 for the first time in franchise history.

The Steelers not only survived a Dallas team that came into the day with a 2-6 record and was down to its fourth-string quarterback, but they also survived what would have been an even worse fate—a serious injury to quarterback Ben Roethlisberger.

With Pittsburgh trying desperately to climb back into a game it was inexplicably trailing, 13-0, late in the first half, Roethlisberger injured his left knee on a play in which he was sandwiched in-between two Cowboys’ defenders.

Was it a torn meniscus? How about a sprained MCL? Could it have been even worse? This was all being speculated as Roethlisberger looked about as good as he had all first half, leading the Steelers on their first touchdown drive of the afternoon to make it 13-6. Roethlisberger immediately exited for the locker room with still 1:10 left in the second quarter and wasn’t available to lead the offense after safety Minkah Fitzpatrick recovered a CeeDee Lamb fumble at the Dallas 38. Instead, it was Mason Rudolph, who looked about as shaky as he did for most of 2019 on a four-play drive that netted minus-two yards.

The Steelers drew closer at the break on a Chris Boswell 59-yard field goal, but the real story at halftime was the health of Roethlisberger. Without him, well, forget about the top seed and probably the division title. At that point, it likely would have been a matter of holding on for dear life over the second half of the season just to clinch a wildcard berth.

Thankfully, Roethlisberger was fine and played the second half, but even with him, the offense didn’t look all that great. Sure, it was good enough to put up 15 second-half points, including the eventual game-winning touchdown to tight end Eric Ebron with 2:14 remaining, but it just felt off all game.

While the offense was kind of suspect, the defense was again gashed on the ground, this time to the tune of 144 yards. Yes, it created a couple of huge takeaways, including a big fourth-quarter interception by Fitzpatrick in the end zone that prevented the Cowboys from extending a 19-15 advantage. But it would appear Keith Butler’s unit misses Tyson Alualu badly, same with cornerback Mike Hilton, who missed his third-straight game on Sunday. As for the newly acquired Avery Williamson, the Steelers might need him to play inside linebacker more than they even know.

However, as ordinary as the offense and defense both looked, they weren’t nearly as inept as the special teams. Boswell missed one extra point and had a second blocked. As for the coverage unit, it allowed two long returns—one on a punt and another one a short kickoff from midfield. Just how bad were the special teams? So bad, Mike Tomlin elected to go for it on fourth and one with the Steelers ahead by five inside of two minutes, because he was afraid a field goal attempt would be blocked.

Just like a week earlier against the 2019 NFL MVP, Lamar Jackson, Sunday’s game came down to a last-gasp pass into the end zone. Only, this time, it was attempted by a journeyman quarterback, who turned in a better performance than either Devlin Hodges or Rudolph did all last season.

But despite their best efforts to hand Tomlin his first “Tomlin loss” of the season, the Steelers prevailed. They’re 8-0 and still the only undefeated team in the NFL. They still have a two-game lead on the Ravens, who defeated the Colts to improve to 6-2. Pittsburgh still has the pole position for the race to the top seed in the AFC.

Again, they survived, both the game and an injury to their most valuable commodity.

How long can they continue to play like this and keep winning? That remains to be seen, but they played their worst game of the season on Sunday and still managed to come out smelling like a Texas rose.