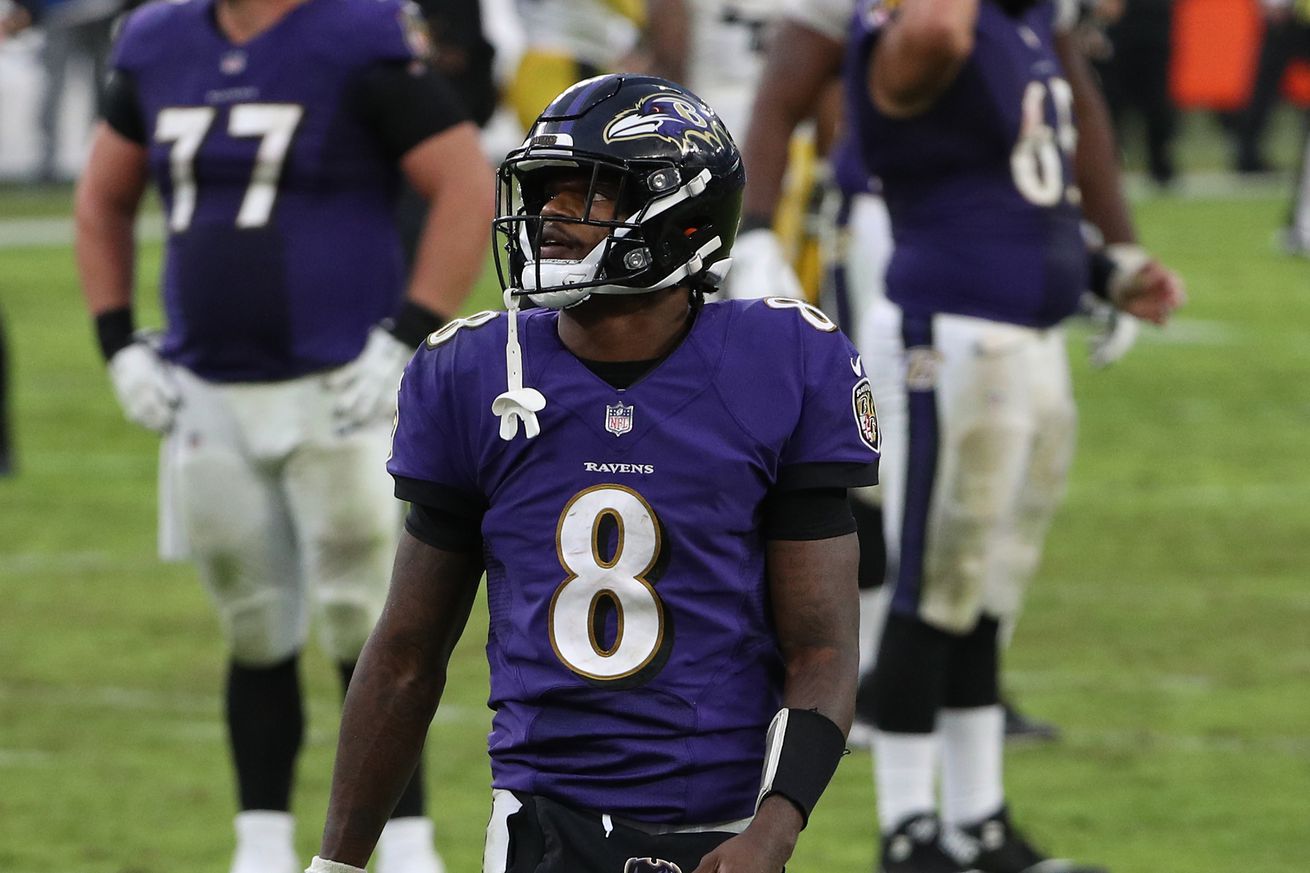 Did the officials screw over the Ravens during their loss to the Steelers on Sunday? Nah, it was their MVP quarterback, Lamar Jackson.

Should the Ravens have been granted an extra play at the end of their Week 8 game on Sunday, a 28-24 loss to their AFC North rivals, the Steelers, at M&T Bank Stadium?

No, of course not. That’s ridiculous. The only people who thought that Steelers safety Minkah Fitzpatrick either interfered with Baltimore receiver Willie Snead or hit him in the helmet when he was defenseless are those wearing purple and white (and whatever other hideous colors make up the Ravens’ uniforms) glasses.

Naturally, Ravens head coach John Harbaugh was wearing those glasses when he complained to the media about the final play in-which Fitzpatrick, along with second-year corner Justin Layne, teamed up to prevent Snead from catching the last-gasp pass from quarterback Lamar Jackson that would have given Baltimore a dramatic, last-second win. I don’t know if you’ve seen the play, but it was essentially a textbook example of a defender timing things just right when attempting to break up a pass

Considering sports fans—but especially Ravens fans—are irrational, they’ve been crying for a few days about the fix being in in favor of Pittsburgh (I guess someone forgot to remind the official who threw the flag on Fitzpatrick for the sideline hit by Cameron Heyward on a still-inbounds Jackson early in the first quarter).

Because of what transpired at the end of Sunday’s game, the Steelers’ victory is now mired in controversy—at least for those who are popping purple and white (and whatever other hideous colors make up those Ravens’ uniforms) pills.

What Harbaugh and the rest of the Ravens’ supporters should really be angry about—what should really be mired in controversy—was the play of Jackson, the franchise quarterback, the reigning NFL MVP, the guy that stirs the drink in Baltimore.

That was the difference in the game. In many ways, the Ravens’ outplayed the Steelers on Sunday. Baltimore won the rushing battle, 265-48. The ravens won the total yardage battle, 457-221. The only difference was Jackson’s failure to come through in big moments. Heck, he didn’t even have to do that, necessarily. He just simply had to avoid an interception at the beginning of the game—Robert Spillane returned that for a touchdown—and another at the beginning of the third quarter—Pittsburgh converted Alex Highsmith’s first-career interception into the go-ahead score—in order to lead his team to victory and first place in the AFC North.

In addition to the 14 points the Steelers generated from Jackson’s two interceptions, they prevented at least three more when Bud Dupree stripped the third-year quarterback of the football near the goal line in the first quarter.

All-in-all, Jackson was responsible for four turnovers on the day.

You’re not going to win many football games when your quarterback does that.

To reiterate, if I’m in Baltimore and/or a Ravens fan, I’m pretty darn mad at Jackson and his failure to produce in a big game.

How many times has it been, now? He hasn’t won a playoff game; he hasn’t defeated the Chiefs; and his worst two performances have occurred against the one team that is always fighting his Ravens for AFC North supremacy.

Until Jackson proves he can take it to another level when the stakes are high, the Ravens ain’t flying anywhere. That might seem harsh, but it’s the reality every franchise quarterback must face until he doesn’t.

Ben Roethlisberger had to deal with the doubts early on. Peyton Manning had to deal with them for nearly a decade. Folks even doubted John Elway’s credentials until he finally won a title late in his career. As far as some are concerned, Jim Kelly and Dan Marino, two Hall of Famers who appeared in five Super Bowls without winning any, never really proved anything beyond an ability to fill up the stat-sheet.

This is Jackson’s mission. He’s better than Baker Mayfield and many of the other young quarterbacks in the NFL. But does he have what it takes to be included in the same class as Aaron Rodgers, Russell Wilson, Patrick Mahomes or Roethlisberger, the veteran AFC North quarterback who didn’t turn the football over once on Sunday?

Roethlisberger’s never been named NFL MVP, but he has won two Super Bowls. Unfortunately for Jackson, that’s the only hardware that will truly validate him in the eyes of many.

Read these words carefully, Ravens fans: Your team lost on Sunday because your quarterback once again failed to come through when the stakes were high.