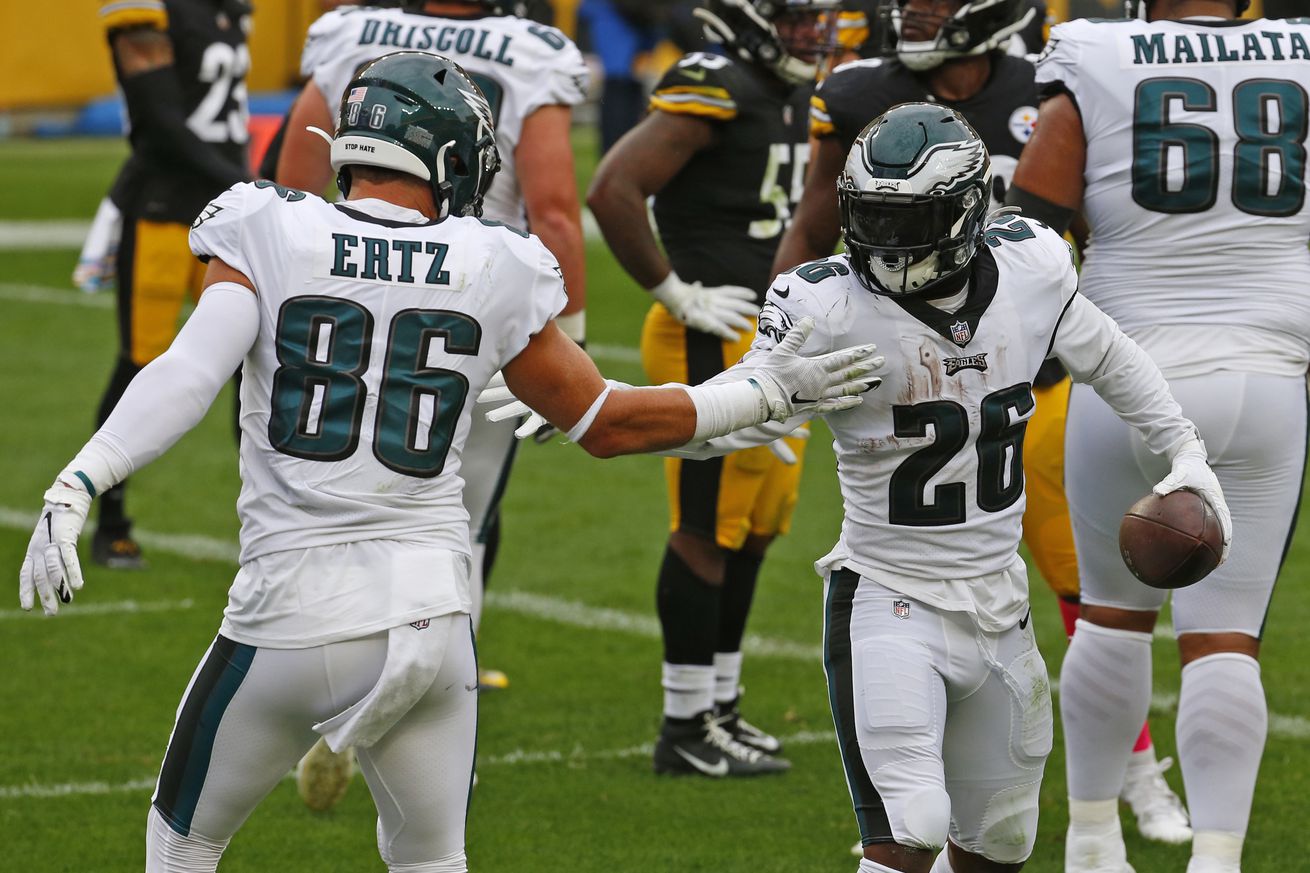 I don’t think anyone has forgotten the play.

The Pittsburgh Steelers defense had denied the Philadelphia Eagles even a single first down on their first two drives, and after the second the Steelers drove 62 yards in 16 plays, capping the drive with a 2 yard Chase Claypool jet sweep touchdown.

The Steelers defense went right back to work, a one yard run and an incomplete pass later the Eagles were facing a 3rd down and 9 at their own 26 yard line, one play away from punting a third straight time to a Steelers offense that was moving the ball effectively. The Steelers force a punt there, drive down and score again, and maybe things start to fall apart for the Eagles. But that isn’t what happened.

This play would kick start a shootout that would see 8 scores in the next 11 drives, the first 30+ point game in a long time for the Steelers and breakout games by two receivers who caught their first NFL passes this season.

This run deserves a deeper look, because while it is easy to see the Steelers didn’t succeed in stopping Miles Sanders at any point in this play, why they failed is a giant string of doing exactly the wrong things on exactly the wrong play.

Let’s start with the defensive line.

It’s 3rd and nine, to this point Carson Wentz had dropped back 5 times, he was 1-4 for 5 yards with a sack by T.J. Watt that cost the Eagles 8 yards. The Steelers came out looking for yet another Wentz pass attempt and dialed up a nasty pass rush.

From screen left to right:

T.J. Watt is just rushing upfield, he’s one of the best in the NFL at it, and the Steelers are turning him loose. Stephon Tuitt lines up to screen right of the center, and his job is to cross the center’s face to potentially occupy a double team that will keep help away from both outside rushes, but mostly makes sure the Eagles can’t slide three lineman toward Cam Hayward and Bud Dupree. Cam Heyward and Bud Dupree are running a stunt, Heyward rushes straight upfield, getting between the guard and tackle to seal the tackle outside and with his hand driving into the guard he is making it difficult for the guard to switch and pick up Dupree as he loops inside.

It’s a great pass rush. It’s not good run defense. If fact it is awful run defense. Cam Heyward and Stephon Tuitt are both moving away from the run lane, and Bud Dupree will be too late to do anything but watch Miles Sanders run by.

The offensive line didn’t need to block well, they just needed to allow the Steelers defensive line to do what they wanted.

Next we’ll look at the other four players in that clip; Devin Bush, Mike Hilton, Minkah Fitzpatrick and Cameron Sutton.

Stephon Tuitt crossing the center leaves that center with nothing better to do but step up and block Devin Bush, and with Bush playing up close to the line, it isn’t hard for 3-time all-pro center Jason Kelce to lock him up and hold him just long enough to make Bush a non-factor. Bush actually does a good job shedding Kelce, but when the refs don’t call hanging on to a players arm as they try to run away from you a hold, it makes the blocker’s job a lot easier.

Mike HIlton is dropping into the middle because he needs to be there to pick up Travis Fulgham (who hadn’t yet been targeted in the game) if he runs an in-breaking route. Hilton sees the run, but a nice juke/hurdle by Miles Sanders leaves Hilton eating grass.

Minkah Fitzpatrick reads the play from his deep safety position but is blocked by Travis Fulgham and taken out of the play.

Cameron Sutton enters the play from the right side of the screen. He’s blitzing. Cameron Sutton is not a good blitzer or run defender, and it shows here as he is never a factor in the play.

Not only did the Steelers take Cameron Sutton out of the play by blitzing him, they took another player, a much better run defender, out of the play in order to blitz Sutton.

Terrell Edmunds is the safety lined up behind Cameron Sutton.

The Steelers blitz Sutton, and put Edmunds in man on Greg Ward. Edmunds isn’t reading run at all, and finds out it’s a run when the receiver he is covering turns and blocks him over 25 yards downfield. If Sutton isn’t blitzing here, and Edmunds is reading the play, Sanders isn’t likely to make it past the 30 yard line, and the Eagles are punting.

The only other defenders on the field are Steven Nelson and Joe Haden. Haden is on the far side covering a receiver, and Nelson is blocked well (and cleanly) by JJ Arcega-Whiteside, a big receiver who is known as a good blocker.

One of the beautiful things about football is how a single event can affect an entire game, and this run was one of those events. It swung momentum and jump-started an Eagles offense that had run 8 plays for -2 yards before that run. A run that followed a perfect storm of choices that turned a 3rd and long draw play, one of the least threatening plays in a football game, into a 74 yard touchdown.

The Steelers offense would answer the challenge and when the offensive explosion finally started dying down it was the Steelers defense who was ending drives, and the Steelers who walked away winners.