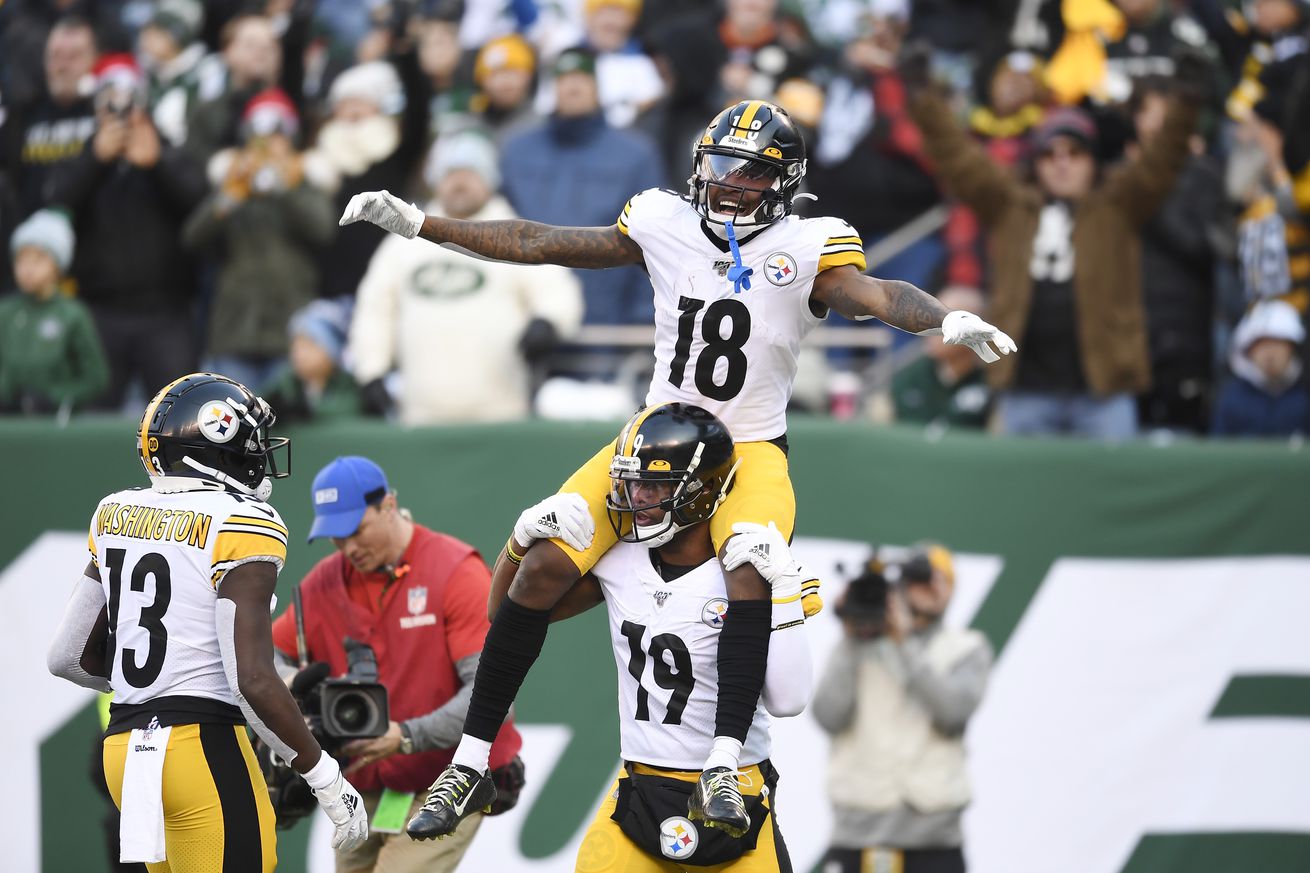 Do the Steelers have a number one receiver on their roster right now? Not in terms of stature, but in terms of potential, they have three strong candidates emerging for 2020.

As they begin to prepare for the 2020 regular season, there seems to be a perception out there that the Steelers are missing a bona fide number one receiver.

In terms of stature? Perhaps. JuJu Smith-Schuster, the 2017 second-round pick out of USC, was supposed to step up a season ago and fill the number one receiver shoes vacated by Antonio Brown and his made-for-social media epic, Escape from Pittsburgh.

Things didn’t go as planned for Smith-Schuster. After catching a combined 159 passes for 2,342 yards and 14 touchdowns over his first two seasons, No. 19 accounted for just 42 receptions for 552 yards and three scores in 2019.

But when you see those numbers in text, and when you factor in just how compromised the offense was with the mostly season-long absence of Ben Roethlisberger at quarterback, Smith-Schuster’s stat-line doesn’t look all that bad.

One might say it was a byproduct of a number of different things that conspired against the still young wide-out—including injuries, the loss of his quarterback and receiving coach very early on, as well as the addition of weekly escorts up and down the field known as double-teams by opposing defenses.

But at least the other two young and highly pedigreed receivers—2018 second-round pick James Washington and 2019 third-round pick Diontae Johnson—seemed to benefit from the attention given to Smith-Schuster.

There were many unanswered questions surrounding Washington as he entered his second season. But after a rather lackluster start in 2019, Washington followed-up his horrible rookie year (16 catches for just 217 yards and one score) by tallying 44 receptions for 735 yards and three touchdowns.

That brings me to the third wheel of this young receiving trio. I’m talking about Johnson and a rookie season in-which he displayed the AB-like skill-set everyone said he had coming out of Toledo. Not only did Johnson catch 59 passes for 680 yards and five touchdowns, he showed off his punt return prowess with an 85-yard score against the Cardinals.

No, none of these receivers put up number one-like numbers in 2019, but when you take a step back and realize the limitations that existed at the quarterback position thanks to the on-the-job training of both Mason Rudolph and Devlin Hodges, maybe you can appreciate what the youngsters were able to accomplish.

Not only do I think the Steelers next true number one receiver is already on the roster, it appears there are three strong candidates to compete for the role.

I think there’s a lot to be optimistic about when it comes to the Steelers and their three young receivers in 2020.

What about beyond that? After all, Smith-Schuster is set to be a free agent after next season. However, if he returns to his Pro Bowl form in 2020, I have no doubt the Steelers will do whatever they can to bring him back—after all, that is their business model when it comes to young superstars.

So do the Steelers need to address the receiver position with an expensive free agent or high draft pick? Nah. The position of wide receiver has been addressed quite nicely in recent draft classes.

Now it’s just time to sit back and watch the unit grow into something special.