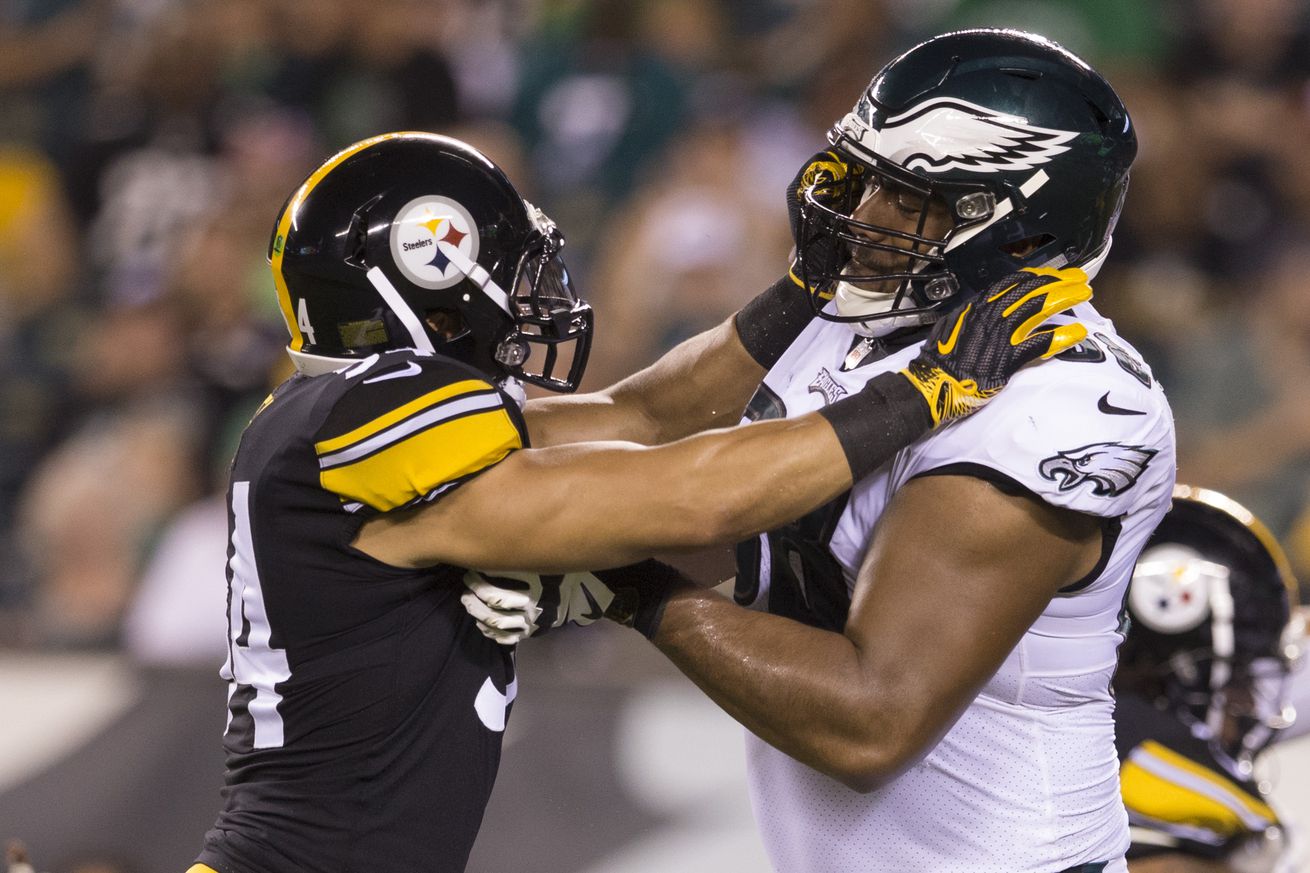 The staff at BTSC share their thoughts and predict the outcome of the Steelers home game against the Philadelphia Eagles.

Although it seems like forever, the Steelers are back to the gridiron and looking to go to 4-0 vs. their cross-state foe, the Philadelphia Eagles. With the layoff, could the black-and-gold have lost some momentum?

The contributors at BTSC have recorded their thoughts and predictions. Let’s see who’s closest to the mark and furthest from reality. Last time, K.T. Smith came closest to the mark by forecasting a 31-20 Steelers win. It is Smith’s second win in three games, as he narrowly defeated co-editors Dave Schofield and Jeff Hartman. Who will it be with bragging rights this week?

I would love to tell you all the reasons this game should be a competitive, wire-to-wire affair. But, then I think I would be lying to you. The Steelers should take care of business against a reeling Eagles team that is ravaged by injury, especially coming off of a bye. The Steelers defense should have one of those days to remember and have their way with Carson Wentz and company. The Steelers offense will also break 30 points for the first time of the season.

The Steelers since 2004 are 2-0 against the Eagles in Pittsburgh, and 0-2 in Philadelphia. This game is in Pittsburgh. The Steelers defense is #1 in sack rate in the NFL, the Eagles are #2. The Steelers allow the 9th lowest sack rate, the Eagles the 23rd. This game will be won and lost in the trenches, and I’m picking the Steelers to win that battle on both sides. The question that I have is if the offense will be able to run out the clock effectively for a 4th straight game without the services of Derek Watt at fullback. Last week the Steelers had to throw the ball for the first time on a game ending drive. You don’t want to give Carson Wentz too many chances to mount a comeback.

The Steelers have struggled against the Eagles more than any other team in the NFL going 4-8 against Phily since 1969. This won’t be a cake walk. Everybody goes home with baked goods and it’s easy. I still think the Steelers are on a mission and the Eagles are in flux. The Steelers will win, but not in the blowout fashion that many expect.

G’day Steeler Nation are you ready for some football? The Pittsburgh Steelers are back and ready to take on a struggling Eagle outfit. This is a huge game for the Steelers’ season. A solid win here should finally put the Steelers in the spotlight as a playoff contender. So far this season the Steelers are flying under the radar, however, that’s not a bad thing. Steel city improves to 4-0, here we go!

I’m sure the Steelers and their fans are worried about an Eagles pass rush that has already generated 17 sacks and 39 quarterback hits. They’re likely also a bit concerned about quarterback Carson Wentz and his mobility. Tight end Zach Ertz, he being of the elite variety, will also cause some sleepless night. But I’m sure the Eagles and their fans are a bit concerned about Pittsburgh’s pass rush, one that has two less sacks and the same amount of quarterback hits despite playing one less game. As for quarterback Ben Roethlisberger, he’s no slouch, and his array of weapons extend far-beyond the tight end position. The Steelers will also be playing at home and in front of some fans. I look for this to be the easiest victory of the season thus far:

There are a lot of people who are predicting the Steelers offense to explode in Week 5 vs. the Eagles, but I just don’t see it. The Steelers have had success after the bye under Mike Tomlin, but the offense usually is sluggish coming off the off week. Could I be wrong and the Steelers’ offense blow the Eagles’ doors off? Sure, but that doesn’t mean I am predicting that to take place. I think this is a close game, and the Eagles will play tough. Throw in the fact their defensive front could give the Steelers’ line fits, and I’ll take the Eagles getting 7 points via the spread, but I’ll take the Steelers to win a close game to advance their record to 4-0.

This week’s game against Philly is such a toss up between the Steelers ripping through the turbulent Eagles, or stalling in a close battle against their intra-state rivals. I expect (or hope) the Steelers come out raring to play after a disrupted Week 4, which led to no game against the Titans. The Defense needs to eat, with players like Tuitt, Fitzpatrick and T.J. Watt feasting all day long. Similarly, on the offensive side wouldn’t it be great to see Claypool break one for long yardage? Eric Ebron to pick-up where he left off with another big red-zone play? And Anthony McFarland Jr. make a long splash-play rush? I predict it to be a fairly close game through half-time, before the Steelers pull away at the end of Quarter 3 through explosive defense and clinical offense.

My eternal Steelers optimism is really showing this week as I feel it could be a perfect storm in favor of the Black & Gold. Between the chip on the shoulder from the events of Week 4 to the Eagles makeshift offense of line, compounded with fans finally being in the stands, the Steelers have a chance to run away with this game. Although it may not play out that way, I’m rolling with it.

For me, this is the trickiest of the games we’ve had to predict so far. Philly has not looked great by any stretch, which could create complacency in a Steelers team that (stop me if you’ve heard this before) occasionally plays down to weaker competition. Yet the Eagles lead the putrid NFC East at 1-2-1 and always seem to play hard against their more accomplished cross-state neighbor. The Steelers, meanwhile, had a nice rhythm going until being unexpectedly sidelined by Tennessee’s COVID debacle. Can Pittsburgh pick up where they left off two weeks ago? Did the Eagles right their ship with last week’s win in San Francisco? Will the Steelers look past Philly with a big game against Cleveland on the horizon? I don’t know. This feels like a tricky spot. I’m picking the Steelers but my confidence meter ain’t exactly booming.

My concern for this week’s game isn’t entirely rational, but for some unknown reason the Steelers usually struggle when playing the Eagles. Maybe it has something to do with their shared history, but the talent level and record of both teams at the time don’t seem to matter. For comparison, consider the Steelers unexplainable struggles playing the Raiders in Oakland.

The Eagles will undoubtedly attempt to establish the running game early, and go max protect to keep Wentz upright. Keith Butler and his staff have to be aware and plan accordingly.

The Eagles defense will consistently attack the line of scrimmage until the Steelers offensive line proves they can handle the pressure. The Eagles will pound Roethlisberger every chance they get, even after the throw. Expect at less a couple of roughing the passer penalties. Ben has to protect the football and make the Eagles pay for their aggression when the opportunity arises. The Eagles linebackers and secondary are vulnerable. The Steelers are the more talented team and should pull away late in a competitive contest.

Everything points to a Steelers win. Roethlisberger is playing well and has options to spread the ball around. Pittsburgh’s defense should be able to shut down an Eagles offense that already struggles against much worse defenses. The Steelers are much healthier than the Eagles and are coming off an extra week of rest.

Then again, the Eagles typically play their best when everyone counts them out. Doug Pederson get his guys to rally when the team’s back is against the wall. The Steelers can’t merely sleep on them.

What is your prediction? Let us know in the comment section below!!