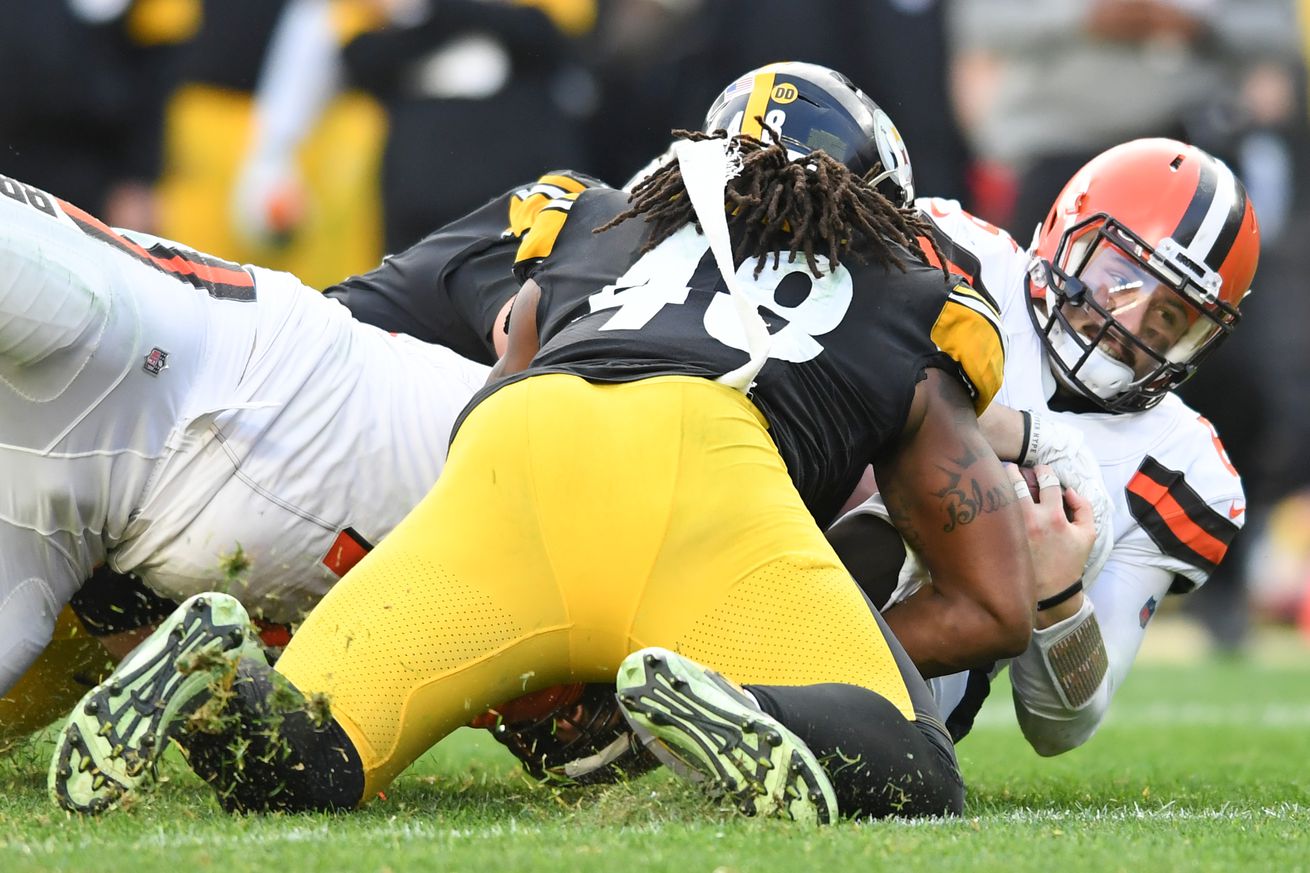 The staff at BTSC share their thoughts and predict the outcome of the Steelers home game against the 4-1 Cleveland Browns.

The Steelers four-game home stand concludes on Sunday when the black-and-gold host ptheir long-time division foe, the Cleveland Browns. In the last eleven months, this tepid and one-sided rivalry is now red hot and heated.

The contributors at BTSC have recorded their thoughts and predictions. Let’s see who’s closest to the mark and furthest from reality. Last time, Matty Peverell came closest to the mark by forecasting a 34-20 Steelers win. His partner in crime, Mark Davison, hit the Steelers’ score of 38 on the nose. Who will it be with bragging rights this week?

The Steelers will face off with their toughest opponent yet on Sunday. Slowing down this top ranked rushing attack will be key for the Steelers success. If victorious you can expect a great all around day by the defense, and Ben Roethlisberger continuing his efficient start to the year. Home field advantage sways this game in the Steelers favor.

The Steelers win because the Steelers struggling secondary are still better than Baker Mayfield, and those Chase Claypool, Eric Ebron combo routes are too much for the Browns to handle. Watch out for the Browns TEs, the Steelers have one matchup canceler on this team, and the Browns gave them problems last year when they had two.

While Kareem Hunt and Myles Garrett are still certified pieces of crap, the brand of football can no longer be certified as “when it’s brown, flush it down” in Cleveland. If this game was in Cleveland, I’d almost certainly hang an “L” on our black-and-gold. It bothers me that Hunt is using Garrett’s criminal actions as motivation for revenge this week. If the remainder of the team is buying that garbage, then it’s pretty sad. On the field, the Browns are really good. But I think the Steelers are pretty good as well. The best running game against the finest rushing defense in the NFL makes this a five-star matchup. I think this game ultimately comes down to quarterback play. I’m taking Ben over Baker.

Stop the presses! The Cleveland Browns are 4-1! The last time I remember the Browns being relevant in the AFC North was when Peyton Hillis had a huge year in 2010. The Browns finished 5-11 in 2010, and if the Steelers’ players show up on Sunday hopefully they can steer them down that hole again. A massive game between two AFC North teams and a test for both franchises. Will the Steelers show dominance and powder-bomb their little brother? Or will the Browns finally out smart the Steelers and improve to 5-1? I believe the Steelers fix their secondary mistakes and force Baker into a turnover machine.

The Browns are damn good at running the football (188.4 yards per game), but the Steelers are even better at stopping the run (64 yards per game). That brings me to the defenses for both teams. The Steelers may be struggling a bit, so far, but Cleveland’s defense has been a bit worse, allowing nearly 30 points per game. Gee, that’s about how much Pittsburgh’s offense has been scoring every week. Also, Ben Roethlisberger>Baker Mayfield, and Steelers>Browns in big games like these.

Many are considering this to be the first real test for the Steelers, and I would agree with that sentiment. The 4-1 Browns pose a legitimate threat to the Steelers’ perfect season, but I see this game as one which will have the Steelers’ full attention. I trust Mike Tomlin in big games more than I do in ones where the Steelers are heavily favored. This is a let’s see what you’re made of type of game, and I think the Steelers respond in a big way.

Steelers are 4-0! So the haters can eat crow. This is the week for the Steelers to get the respect of the NFL and mainstream pundits by sending the Browns down a losing spiral. It ain’t going to be easy for our men in black and gold, every Steelers player has to do their bit, whether its Watt electrocuting Baker with QB hits and sacks, Bud ‘Debris’ Dupree laying waste to their backfield and Steven Nelson shutting down Odell Beckam Jr. or Jarvis Landry. As what seems like every week so far this season, I’m predicting it to be a close game at half-time before the Steelers breakaway in the third quarter, don’t be surprised if the Browns start strong and the Steelers are forced to respond.

Last week I predicted the Steelers defense coming out in “shut down mode.” Needless to say I was very disappointed, although how bad can it be when the Steelers get the win and cover the spread? As much as I want to see that “shut down” game, I’m not banking on it until I see it. This game could get out of hand either way depending on which team comes out firing. I took the middle route and said it will be close, and as bad as Baker Mayfield has been in the fourth quarter this season I think it will allow the Steelers to get the narrow victory.

The Steelers are still undefeated because they’ve been better than each of their opponents and they’ve played fairly well in each game. When the better football team plays well, they almost always win. The Steelers are still better than the Browns – not by much anymore, but they are better – and I think they’ll rise to the challenge of playing in their biggest game of the season so far. Pittsburgh withstands a challenge and plays well enough to win again.

The Cleveland Browns have been stock piling talent for years, but didn’t have the QB and coaching staff to utilize it properly. HC Kevin Stefanski and QB Baker Mayfield are in the process of developing chemistry and trust, but the early results are promising. To be the man, you have got to beat the man. Ben Roethlisberger is the man, and he has owned the Browns in his career. Last season’s Browns win in Cleveland was meaningless because Ben was out injured. The Steelers can’t afford to be Cleveland’s signature win.

We’ll see if my answer changes before Sunday, but I’ll take the Steelers. Pittsburgh’s defense has the best sack rate in the NFL, and while Baker Mayfield has been kept pretty clean by his offensive line, he is currently dealing with a rib injury suffered in last week’s game. Wyatt Teller likely being out is a big loss for the running game in this type of game with how well he was playing. I don’t see the Browns’ offense being as explosive this week with those factors in mind, and despite Myles Garrett’s game-changing ability, Ben Roethlisberger should do like most other teams have done and take advantage of the linebackers and safeties in coverage.