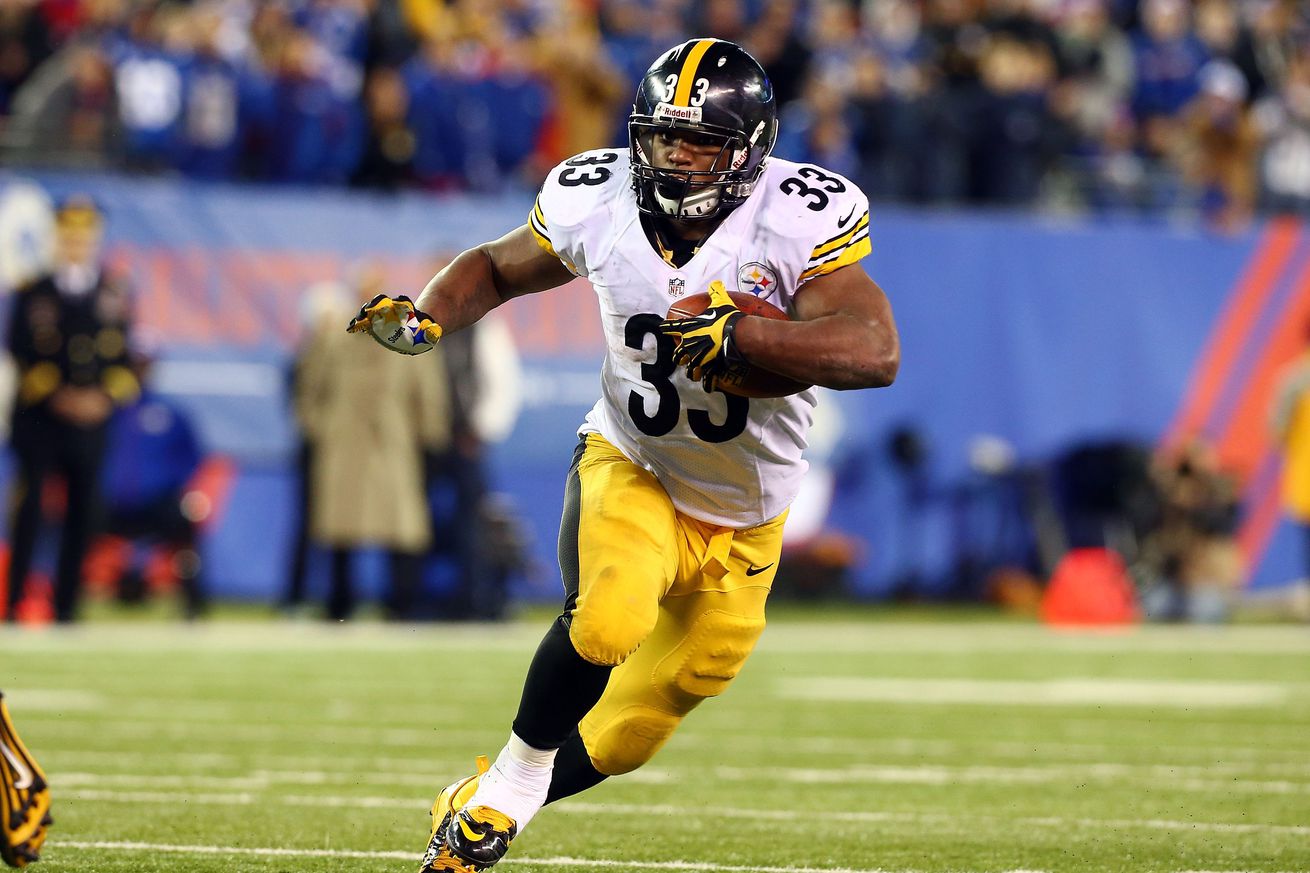 BTSC writers nominate players for the award, and you vote.

The 2020 off-season has been a unique journey for NFL teams, media and fans. The rosters aren’t as big as they normally are at camp, and the information available about fringe players is minimal. There haven’t been eyewitness stories like we’d get from St. Vincent college, and with no preseason games being played we won’t have any preseason heroes either. But that doesn’t mean we can’t still give out the most prestigious fan-voted award for training camp performance in Steelers nation.

Isaac Redman was a camp phenom in 2009, winning the hearts of Steelers nation, but in 2009 he wouldn’t touch the ball at all. In 2010 he came back in much better shape and earned a place on the roster, and was proclaimed the teams goal line back by Mike Tomlin. Isaac Redman didn’t score a rushing touchdown in 2010, but he did score a phenomenal game winning touchdown to beat the Ravens on a pass.

In 2011 Redman gained a bigger role in the offense and in 2012 he started 5 games. Isaac Redman started out a camp darling, and over the course of 4 years turned that into being an important part of the team.

For the 2020 award, BTSC writers get the chance to nominate a player, and argue for why they are the most worthy Steeler to take the mantle as the 2020 Isaac Redman Award winner.

Here are the rules, handed down to us in 2014 by Neal Coolong:

For this season we want to focus on the spirit of Isaac Redman, and as such are not limiting nominations to strictly fulfilling these rules. After all, Isaac Redman didn’t stop being Isaac Redman in 2012, he continued to improve and expand his impact and role on the team.

We are going to let you, the readers, decide what players are worthy, and you can decide how strict you want to apply the rules. The spirit of the award is still for the player who is defying the odds and sparking our imagination, vote accordingly.

Past winners of this award:

This off season saw the departure of two Isaac Redman award winners, Tyler Matakevich and Roosevelt Nix, leaving only 2014 winner Daniel McCullers and 2019 winner Tuzar Skipper currently on the team.

Read the nominations, and vote for your favorite.

Dave Schofield: The best player I can think of is Ray-Ray McCloud. He was a 6th-round pick of the Buffalo Bills in 2018 and has two training camps under his belt. But McCloud didn’t join the Steelers until their third padded practice on August 21st this season. The Steelers thought so highly of McCloud they bumped wide receiver Saeed Blacknall, who was project by some to sneak onto the Steelers’ 53-man roster, right out of camp. Blacknall did return to the Steelers’ roster a week later, but McCloud has been going strong.

Looking to squeeze into the sixth wide receiver spot, McCloud brings a lot to the special team’s game as he can be both a returner and a gunner in coverage. Making his case for a spot, Ray-Ray began the Steelers’ simulated away game last Friday night with a kickoff return for a touchdown. He could be the “diamond in the rough” the Steelers grabbed off the street who fills the need to a whole new level where the Steelers previously used Johnny Holton and Darrius Heyward-Bey.

KT Smith: All Steelers’ fans will need to fall in love with sixth-round draft pick Antoine Brooks Jr. will be for the young man from the University of Maryland to run down on one kickoff and knock someone’s block off. Brooks can run and hit, which are the two traits that most likely attracted the Steelers to him in the first place. They are also two of the essential ingredients that make a good special teams player. And of course, Steelers’ fans love big hitters.

One of the reasons Redman was so popular was, in addition to his underdog status, he was a bruising runner whose penchant for bowling over defenders earned him cult-hero status. If Brooks gets in one good shot on an opposing punt or kick return sometime in the month of September, he is likely to build his own legion of devotees.

Thankfully, that legion won’t have to see him play much cover-two safety early on, where Brooks is by all accounts a work in progress. He might not even make the opening-day roster, which is the peril for all Redman candidates. A splash play or two on special teams, however, could make him the 2020 Redman recipient.

Shannon White: My selection for the 2020 Redman Award winner should come as no surprise to any readers familiar with my previous training camp articles. Ulysees Gilbert lll was my favorite to win the award after week one, and he has done nothing since that time to change my mind one bit.

Gilbert is a former sixth round selection who many pundits considered a long shot to make the team last season, mainly because of his size and the quality of the opposition during his collegiate career with the Akron Zips. Gilbert not only made the roster, but was one of the Steelers main special teams contributors prior to being injured last year.

This year he is on schedule to not only be a superior special teams performer yet again, but I fully expect him to assume the coverage responsibilities and minutes that went to the departed Mark Barron last season, at a even higher level than his predecessor.

I feel Gilbert epitomizes the spirit of the Redman Award, exceeding all expectations.

Anthony Defeo: As I wrote the other day, I’ve thought long and hard about who a worthy candidate for the 2020 Isaac Redman Award might be, and I cannot think of a single person who would do the award justice. With the limited media coverage and the lack of fan attendance at training camp, the info, quite frankly, has been paltry. What kind of motor does Carlos Davis have? Is it a high-running one? What about Saeed Blacknall’s route-tree? Has JuJu Smith-Schuster taken him under his wing? Was he grossly underutilized by his college coach? Does anyone have a cool nickname? Have fans been suspended from BTSC for arguing too much on any player’s behalf? This is the kind of information that would allow for a more informed decision. I must remain consistent in my convictions—the people demand and expect that. Therefore, I cannot, in good conscience, nominate anyone for such a prestigious award. I abstain.

Geoffrey Benedict: For my Isaac Redman nominee I am going to go with a player that captured fan interest, but has failed to live up to that interest even in training camp or preseason, at least, until this off-season.

I nominate Marcus Allen. Allen was the second safety taken by the Steelers in the 2018 draft, following first round pick Terrell Edmunds. And while Edmunds has played in every game since he was drafted and leads all Steelers defenders in snaps played in the last two seasons Marcus Allen has only played 37 snaps, and in 2019 he only played 7, all on special teams. While Allen was drafted in the 5th round, and usually ineligible for this award, I think his path through two years spent almost entirely on the practice squad make up for that, His is a redemption story, a player coming back from the brink of losing his career, instead of a player coming from nowhere right off the bat.

Allen’s path to being a contributor now seems to be taking the same route Mark Barron took when he switched from playing safety to inside linebacker. Marcus Allen is a physical safety with good size, and while he wasn’t a standout athlete for a safety, his combine numbers would rank him as a much better athlete for a linebacker.

With the Steelers needing a replacement for Mark Barron’s role covering tight ends that split out wide, who better than a 6’2” defensive back turned linebacker? Marcus Allen seems to have found his game in the NFL, playing faster and more confidently, and we already know he can hit and tackle. The former Penn State Captain who once recorded 22 tackles in a game is finally ready to bring his talents to the field for the Pittsburgh Steelers, while giving them the flexibility of a linebacker/safety hybrid that can cover, hit, and even blitz. Marcus Allen isn’t just a nice story, he’s going to fill a key role in the Steelers defense as they make their run to their seventh championship.

Vote for the Isaac Redman award

Those are the nominees, vote for the one you think is most worthy to bear the weight of Steeler Nation’s adulation. If you don’t like any of the options above, feel free to vote other and write your argument for your own nominee in the comments, Daniel McCullers won the 2014 vote as a write-in candidate, and is still on the team today (although there is a little less hype for him now).