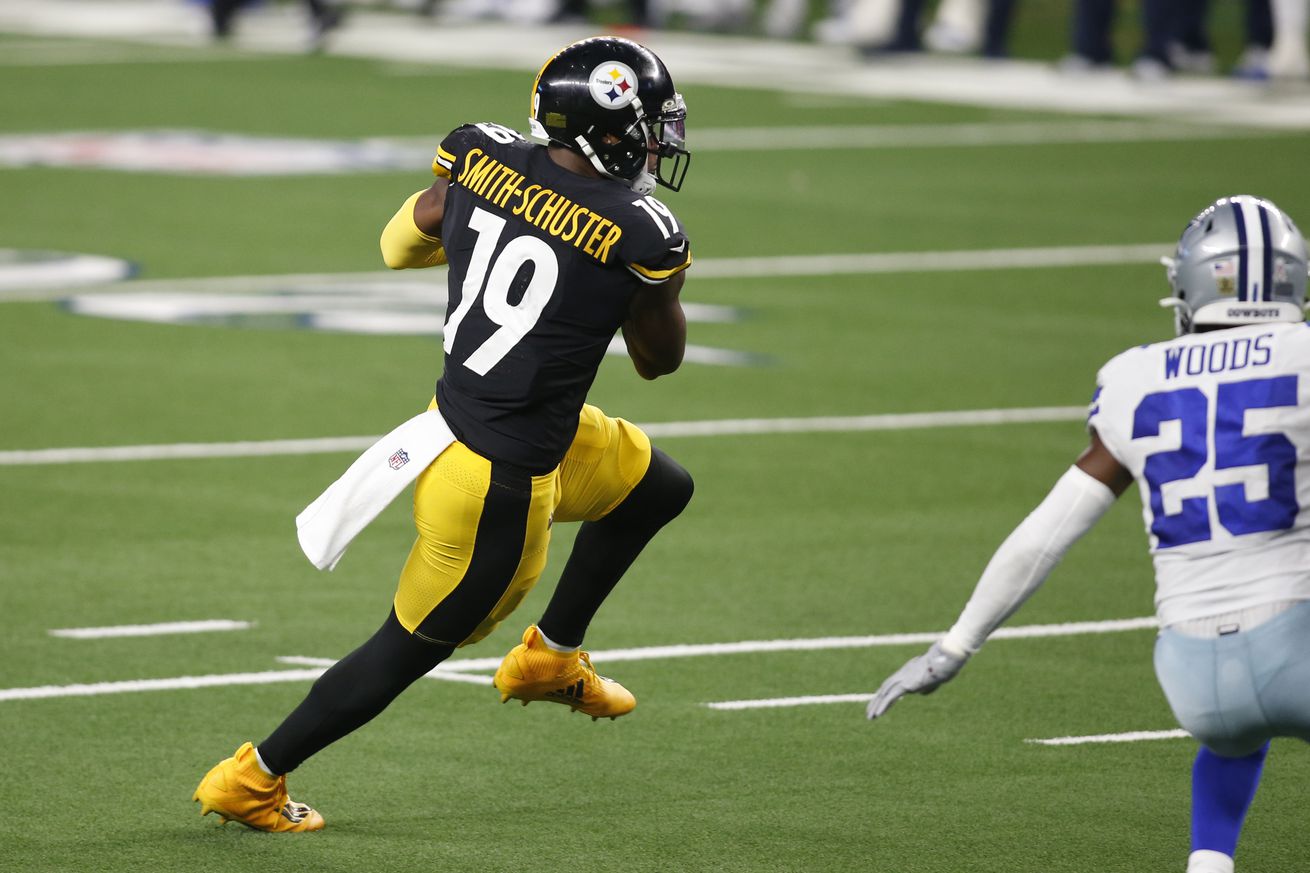 The Pittsburgh Steelers were back on the field Sunday when they played the Dallas Cowboys in Week 9 of the regular season. After the NFC East game on Sunday, it is time to see who performed well, and who left a lot to be desired.

It may have taken a while, and longer than many had hoped, but JuJu Smith-Schuster is finding his way through this new Steelers offense. Slowly but surely Smith-Schuster is becoming Roethlisberger’s security blanket, and that isn’t a bad thing. Smith-Schuster’s ability to work the middle of the field, and the knack for the timely reception, has been huge for the Steelers throughout this streak. Getting Smith-Schuster going is great news for a struggling offense.

I will admit, I was someone who was waiting for Minkah Fitzpatrick to step up and start making the kind of plays he was in 2019, and he is starting to make that type of impact once again. Fitzpatrick’s fumble recovery and interception were huge plays for the defense, and were those “in the right place at the right time” plays. When the defense needed a play, Fitzpatrick delivered. A great sign moving forward.

Who knows what Roethlisberger’s knee did to hinder his play, or the play calling, but the Steelers’ franchise quarterback put the team on his back for the second straight game and delivered in the clutch. On top of Roethlisberger fighting through injury, he has done a tremendous job protecting the football and finding the open receiver. Take away Roethlisberger’s 3 interception game vs. Tennessee and he would only have one interception on the season. You can’t underscore how well he is playing coming off his elbow surgery. 18 touchdowns to 4 interceptions is a pretty good ratio.

Stephon Tuitt has flashed. Tyson Alualu has flashed. Many fans, including myself, were wondering when it would be Heyward’s turn. That moment was in Week 9 vs. Dallas. When the defense desperately needed a stop, it was Heyward’s pressure on Garrett Gilbert which forced the turnover on downs. It should have ended the game, but it was good to see Heyward break through and make a huge play when needed.

I’ve said it before, and I’ll say it again, Watt could be on this list every single week, but this week it was how he impacted the game without being a demon in the back field. He didn’t have a ridiculous number of tackles, he didn’t pad his sack totals. No, he did it this game with his intelligence. Watt’s ability to time Gilbert’s passes and get his hands on three of them shows yet another dimension of his game. Watt isn’t just a great pass rusher, he is a great all around football player.

Kudos to Mike Tomlin for escaping this game with a victory and cementing yet another non-losing season. His decision to not kick the field goal following the Heyward sack will be criticized, and rightfully so, but you can’t ignore just how good Tomlin has been since being hired in 2007.

Yes, Chris Boswell set a new franchise record with a 59-yard field goal, but that kick never should have happened. Boswell missed a 54-yard kick, but was saved by a pre-snap penalty which nullified the play. Throw in two extra point misses and this was a forgetful game for the reliable kicker.

On top of Boswell’s struggles, the Steelers’ special teams were atrocious Sunday. What was equally as frustrating was how solid the Steelers’ special teams had been leading into Week 9. Believe it or not, I thought this was possibly the best season of Danny Smith’s career, but this game was a huge step backwards. The Cowboys lateral punt return and the botched pooch kickoff were just some of the lowlights for this crew in Dallas.

While this is labeled as the offense, it should really be the offensive line. It wasn’t as if the Steelers didn’t try to run the football in the first half, but going against the NFL’s worst rushing defense the offensive line could get absolutely no push whatsoever. They tried a slew of runners in James Conner, Benny Snell Jr. and Anthony McFarland Jr., but it didn’t matter who they threw out there. It all resulted in the same result. Failure. For the offense to be balanced, they have to be able to run the ball more efficiently.

A key statistic which often goes overlooked is how an offense does on third downs. Those key plays which can extend a drive and at the worst, flip the field. There are some times when the Steelers’ 3rd down offense has been extremely efficient, and other times it is mind-numbingly awful. 5-13 isn’t going to cut it, especially against a defense like Dallas. Look for this key metric moving forward to truly gauge how the offense is performing.

These numbers are frustrating, but the situations they failed on these fourth downs were even more infuriating. Early in the first half the Steelers passed up a Boswell field goal to go for it on fourth and inches, and Anthony McFarland was stopped short. A key point in the early stages of the game. The next, and worst, was the failed fourth down attempt with James Conner to seal the win in the fourth quarter. The offensive line just couldn’t get push against the Dallas front, and it was brutally obvious on Sunday. Winning these key downs is often the difference between a win and a loss, the Steelers were fortunate to escape with a victory.